Today we take a final look at the original X-Men team. I was always a fan of the early X-Men and was one of the disappointed fans with the cancellation /suspension of the title at issue # 66. The Silver Surfer, Nick Fury, and Doctor Strange got the boot too. It was the first time I had ever experienced comic titles being cancelled outright first hand. The excitement from the 1968 Marvel title explosion had vanished.

We now know the X-Men would take a long and serpentine road to success. The X-Men like their twin – the Avengers both had excellent starts and eerily similar runs in the beginning. I personally liked both titles #1 thru #16. In issues #17 thru #40 both titles swooned a bit and to me became pretty blasé. Around issue #40 the Avengers got their second wind with new characters and stories that included Hercules, Black Widow/Red Guardian, The Black Knight, Black Panther and the Vision. Big John Buscema’s art didn’t hurt either. They never looked back. The X-Men on the other hand, continued to nose-dive and even talented new artists like Jim Steranko, Barry Smith, and Neal Adams could not save the title from its fate. Five long years later the X-Men did return but that is story for another day.

Our Arc & Run for today is my favourite early X-Men run with many new characters and crossovers in the eight-issue run. It’s also a Jack Kirby/Stan Lee at their best with Kirby doing the covers and interior pencils, with help from Wally Wood, Alex Toth and Jay Gavin. Inking help a plenty from Chic Stone, Dick Ayers, Dan Adkins, Vince Colletta, Frank Giacoia and Joe Sinnott. Stan Lee is our wordsmith. Let’s get to it, we start in January 1965 and finish in January 1966. 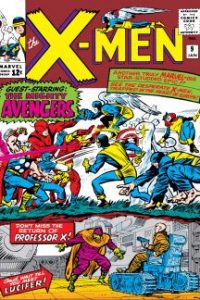 The obligatory first meeting story and it’s a good one. Professor X has his hands full with and old foe named Lucifer who was responsible for the loss of use of his legs. Lucifer, we find out is pretty crafty, having a powerful bomb linked to his heartbeat. If he goes – a whole bunch of you are going with me type scenario. The Professor has a plan but needs time to implement it. The Avengers arrive to help in the battle but the Prof needs them to stay out of it and he sends his young X-Men in to a delaying action against the Avengers. It is an interesting fray, more like a test of skill with no one really wanting to hurt the other. The battle ends with Professor X taking out Lucifer without killing him and he telepathically contacts Thor for a ceasefire. Both teams are relived at the end of the battle The Avengers come away impressed and the young X-Men weary.

The X-Men and Avengers would link up again in a cross-over battle in Avengers #53. Lucifer returns to the pages of the X-Men in issue #21. 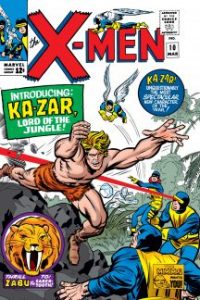 The X-Men need a vacation after their battle with the Avengers and decide to go to Antarctica to do some exploring. They manage to stumble into the unknown Savage Land home of T-Rex’s, Pterodactyl’s, and mastodon’s. It is also home to Ka-Zar and his pet sabretooth Zabu in their first appearance in Marvels Silver age of comics. The X-Men help Ka-Zar stop a sacrifice by the native swamp people to a hungry T-Rex and they part the hidden Savage Land as friends.

Ka-Zar would go on to guest-star with Daredevil, Spider-Man, The Hulk as well as returning to the pages of X-Men in issue #62. He later starred in Astonishing tales and his own series for a time in the early seventies. The Savage Land was another one of those wondrous and mysterious places like the Black Panther’s Wakanda, Inhumans Hidden dome city, and the Sub-Mariner’s Atlantis that made the world seem like a place full of un-explored adventure for young 9-12 year old kids’ like me back then. A magical time and place created mostly by the imagination of Jack Kirby. 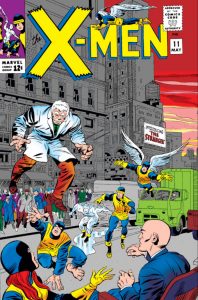 A new powerful being has been detected and Magneto and the brotherhood as well as the X-Men are on the hunt. Magneto gets their first, which it turns out is his triumph. Careful what you wish for. It turns out our new powerhouse is from a different galaxy. We come to know him as the Stranger. The X-Men have arrived and are battling the brotherhood when Magneto and the Stranger exchange a display of each others power. It quickly becomes apparent the Stranger is in a class of his own, and it turns out he is on a “field trip” of sorts and is studying genetic mutations in humans – and plans to take a couple of mutants back home to study. It turns out Magneto and the Toad are his two subjects, he wraps them up and in a blink of an eye they transported along with Stranger to parts unknown. It happens so quickly it’s hard to believe that Magneto was gone – seemingly for good. The abandoned Quicksilver and Scarlet Witch are quickly offered membership in the X-Men but they politely decline. They will try another path and it turns out to be with the new line-up of Avengers in Avengers #16.

The Stranger has made assorted appearances all across the Marvel Universe, usually in short one-shot issues. I never liked him much. He always looked like an angry grandfather, or a bad Santa in summer clothes to young collector me. 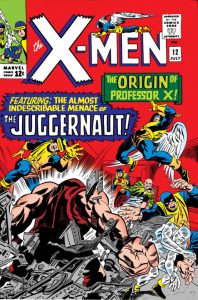 X-Men #13
September 1965
Where walks the Juggernaut

The X-Men are battling the powerful Juggernaut and trying to give Professor X time to find help in their battle. The X-Men are clearly out-matched in the brawn department in this fight. The Professor finds the Fantastic Four’s Human Torch and he joins the fray. The Professor hatches a plan and guide the team telepathically through the fight, culminating in a blinding fire ball from the Human Torch and the Angel swooping in to remove the Juggernaut’s helmet. A quick mental bolt from the Professor and the battle with now helpless Juggernaut is over. The Juggernaut would return to menace the X-Men in issue# 32-33 and this time the X-Men would require the help of Doctor Strange to defeat the Juggernaut. Along with repeat skirmishes with the X-Men & Doctor Strange, Spider-Man and The Hulk became foes of the Juggernaut as well. 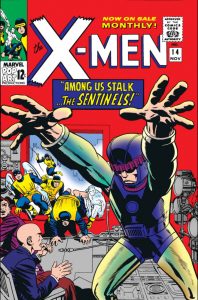 A three-part arc for the introduction of the dreaded Sentinels. Doctor Boliver Trask is a mutant-hater and publicly denounces them as more dangerous than any cold war threat. He has built a small army of Sentinel robots to deal with the mutant menace. The immediate problem for all concerned is that Doctor Trask’s creations are not listening to him and they pose a threat to humans and mutants alike. There are debates between Trask and Professor X, The X-Men get captured and break free, the origin of the Beast is told, we are introduced to the terrifying Master Mold, and finally Doctor Trask blows up his own creations and himself in the process in an effort to eliminate his disastrous creations. Long-term we know he failed in issue #16 as the Sentinels become a life-long threat to all mutants. There is more to like in this three issue arc but I’m starting to get over my self-imposed “word” limit on a post 😊. X-Men Masterworks #2 is a good place to read these stories if you don’t buy or own the comic.

In issue #17 Magneto returns, and Jack Kirby begins a slow exit from the book which is later taken over by Werner Roth. I always felt the X-Men’s slide to cancellation began here. The team didn’t change much in composition over the next fifty issues The Mimic (didn’t like him much), Banshee, Polaris, and Havok were about it. I think that hurt them too. I would be interested to hear readers thoughts as well.

The 47th Overstreet Price guide values for the books covered today are listed below. I have also added the 9.2* price from the 38th Overstreet guide of 10 years ago for comparison.

There is not a great deal of change here with X-Men #12 still leading the pack. I know I always used to think #13 & #16 were the best bargains and #9 & #14 were undervalued. I also thought #15 was overvalued. Of course, none of that has played out over the past ten years, so what do I know 😊!