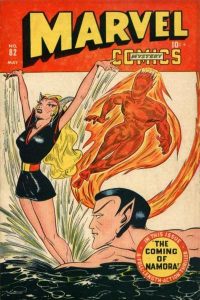 Much to my surprise I have never picked a Marvel Mystery as one of my Spotlight picks.

Marvel Mystery Comics #82 features the 1st appearance of Sub-Mariner’s cousin Namora. Namora  the daughter of an Atlantean father and Human mother, she even got her own Timely Comics title in 1948 though it only lasted 3 issues.

Sub-Mariner #33 (January 1971) re-introduced Namora to the Bronze Age and she’s a founding member of the Agents of Atlas in current Marvel continuity.

Namora is a great female character introduction coming out of the years when superhero comics were dying a slow death. What’s important is that she is a Timely thus Marvel character and she has a close affiliation to Subby. With Sub-Mariner being such a highly speculated character these days I think snagging this Golden Age gem will give you something nice and heavy to put beside that Fantastic Four #4.

I will admit that this is a tough book to track down as there has not been a recorded sale on the GPA over the past two and a half years, a CGC 9.0 sold for about Guide back in September of 2015. Before that sales were much more common with 7 sales being recorded in the 3 years prior. But I’ve picked scarcer books before so no complaining! And these books have a knack for popping out when you least expect them so be vigilant.

I realize that the next sale at any grade will be high but my argument is that it may not be high enough, I think anything close to double Guide would be a steal, and triple Guide might be where we are at.