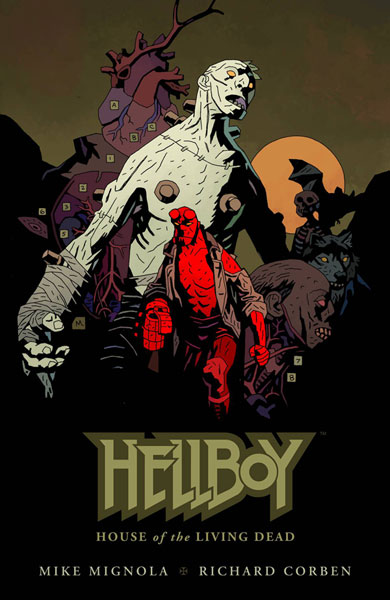 Continuing with my best of 2011, this week we look at my favorite one shot/graphic novel of the year, Hellboy: House Of The Living Dead. Please note, for those of you who may not be fully caught up on Hellboy, there are a few old spoilers located below.

I honestly think a lot of comic book companies could use this as a something to look to. I love graphic novels and one shots, always have, but they seem to be a dying breed at least in terms of mainstream comics. There’s no reason why that should be though, the key is to do what House Of The Living Dead did. 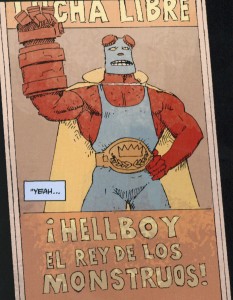 Like a number of the Hellboy one shots, House Of The Living Dead tries to do something a little different with the character who currently is dead. In this one, we go to Hellboy’s “missing years” where he is a luchador and spends a lot of his time drunk until he is forced to fight a Frankenstein style monster in a lucha ring.

Much like my point about last week’s pick, the story itself is rather simple in terms of Hellboy but it’s how it’s executed that makes it work. Mike Mignola mentions in his introduction that the book was inspired in part by the idea of “El Santo and The Blue Demon vs Dracula”, even though he hadn’t seen the film and he succeeds with a little help from Richard Corben.

As I’ve stated numerous times before, I love the art of Richard Corben. Currently in his 70’s, Corben seems to get better every year and beyond his own work, the character he seems to excel with is Hellboy. House Of The Living Dead is not his first foray into the Hellboy universe but it’s definitely his best so far. 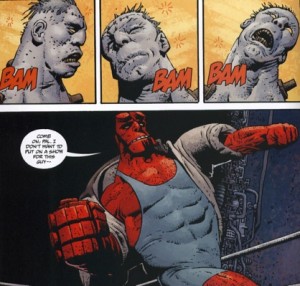 It’s obvious that Mignola tailored the script to Corben’s strengths but it’s the synergy between script and art that I love. Other then Corben’s style, you’d think that Mignola did this himself. There’s just a fluidity to the work that feels like it just spilled from Mignola’s mind on to the page.

Despite the creator’s lack of knowledge of the lucha film, it sure has the feel of one. I’ve been a fan of these things for a while (despite being hard to find here) and there’s a certain balance between the utter absurdness of the concept and a respect for the characters that’s found in them that’s hard to pull off and Hellboy: House Of The Living Dead has that overall feeling to it.

A great fun read, great art and you don’t need to know a lot about Hellboy going in to get into it.

Congratulations Mike Mignola and Richard Corben. You’ve won the prestigious prize of booze (if you ever come to Toronto) for creating what I feel is the best one shot of the year.

Next week we wrap things up with my favorite comic series of the 2011.