As many of you might recall, a few weeks ago I wrote a column about my toy buying habits.  Writing the column kind of re-awakened my love of toys and my interest in collections.

For someone who buys comics, this can be a hazardous thought.  Kind of like the coke addict who begins thinking speed balls are a good idea.

But I have friends that manage their addictions pretty well. With this in mind I joined fellow CBD writer Ed Campbell, I Was A Hero colorist Ryan Parent (referred to as Ryan P and our photographer for the day) and driver/collector extraordinaire Ryan  (to make things easier, he will be referred to as Tall Ryan because he’s tall. It may not be original but it’s accurate) on their trip to Mississauga for the 80’s Toy Show (which is apparently part of TFCON).

Going to this show, I had very little in the way of expectations. I knew that it was mainly going to be a dealer’s room.  I also knew that I had little in the way of cash going in (a buddy had his bachelor party the night before. Sometimes booze, boobs and bros come before toys) but in a way it gave me an interesting idea to play with. I set a challenge/rules.

I was not allowed to go beyond a $20 limit (not including entry fee).

How much cool stuff could I get for $20?

The first thing we were greeted by at the hotel was a full-sized replica of the Keaton era Batmobile.  Whoever it was who made this bad boy did a great job. Everyone one of considered ways of stealing it and getting away with it. 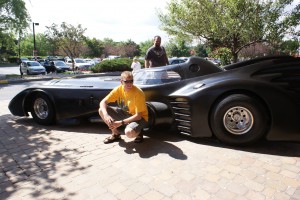 We hit the dealer’s room floor running.  While my buying style is pretty much scatter shot, the others guys seem to have a little bit a game plan.  Ed is searching for A-Team (from last year’s film version) that never appeared here in Canada. He’s already got the van (which is pretty sweet I must say).  He’s also looking for deals on GI Joe stuff he may not have. Ryan P is looking for stuff that he thinks is cool (Transformers being his main Target). Tall Ryan is looking for a mixture of genres but focusing on GI Joe, Star Wars and what he thinks is awesome.

I’m amazed by all the awesome toys. 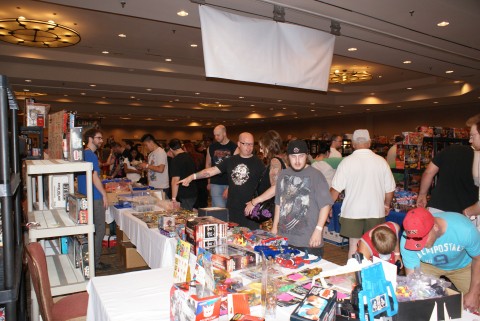 Pretty much every toy I wanted as a kid (aside from this line of Road Warrior style car and driver toys that got recalled due to lead paint) could be found in this room. Not necessarily in my budget, but they were there. From Jetfire (the Transformer that is actually a repainted Robotech toy) to the latest Marvel Galactus, even if I wasn’t buying there was a ton to look at and admire.

Looking around, the one thing I found rather interesting was the lack of people I recognized from other cons.  If you go to conventions of a certain type long enough, you tend to recognize certain faces you see year after year after year. Beyond a few dealers, the only person I recognized beyond my crew was Naked Dave (recognizable due to the fact he spends a majority of conventions pretty naked).

I would have thought the crossover would have been greater. Many comic, sci and horror fans do love toys but yet a lot of people I would expect to see at this show weren’t there. Do regular comic fans not know about these shows?

After 30 minutes or so of looking, I cam across a wall display where they were selling toys for 5 bucks a piece. Here I had found one of my purchases. From The New Frontier line DC put out I found a Darwyn Cooke style Batman. 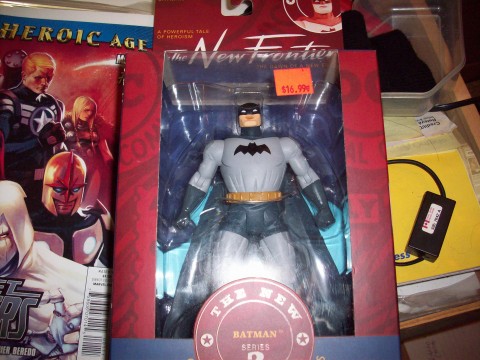 The figure itself turned out to be a lot cooler then I first thought. Nice vinyl/rubber cape, good solid figure, my one and only complaint is the stand that it comes with kind of sucks.

I later went back to the same vendor to pick up something.

The others seemed to fair well.  I’m not sure what everyone got in total but I do know Tall Ryan’s trunk area was pretty filled by the time we were done.

This may lead to another hobby for me.

As to what the second thing I picked up? I can’t currently say. As I’ve mentioned on a few occasions, the wonderful woman who puts up with me, is a bit of a nerd as well. Being the awesome boyfriend that I am, I picked her up a small something.

The best part of which is the fact I get to tease her about something I got her but she has no idea what it is.

Here’s a hint. It fits in this bag. 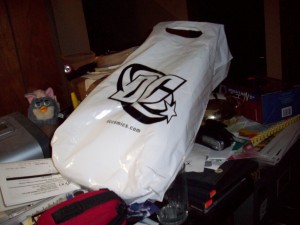 Next week I discuss with a whole whack of people who the best superhero ever is.