So I took a look at my columns from the past little while and decided it was time to do a little bit of a more personal edition. Then fellow columnist Scott VanderPloeg posted his article on sketches. Inspiration…or down right idea snatching occurred and I felt I’d join in and share some of my favorite sketches and the stories behind them. Note, I don’t have a scanner so all of the photos are taken with a handy Kodak digital camera. Hopefully they aren’t too horrible. 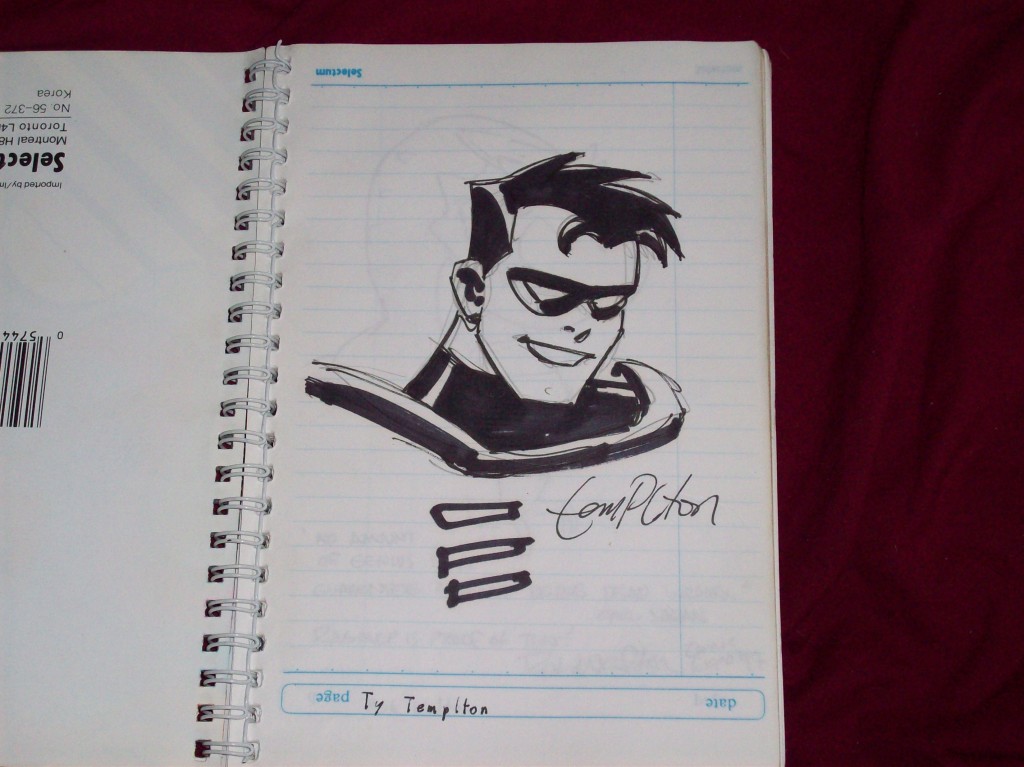 My first sketch book was very last minute. I ended up going to a very small mini-con right after a day of high school (I think I was in grade 10) along with my good friend David. It was my first convention of any sort and all I had on me was this small spiral bound note pad. Now while it didn’t leave much room for the art I did find that getting sketches in it was a pretty easy task. Most artists don’t seem to mind or charge for sketches if they are of this size for some reason. The first sketch I eve got was from Ty Templeton, who was drawing Batman The Animated Series comic. I have since upgraded to an actual art pad but I still keep the little one for various cons. 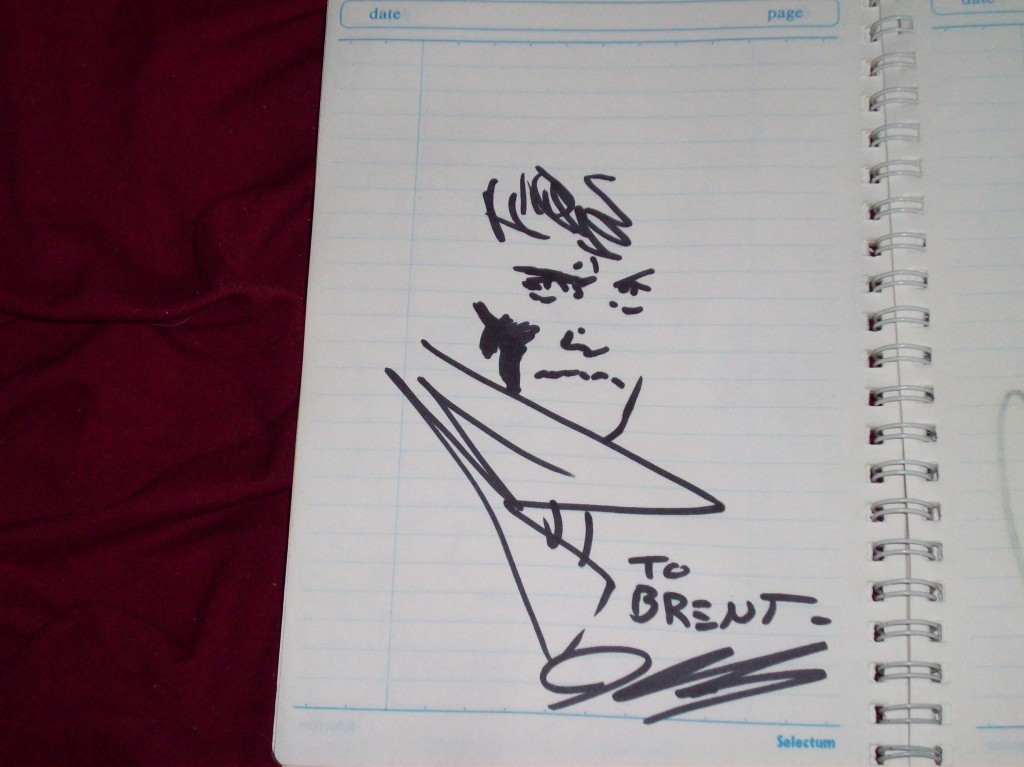 Just a quick sketch of Winter for my little sketch book but even as a completely heterosexual man, have to admit, Cassaday is probably the best looking guy working in comics.

As I’ve mentioned a lot, I love the original Teenage Mutant Ninja Turtles comics. When I figured out how Ebay worked, my second purchase was a copy of the then (and now) out of print first trade paperback. My mission afterwards was to get both Eastman and Laird to sign it… and sketch if possible. 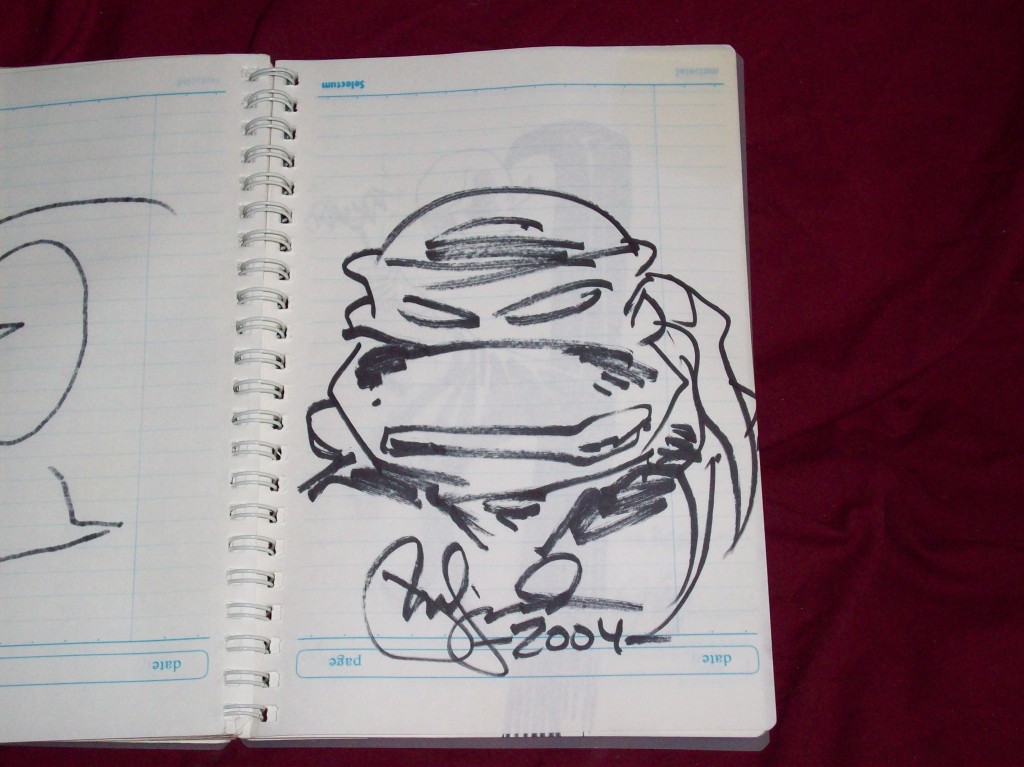 This head sketch comes from Peter laird at and was done at a Fan Expo. Can’t remember the year but I do remember the circumstances which make it kind of interesting. It’s one of the very few paid sketches in my collection (a grand total of two dollars was spent on it) Peter had just taken out his pen to do the sketch when the power in the convention hall went out. Not pitch black but pretty dark. “I’ll give this a shot but if it sucks, I’ll draw you another one for free.” And to my astonishment, it came out pretty much perfect. Astonishment until the guy beside me pointed out that the Turtles were nearly 15 years old at that point which in my mind registered as “No wonder the sketch came out fine. He’s been drawing this damn Turtle head for nearly 20 years.” But a cool sketch none the less.

Now the next sketch comes from the pen of Kevin Eastman. 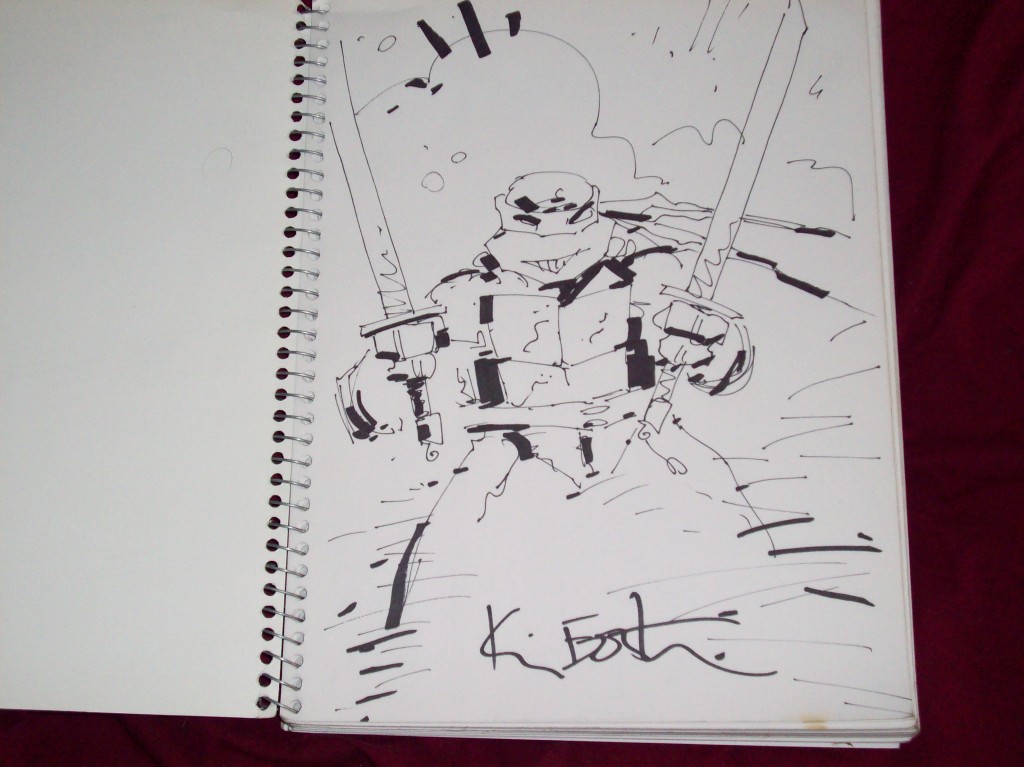 Having gotten one creator, I knew I had to try for Eastman at the Fan Expo where he had brought his Heavy Metal magazine booth. Trouble was, I had heard through the grapevine that Eastman had grown to hate the Turtles. It was fact that he and Laird weren’t exactly the best of friends and that Kevin had also sold off his share of the Turtles to Peter a few years before.

I stepped up to his booth very quietly and nervously (if you know me, that’s a little odd) and he greeted me with a very hearty hello and shook my hand as I quietly slipped my Turtles trade in front of him… and I managed to mutter:

“The other guy got to it before you did” and I smiled meekly hoping not to have my head torn off by an anti Turtle tirade by a creator whose work I really loved.

To which I was treated a smile.

“Man, I really wish Peter would reprint these again.”

Turned out (as is more often then not the case in things like these), Kevin still had a great fondness for the Turtles as they pretty much had made his dreams come true. The Turtles were what gave him the opportunity to do the other comic projects he wanted to do along with the capital to become a full time publisher. He explained it with the ice cream theory; ice cream is great but you wouldn’t want to eat it every day for the rest of your life. He then spied my sketch book and asked “Who’s your favorite Turtle?” and he did this full sized awesome Leonardo sketch that is one of my favorites. And I have the trade signed with by men on the cover. 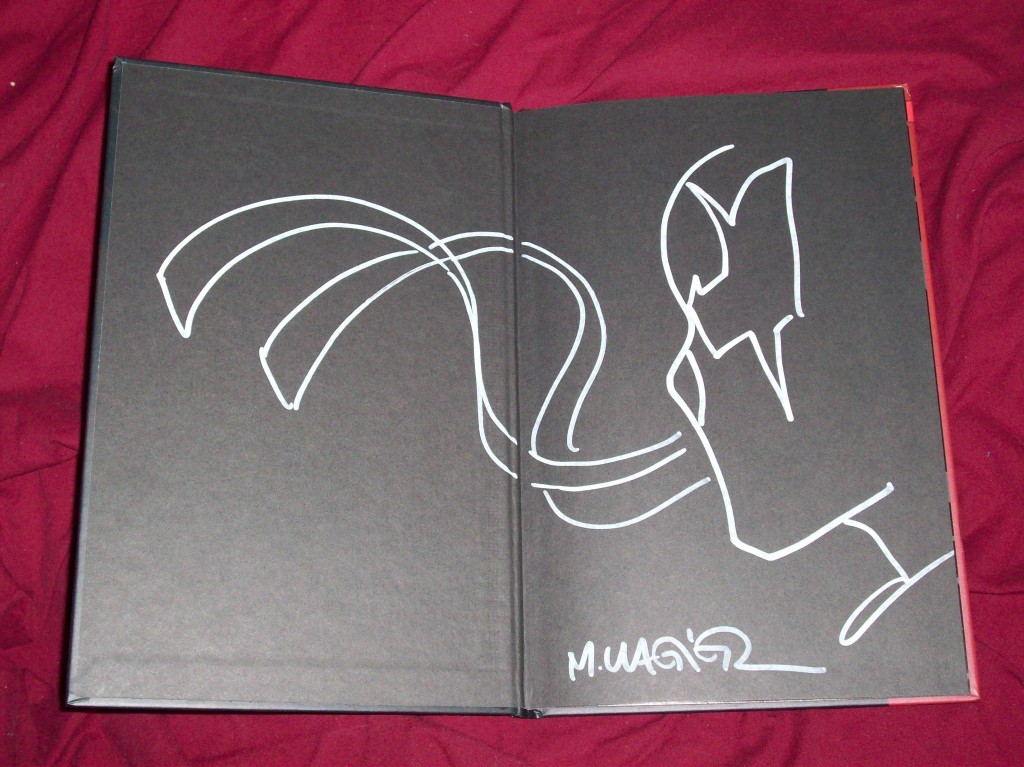 My favorite piece in my sketch collection. I have very little memory of the convention I got it at other then I’m almost certain it was a Paradise Toronto Comic Con. The fact that it was nearly empty bolsters that thought in my mind. Matt Wagner was one of the guests of honor and there was a total of three people in front of me. The hardcover version of Devil by the Deed had come out (the black, white and red version from Dark Horse) and Matt did a simple head sketch in white on the inside cover that I absolutely love. He also did a companion piece for me of Grendel-Prime. 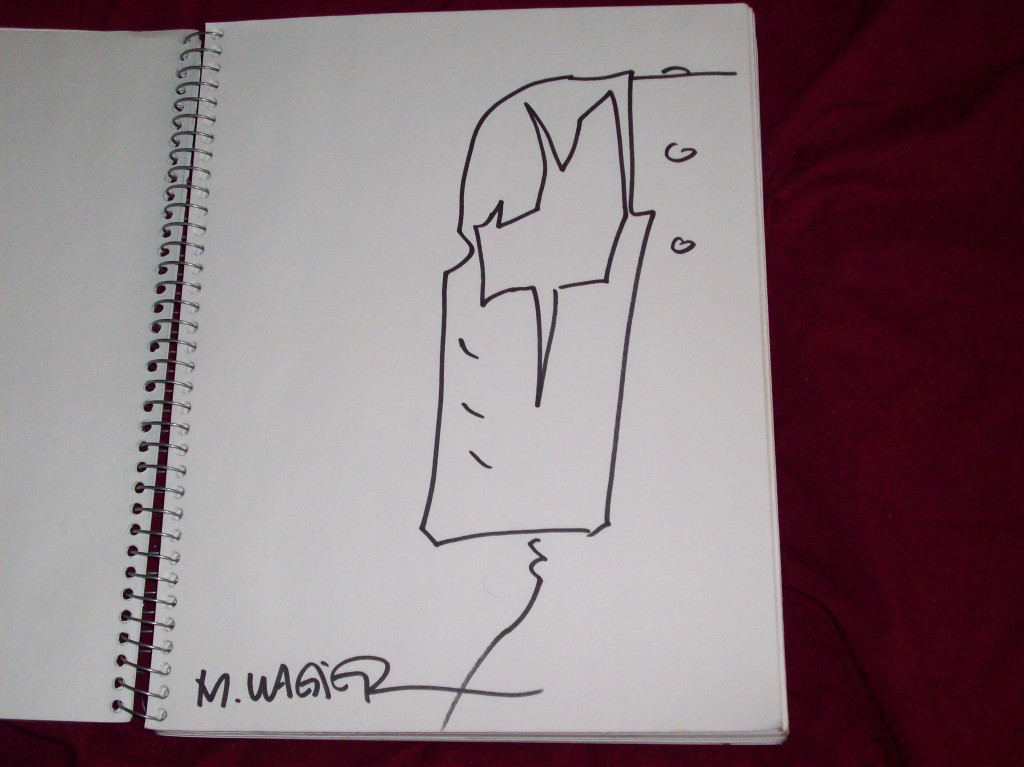 I think with sketches, the key is to go with artists whose work you love. If you’re going to stand in line for a few hours or pay your hard earned cash for a sketch, make sure it’s by an artist that you’d love to show off their work.

That’s it for me this week. I’m as of yet uncertain if I will be attending Wizard World Toronto, it sort of depends on a few factors but there’s a whole new way to follow me. My Facebook fan page! Yes get updates on all of my various writing projects by simply clicking the like button at www.facebook.com/bcchittenden . Next week, a look at the entire first season of The Walking Dead on dvd.