It’s the beginning of a new year. A year of hope, a year of promise and hopefully a year of kick ass comics.

To start this year off I’m going to talk about…well a bunch of things. Come on! It was the holidays! Nothing really big happened….or did it?

The Marvel stock holders voted yes. I would have. It just has to clear some legal channels and then the real interesting part begins…or not, I predict except for the movies, we may never notice a difference.

Looks like. Apparently Sam Raimi isn’t happy with the script and wants to hammer it out until it’s ready. The first two times he got things hammered out, the third he just let the script go with a pass. Which movies out of the three did you like? My point exactly.

It took me a while but I finally got a copy of the trade and I must say I am rather impressed. The story is about Tony Chu. Chu lives in a world where chicken has been outlawed due to Bird Flu and Chu can get psychic impressions from every food he eats with the exception of canned beets. He’s been hired by the special crimes division of the FDA due to his unique abilities.

It’s a great read although the first trade is very much just a taste of the series. The writing is sharp and the art and colors fit the book perfectly. To really go any more in depth would be to give away too much and rob you of some of the enjoyment. I do really recommend it though.

DC tells Marvel, Millar and McNiven to cut that out!

DC apparently made some legal rumblings over the solicited cover for the upcoming Nemesis project. Something about too Joker like. Marvel has apparently complied probably due to their legal department going “You know you might have gotten away with it had that Millar guy not made all of those Joker comparisons in interviews.”

I’ve decided I might pick up this series in trade. Truth be told much like every other writer in the world, I have a Doctor Strange story in my back pocket but I kind of like where the magic part of the Marvel Universe has been going lately.

Sure it Ferngully on Steroids or Dance with Wolves in Space with Colonial Marines but it’s kind of like cinema comfort food. It’s a familiar story but it was done so well that you don’t care. My question is, where’s the comic book tie in? Now I’m not usually one to promote these sort of things but given the visual aspect of the film and just the entire nature of it, there is a wealth of material in there to be mined that we will never see on film.

Oh and for those of you who were uncomfortable with the Na’vi female characters, Jim Cameron’s motto for the effects people was she must be #@&#able. So take solace in the fact that you and Jim Cameron have similar tastes in women.

I’m kind of surprised I haven’t seen anyone really mention this but I caught the revamp/reboot/rewhatever of The Phantom this week on the Movie Network. I rather enjoyed what the Knauf’s cooked up and it also reminds me how good their last show was. And their work on Iron Man. Although the new suit looks a little… well you tell me, maybe I’m imagining things.

Flashback a few years ago…

“The new Fantastic Four movie is going to be awesome!”

“The Fantastic Four are in it.”

I have never understood the attraction to the FF. They do have a following however because every time a writer sets foot in the Marvel door, it seems to be a book they want to work on. JMS, Mark Millar, John Byrne are creators I respect but never managed to drag me into the Fantastic Four for longer then an issue or two.

The Thing is the only one that really ever interested me. The Fantastic Four are (for my tastes) a group of characters that should have been used as guest stars. The show up and help the Avengers or Spider-man for four issues and then disappear. The same for the Silver Surfer. He’s a guest character and should never be used on a full time basis because no matter what you put him up against and no mater what the story is HE IS STILL AN ALIEN ON A FLYING SURF BOARD. And it’s not even a design thing you can change.

That being said, Hickman is doing enough good work on this book that…I might be converted.

And that teaser image of Galactus dead that Marvel released earlier in the week? 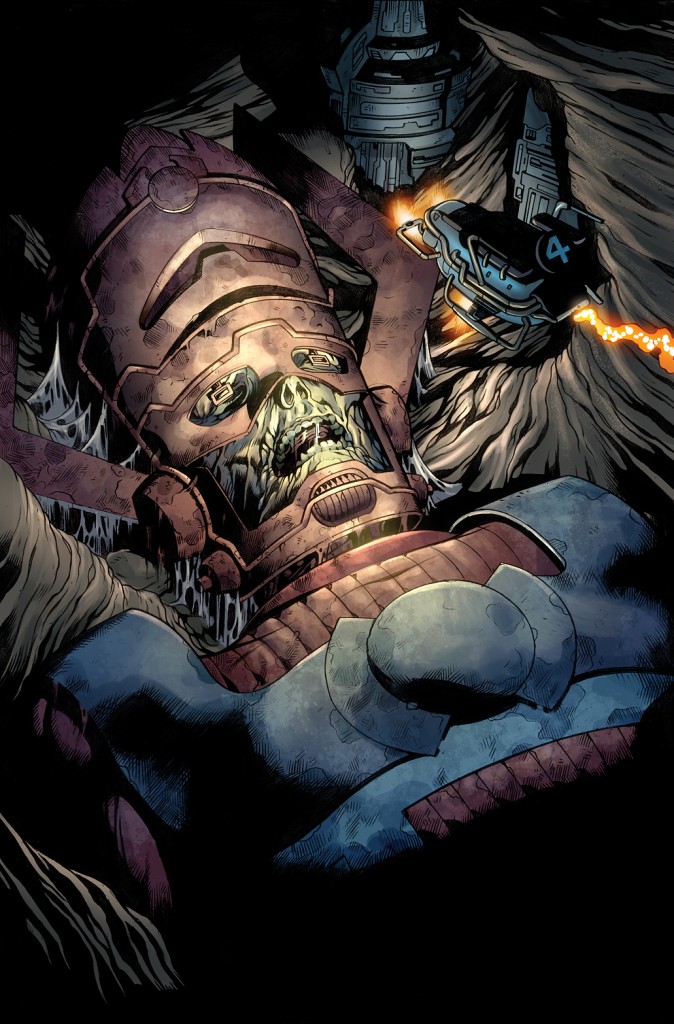 I honestly want to know what happens!

And yes I realize it may be hypocritical to make fun of an alien with a surf board but yet show interest in a giant purple suited planet eating man.

So coming up in the next little while

Looking at Booster Gold (I’m using this review to both satisfy a reader and meet Blair Butler).

A Look Back at Crossovers that started..er.. Crossovers.

A report from Wizard World Toronto.

And for those of you who are interested up coming episodes of my podcast include our one year anniversary show, our year end awards show and an interview with Juliet Landau (Drusilla from Buffy).

And for those of you who really care, I’m on twitter under BCNerdhole.

Brent Chittenden is a Canadian based freelance writer. He writes a lot these days.