Pete DeCourcy would have made a pretty good drug dealer.

A year or two ago, it was Christmas time, I was in The Blue Beetle and I was looking for something new to try out.

“Have you read Criminal yet?”

Pete looked at me like one looks at a sad child.

“Dude… here.” He handed me the first trade, “Merry Christmas.”

Now while it was a kind Christmas gift on Pete’s part and in reality I believe he had no intention of doing this on purpose, but like many a good drug dealer, the first taste is free.

The rest you pay for.

I fell in love with Criminal and bought the rest of the series and the trades are automatically filed in by pull box when they come out.

Which brings us to two weeks ago.

I walk into the store and Pete already has a stack of trades at the desk waiting for me.

“Here ya go. These are mine. Read them. Bring them back when you are done.”

The trades were for the DC Vertigo series, Scalped. 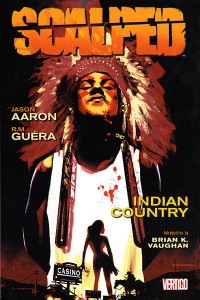 Now I own the first trade previous to this but had a few issues with it (which I will detail later) and never bothered to follow-up with the subsequent trades.

Man did I miss out.

Scalped is the story of Dashiell Bad Horse, a man who can kick ass and uses nunchucks to get his point across. He has come back to the rez of his childhood and ends up working for local crime boss and tribal council leader Lincoln Red Crow. Red Crow is in the midst of opening up a casino on the rez and Dash has been hired on as the muscle.

Did I mention Dash’s mom, Gina, and Red Crow used to be part of the same protest group for Native rights?

Or the fact that Dash is actually an undercover FBI agent whose boss has a vendetta against both Red Crow and Gina?

Don’t worry about the spoiler’s, this is all in the first issue which if I’m not mistaken, can still be downloaded for free from DC.

Where the series runs the best is the added layers or story and plot that is going on.

But be warned, Scalped is definitely not a cheerful comic. There are moments of humor and laughter but by the end of the High Lonesome and The Gnawing story arcs, you might wonder how much deeper will the desperation of the characters sink.

And while elements of the story are obviously a bit on the fictional side, if you know anything about how life is for many Native’s in our country alone, you know a good chunk of it, sadly, isn’t that far-fetched.

Written by Jason Aaron with art mainly by R.M. Guera (there are some one shot stories here and there throughout the series), Scalped is incredibly well written and while the art took a little while for me to get used to, it fits perfectly the tone of the book.

Characters like Dash and Red Crow aren’t caricatures of Natives on a rez. They feel real. Red Crow for instance is a man who has most assuredly done a lot of horrible things over the years and knows that he will some day have to answer for those things but there is a bit of nobility to the character that despite the fact he’s murdered and destroyed lives and despite the fact that he has benefited from these acts, his greater goal is to help his people. 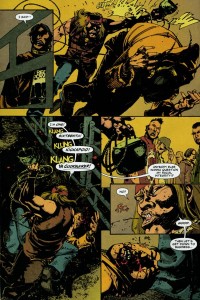 Dash too is multi faceted. We know he was forced to leave the rez at 13 by his mom sending him away. We know he was a solider in Kosovo and now works for the FBI. But we don’t know exactly why he’s undercover other than it involves his boss finding him in jail in Alabama.

Now what’s my one complaint.

R.M. Guera’s style is very heavy on the blacks and on the inks. It fits perfectly for this type of story. Unfortunately the paper that the current run of Scalped trades is printed on is not particularly good and makes the art somewhat murky and at times hard to follow. A book this good deserves an up grade to a better printing. Maybe we will see that if a hard cover is ever announced.

If you’re a fan of crime comics or shows like The Wire or The Sopranos, Scalped is well worth your time to invest in. My only problem with it now is do I wait for better looking printings, do I just buy the next trade or do I buy the whole thing right now?

Comics… they can be as bad as crack I tell you.

*I will be around TCAF Saturday afternoon and will be checking out a number of the artists and panels. If you see me, please feel free to say hi.