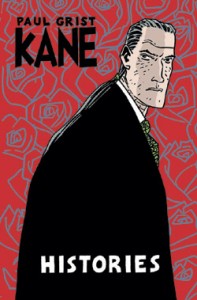 So funny story, I walk into Comic Book Daily HQ having learned from my last experience, carrying a Captain America shield in case of omnibus attack. Peeking over as soon as I open the door, I notice the room has been painted entirely white and the walls are stacked with old tv’s obviously picked up from the side of the road.

Sitting in the middle of the room is Pete DeCourcy in a white suit.

“Um…hi Pete…” I say keeping my head within ducking range of the shield.

“Shhh.” Pete replies and he then points to a stack of trades.

I get the hint, quickly grab the stack of trades and run out before something goes really weird.

The stack of trades?

Probably best known for his series Jack Staff, I first encountered Paul’s work on a spin off series of Matt Wagner’s Grendel called Grendel Tales: The Devil in Our Midst. His art was a little different then what I had been used to on the various Grendel titles.  Very sparse but yet it worked really well.

Tucked away at the back in one of those issues was an advertisement for Grist’s cop comic Kane.

To sum it up Kane is pretty much the best aspects of every cop drama I’ve ever liked.  It’s not a technical procedural police comic but more in the vein of Hillstreet Blues. Originally self published and then moving to Image (who has reprinted the entire series in trades),  this is a series that on the outside seems very simple but gets pretty complex later on.

The series starts by following Kane, a detective the 39th precinct of New Eden’s police force. Something has gone rather bad for Kane and a former partner (which is slowly revealed in the series) and the rest of his precinct doesn’t seem to like him that much. In fact, one even goes so far to sabotaging Kane’s firearm.

Kane’s also being saddled with a new partner.

Remember what I said a couple of column’s back about Writer/Artist’s having a direct and clean path in their work? Kane is a prime example of it. It has a very clean look and the story fits with the art perfectly every issue.  Even when Grist experiment in the book (an all silent issue for example) it still seems to match perfectly with the story.

The writing is also very well done and a good chunk of the stories could be featured on a variety of police tv shows with ease. Much like Walking Dead, there is a lot of build up to payoff’s but Grist balances this with having interesting side stories that contribute to the flow of the book. I love the fact that it does things tv shows used to do.  For instance, part of the first two trades involve a guy in a rabbit costume.  I always fondly remember shows where they would once a season (usually Halloween or Christmas) do a wacky episode. The best were the ones that walk that fine line between wacky and stupid. The key was to present a ridiculous situation but never forget what the show was about. Paul Grist apparently took these lessons to heart and manages to pull off the occasional wacky story while maintaining the integrity of the series.

I could go more in depth but I don’t want to ruin the story for those of you who might want to pick it up.

If you are a fan of Hillstreet Blues or The Shield, you’ll enjoy Kane.  It’s currently on hiatus so it’s easy to catch up with in trades before he gets into graphic novels he’s planning for the character. 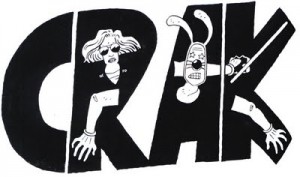 Brent Chittenden is a Canadian based freelance writer and one of the Two Assholes Talking About Nerd Stuff that can be found at www.nerdholes.blogspot.com.  When he’s not doing that he roams the country side looking for leprechauns.