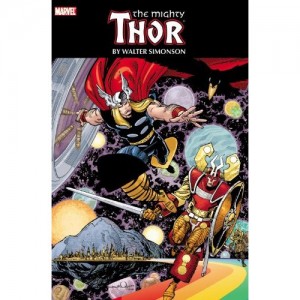 I don’t tend to buy a lot of the Omnibus/Absolute format hardcovers.

I tend to believe that comics should be able to be read without causing spine damage to the reader.

That being said, the minute Pete DeCourcy opened up his copy of the Walter Simonson Thor Omnibus, I knew I had to have a copy.

Simonson’s run on Thor is up there with Miller’s Daredevil run for me. It’s a truly unique take on the super hero version of Thor and in many ways Simonson went for absolute broke with his run that turned into pure story telling gold.

For instance, let me point out something that I don’t think has been really articulated this way.

One of the major points of the run is the introduction of Beta Ray Bill. Beta Ray Bill is an alien who is vaguely a humanoid horse hybrid who has the good enough warrior soul to lift Thor’s hammer and get Thor’s powers and costume. 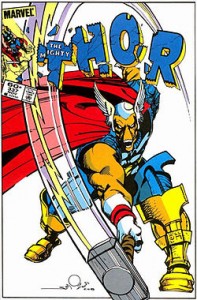 That’s right, when you break it down, Beta Ray Bill is a horse alien that dresses like Thor.

And despite it’s apparent ridiculousness, Beta Ray Bill’s entry is not only incredibly well written and a character design that really stands out but honestly, it’s just plain awesome.

Now as regular readers are probably aware, I delve back into the comics from yesteryear from time to time, with mixed results. Sometimes they stand up, some times it’s a pretty big pile of poop.

This time, it’s definitely the former.

Simonson’s Thor is both a product of its time and manages to surpass it. In terms of writing, there tends to be a LOT of dialogue compared to those of today, yet in the setting of Thor, not only does it not seem dated, it would feel wrong without it.

The storytelling itself is pretty epic. Battles are fought but there is a gravity to them. Lives are in danger as opposed to seeming like they are in danger. Actions have consequences. If I were to compare it to something, I’d say Lord of the Rings is probably the best comparison thematically.

Now here’s where purists might have a problem.  For this Omnibus edition, the comics were digitally re-coloured.  This means they look a bit different then the originally did. For some, this means this edition is drastically altered from the original and therefore not as good.

While I can see that logic I can also say that those people are wrong… and possibly insane.

I have always loved Walter’s art, especially on Thor, but the re-colouring on Thor has taken what once looked great and turned it into something that looks amazing or possibly beyond that. It makes every pencil line seem more like what they were intended.

To use a film analogy, this isn’t Star Wars Special Edition, this is Blade Runner Final Cut.

There is only one bad thing about this Thor book.

Okay there are two things.

It’s heavy. I mean really heavy.  I’ve rigged up a system in my bed of a pillow pedestal in order to read it comfortably.

The second problem is one that is completely my fault.

I have no idea what Walter Simonson is up to.

Someone asked me, what Walter has written since this run on Thor and I’ll be honest, I had drawn a blank.

When I got home and I began reading Thor again, I began to remember how good a storyteller Simonson is. He did a great run as artist on X-Factor (written by his wife, Louise) and a pretty solid run on Orion (Pete pointed this one out to me; it had an incredibly Darkseid vs Orion fight in it which begs the question, why isn’t this in trades? (Editor’s note: Orion, Gates Of Apokolips.  Also check out his run on Fantastic Four.)). But what is he working on now? As far as I can tell, his last major work was on a World of Warcraft series from Wildstorm (which after re-reading Thor, I want to check out).

So I’m going to throw this idea out there. Dark Horse. You have the rights to a large amount of Robert Howard properties.  Can we please have an issue with art by Walter Simonson?

Back to the main point.  While the weight and size of the omnibus may frighten of some, if you are a fan of fantasy and or comics, the Walter Simonson Thor Omnibus is highly recommended reading.

Next week, I have two of my discs fused.