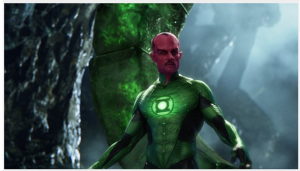 As one Green Lantern fan said, “It’s the best we’re gonna get, which is not necessarily a good thing.”

Well, better late to the party than never showing up, I finally saw Green Lantern. It was all right. Granted, I didn’t go in there expecting much so I’m not too upset.It’s a solidly mediocre offering from DC (who, let’s face it, save for the last two Batman films hasn’t had the best luck with comic book movie adaptations), which is incredibly tragic given all that the film had going for it.

My biggest critique of the film is that they really should have just stopped abusing the CGI. Near the end of the movie with the Big Bad and Hal Jordan in space, it got to the point where I really lost my patience. To a certain extent, you do need those effects as it’s a cosmic tale with a lot of space travel and aliens. However, there comes a point where there’s nothing but flash and you cannot sustain a film on that (despite what the success of Avatar would have you believe). Especially for a comic book adaptation; drawing off of such a rich and established continuity, there HAS to be more than a bunch of kick ass CGI renderings.

I have to give some props to Ryan Reynolds, you could tell that he (and his abs) were really pulling out his A-Game. He was enough of a cocky douchebag to buy that he’s Hal Jordan but there was enough Ryan Reynolds that you actually liked the character.

The costume was just absurd, even if it was true to the comic. It just looked wrong. Maybe it would have been better had they hadn’t used CGI to bring it to life. (Again, I get what they were trying to do. But, again, they failed.)

Mark Strong was awesome as always (you couldn’t have asked for a better Sinestro). The Kurgan (well, his voice) was perfectly cast; as was Dr. Hector Hammond (Peter Sarsgaard). 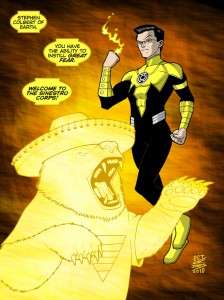 With so many things going for it, Green Lantern should have been awesome but, in the end, it was just meh. And that’s what most disappointed me.

However, if you look at this film in the context of, say, a trilogy of Green Lantern films, it’s a good starting point. It’s no Thor or Iron Man but it’s better than the first attempt at Hulk (the Eric Bana one) or Thomas Jane’s disastrous Punisher. It’s mediocre and probably a film that, once it’s on DVD, will be included in that cache of movies that I have on in the background as I do anything but watch the movie.

I hope they make Green Lantern 2: Electric Boogaloo. As I mentioned in my previous article, the first film in a comic book franchise sets the stage for subsequent films and there’s a lot of exposition and acclimatizing viewers to the narrative world (especially when you’re talking about comic book movies). As a result, they’re generally solid films but later ones tend to (rightly) outshine them. Green Lantern accomplished this feat, not as spectacularly as others have done before it, but it’s a solid origin story. I’d like to see a sequel where Sinestro and Hal team-up and Sinestro starts to turn away from the Green Lanterns. (Ideally, the third film would then be the Sinestro Corps Wars.)

And, yes, I do think that, should this third film come to fruition, that Stephen Colbert be made Sinestro’s number two (art credit goes to ~drawerofdrawings over at DeviantArt). Yes, it might be slightly cartoonish, but you cannot deny the sheer epic awesomeness of the mere thought.

As always, Gail Simone has a most awesome suggestion as to how you could make Green Lantern exponentially better: relaunch it! 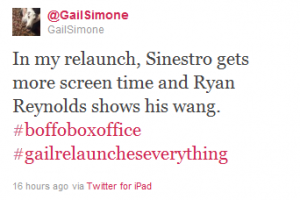 Shelley Smarz is a comic book scholar and business woman. She’s a bit of a sad panda as there was no real Sinestro/Hal Ho!Yay! when there should have been. However, during the scene where Parallax chasing after Hal in space, her tentacle porn senses started tingling…in her pants! Please excuse her wackiness this afternoon, she had too much caffeine this morning so she’s a little more unhinged than normal. (Okay, maybe more than just a little.) Also, in that aforementioned scene in space, the image of the giant, disembodied cloud flying through space reminds her of something…she just can’t remember what.