I’ve been on a bit of a nostalgia kick recently as last week’s “it came from the long box” column is a sure sign of. Being a bit of a dreary day, I decided to take a look at the film version of The Crow (which has recently been released on blu ray… which I don’t have… I’ve got the two disc US dvd version). 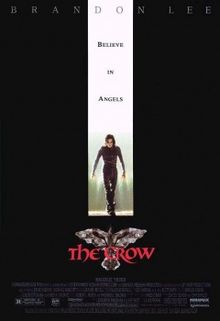 First published in 1989 by Caliber Comics, The Crow comic wouldn’t have been the first choice for many a producer to make a film out of. It was dark. The art wasn’t exactly mainstream. Created by James O’Barr as a way of dealing with his own pain (his fiancé had been killed by a drunk driver), even by today’s diverse comic market standards, The Crow is fairly unique in many aspects.

And then somehow it became a film.

For those of you who haven’t seen it…well first off you’re probably under thirty… the plot is the following. Eric Draven and his girlfriend are about to get married when he is murdered and she’s raped and murdered by a gang of thugs working for a big bad dude named Top Dollar. One year later, Eric returns from the grave, pretty much invincible and he’s out to exact justice.

The film as an adaption is a little bit of a weird duck. While the basic plot is the same, there is a ton of changes from the comic it is based on. Characters are a bit different as are set pieces and a good chunk of the film is totally different. Yet, the film version completely gets the atmosphere and feeling right of the comic. From the filtered colors that almost appear black and white, to the use of darker music in the soundtrack (don’t get me started on how awesome the soundtrack is! I think every guy in my group of friends in highs school had a copy of it on cd), the film fired on a cylinders in this department.

Most of that credit goes to filmmaker Alex Proyas. Proyas is a director that I love and kind of want to punch in the face at the same time. After The Crow he went to do an amazing visual feast of a film called Dark City and then I, Robot… and then Knowing… both of which almost made me want to cry due to waste of talent but I do suppose a director has to eat.  The Crow had a budget of approximately 15 million dollars and was originally slated for direct to video. I’m not sure how Proyas managed it but The Crow look a lot more expensive then it actually was.

Casting was really well done on The Crow. It’s one of the few films I can think of where I don’t think I’d change an actor. Standout is Brandon Lee. 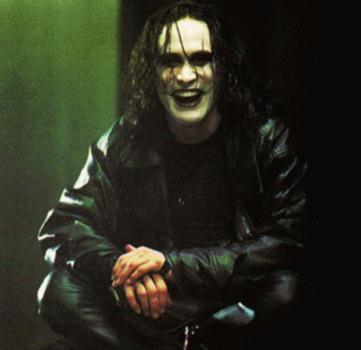 Brandon was tragically killed in an on set accident and at the time of The Crow’s release, many people and critics hailed the performance as amazing, etc but now 17 years later, it’s nice to see it with the performance without a lot of that media baggage.  While not a Best Actor performance (he would have had to beat out Tom Hanks as Forest Gump, John Travolta in Pulp Fiction, Morgan Freeman in Shawshank Redemption and Nigel Hawthorne in The Madness of King George) there is definitely a weight to it that a lot of action actors simply do not carry. It’s interesting to ponder what might have been for Brandon had he lived.

The Crow was a stand out comic book film in an era that lacked comic book films at all and despite its success, it was a while before we got more comic films in a similar mode (Blade would be the next one that comes to mind, four years later). By today’s standards, it still holds up barring a few special effects glitches; on a good tv and with a  decent sound system, it’s glaringly obvious where Lee was replaced by his stunt double/cgi face.

The film did very well, grossing somewhere over 140 million dollars world-wide and a few sequels and a tv show. The comic book has done similar spawning with a few series under different publishers, a few novels and a sundry of statues, t-shirts and posters.

Creator James O’Barr is still very much in creative mode with a motion comic called Sundown. The Crow re-appeared earlier this year with a special edition trade paperback. 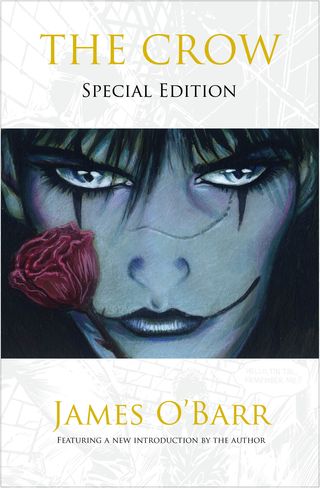 Next week… I’ll try to talk about something from the past ten years.