Greetings and salutations, dear readers! This past weekend was the Fall Toronto ComicCon; a one day show put on by the folks at Hobby Star who put on the big Fan Expo show in August in Toronto each year. The CBD crew dropped on by to check out the proceedings and snapped some photos to go with our little report. 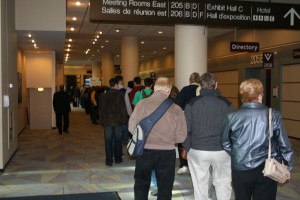 Right off the bat the show had great promise attendance wise with a slight line right as the doors opened and by the time we got in, the dealer’s room was already packing everyone in and there was a great buzz in the room. 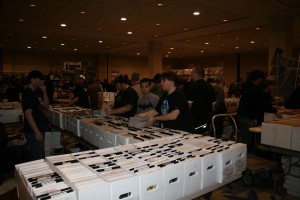 Looks like they’ve managed to sucker Kevin Boyd into manning the front desk! We saw Ahman around as well, but forgot to snap a shot of him. 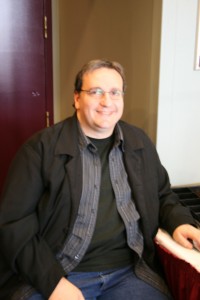 Most of the usual big suspects for dealers were there. Guys like Harley, Wes Hagen, George and Peter were all there in force. 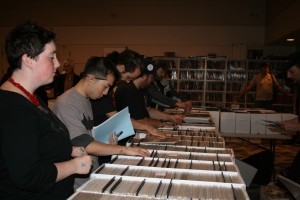 Cheapie bins definitely seemed to be the strong focus of the day as guys with long lists and ledger books pored over the 1 and 2 dollar bins. There were a few modern books that had me surprised with their aggressive pricing. I saw a ASM #583 regular cover on a wall for $25 and some early issues of Invincible from 3 to 6 priced from 40 to 60 bucks each.

Maybe it’s just due to the show being only a one day show, but there just weren’t that many costumed people this Sunday. We saw a Captain Cold, a few Silk Spectres and a Supergirl but not that many beyond that. 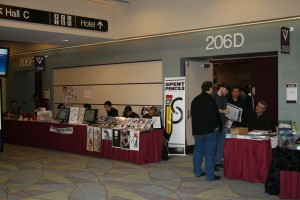 The con had a bit of an unusual setup for the artists. To the left and right of the doors were: Leonard Kirk, Marcus To, Marcio Takara, Francis Manapul and Agnes Garbowska and a few others. Dave Ross and Tom Raney were situated in the back of the dealers room. 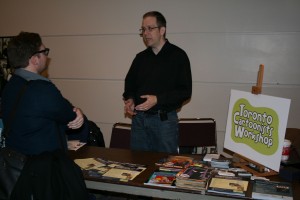 The Toronto Cartoonist’s Workshop people had a table at the show as well. These are the guys who put on the 2 day Darwyn Cooke art show and workshop last month which we did a report that you can find over here. It looks like they’ve managed to line up Guy Davis for the next showing which will be a full day event instead of a two day event. It seems that spreading the event over two days didn’t quite work out so well when everyone showed up the first night for the exhibit and their second night with an Artist Speaks event was sparsely attended due to the difficulty in getting people to come to downtown Toronto two nights in a row. 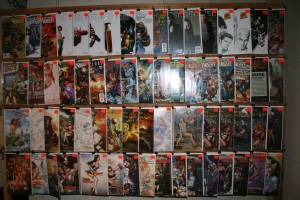 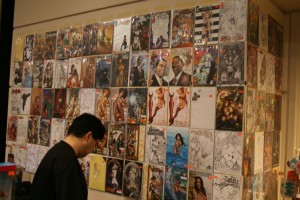 What I like to call the Wall of Scantily Clads featured at Kewl Collectibles and Myth, Legends and Heroes which focused heavily on the variant covers from Top Cow, Avatar and other Grimm Fairy Tale stuff. Variant covers were featured prominently at a number of booths with to be honest, fairly aggressive pricing on them.

As the show drew to a close, we talked to some of the dealers about what was moving, how the con went and stuff like that. So let’s kick things off with Harley. 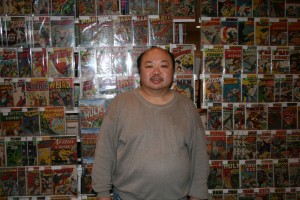 Some high grade FFs and an Amazing Spider-Man Annual 1 were the big sales at Harley’s booth with steady mid-range sales throughout the day. The most requested books from Harley at the show were Hulk 181, Captain America 100 and all sorts of Timelys. With the economic downturn, Harley is of the opinion that there’s been a slight decline in purchase this time of year. And it looks like we can look forward to seeing Harley set up at the Wizard show in March. 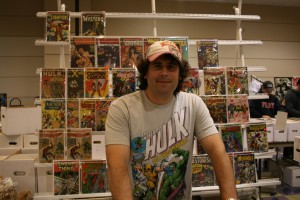 Wes’ nice big sale of the day happened to be a high grade raw Hulk 181 in 9.0/9.2 shape. Most requested titles were Hulk 181 and Green Lantern 76. The hot books of the day were books from the Golden Age era with steady mid-range and cheapie sales. What wasn’t moving at all though were the CGC books. At the time of conversation, not a single slabbed book had sold. Wes’ opinion on the matter is that more people are wanting to open and enjoy their books. Overall the show was better than expected for Wes and even in this poor economic climate, he is finding that comic buyers budget well enough that they can afford to spend the same amount year after year if they really want a book. Oh and before I forget, Wes’ other big find was a warehouse find of some near-mint Captain Canucks which were booking out of there at 10 bucks a pop! 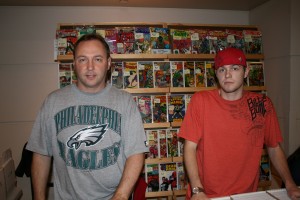 For Peter, it was all about the Marvels and the Spideys especially. Peter had a fairly steady show moving a nice grade Amazing Spider-Man #40 along with other Spideys which were the most requested books for him. One of the neat items Peter had at his booth were these old multipack of comics still in the original store wrapping. Some great books like Secret Wars 8 were featured in them. While Marvel was doing fairly strong, DC books were pure dead weight with barely a single one moving. Those hoping to catch some of Peter’s stuff at the Wizard show in March will be disappointed though to see that he will not be attending. When asked why, he pointed towards the high cost of a dealer’s table. Economy-wise, Peter also found it to be of little impact on his sales with customers buying what they want cost be damned.