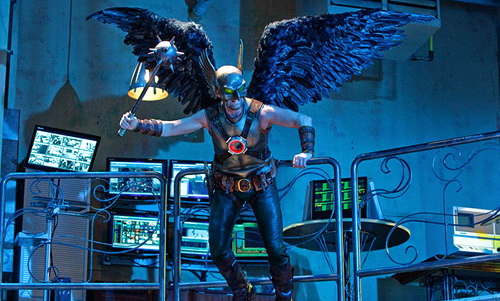 Not shown: The taco lunch he had that propelled him into the air.

I know I know, I’m a bit late to the party but I only recently had a chance to watch the Smallville Absolute Justice episode. When Smallville first came out, I watched it occasionally, maybe 4 or 5 from each of the first 3 seasons. But I still kept myself in the loop on events through the magic of Wikipedia. But when I heard that Johns was penning the Absolute Justice episode, I just knew I had to catch it. I saw the previews and was pretty excited to see it, even more so than the episodes Zatanna appear in and I am the biggest Zatanna fanboy out there. But the verdict now that I’ve seen it? It was pretty darn good bordering excellent with only a few minor quibblings.

The costumes: Everyone’s costumes looked pretty damn good. I know there were people saying that Dr Fate’s  helmet looked too plastic, but I didn’t think it took too much out of the story. The part where they showed the JSA as a painted mural was pretty cool since they put them right in their comic book costumes. It could only have been better if they used a photograph of them instead of a painting.

The Action: There was a good amount of superhero combat, we got to see flashes of Icicle versus Star Spangled Kid, Icicle Versus Stargirl, Icicle versus the JSA and JLA.

Checkmate and the Suicide Squad: If they actually follow through with the seeds planted in this episode, I am staying on this show for good. If they introduce the Checkmate system of the Kings and the Queens into this, I will have a nerdgasm. And mentioning the Suicide Squad? I hope to hell this means we may one day see Deadshot introduced to the show as a perfect foil to Green Arrow. Guns versus Arrows? Fun for everyone.

The acting: Not a huge fan of Green Arrow, I don’t know why. I can’t even explain this it may be completely irrational. But when I hear Green Arrow talk with his shades up, I just cringe deep inside. And Stargirl? Her first appearance in the hospital made me wonder if I was watching a Kindergarten production or something.

The Action: Wait I thought I said I like the action? Have I developed multiple personality disorder? Nope, I said I liked the AMOUNT of action, not the quality of it. Seriously I understand that this is a TV show so their budget is pretty low. But this many seasons in and they can’t afford a decent stunt co-ordinator or a trainer to show these guys how to really fight? Why do I see flashes of Star Wars lightsaber battles when Icicle fights anyone? Seriously, he makes a giant icicle and goes to town on people like he’s Darth Maul. I expect to hear the humming of sabers every time he showed up.

All in all, it was a great episode and if the episodes continue to be like this, I’ll keep watching the show. Oh yeah and there was some Lois Lane, Tess Mercer and Chloe stuff going on, but I tuned it all out.

David Diep is a news editor for ComicBookDaily, an assistant manager at Big B Comics and a full time Zatanna geek.