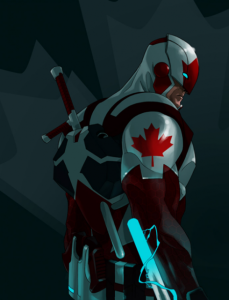 The 1st of 5 planned Captain Canuck animated webisodes aired on July 1st Canada Day to what looks like rave reviews.

There was a strong buzz among the growing fan base leading up to the posting of the 1st episode. Press coverage was extensive with MSN, Toronto Star, The National and CBCNews.ca all posting great lead in stories. Read the CBC News story here.

There was a launch party held at Toronto’s Silver Snail comic shop, those in attendance included Captain Canuck creator Richard Comely and Captain Canuck voice actor for the episode Kris Holden Reid. The atmosphere at the Snail was upbeat and expectant and when the 3 plus minute episode finally aired there was a collective pause. Will the wait be worth it?

To that question the answer is a strong yes.

This was a great start! Hats off to the production team, this was a slick little webisode. For me the magic was in the writing. Paul Gardner and Dean Henry crafted a fun, entertaining and very interesting story. I can’t wait for the second episode.

I am not alone in praising this 1st Captain Canuck episode. In the 3 days since release the youtube views are at 10,000 with 313 likes to only 3 dislikes, that’s over 99% likes to dislikes ratio. People love this episode.

The captaincanuck.com website has been a busy place these past few days and as interest grows it should get even busier. From what I understand the 5 planned episodes are to air a month apart so the countdown has already begun for the second episode.