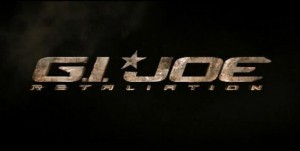 With bated breath, I like many G.I. Joe fans, waited anxiously for the premiere of the new G.I. Joe movie trailer last night.

After seeing it all I can say is… Wow!!!

This trailer has everything a G.I. Joe fan needs in a movie.  I know there are many Rise Of Cobra haters out there.  I really like that movie.  But I had been waiting for 25 years for a live action G.I. Joe movie to come out.  Even with its flaws I really enjoy Rise Of Cobra, but the Retaliation makes me want to forget all about ROC.

It is clear in the trailer that Retaliation is a sequel to Rise Of Cobra.  Zartan is still masquerading as the President (Jonathan Pryce reprising his role as the Commander in Chief) and has declared war on G.I. Joe.  The team of G.I. Joes who appear in the movie look like they are the only ones to survive Cobra’s attack.

The new trailer also addresses many issues that fans had with the first movie.

Ok now that’s out-of-the-way, let’s get to all the awesome new stuff in the trailer.

The one question I have about the new movie is what happened to the rest of Alpha team.  Scarlett, Heavy Duty, Breaker, Ripcord and General Hawk were important characters in the first G.I. Joe movie.  What has happened to them?  Were they killed, or have they gone into hiding to return for G.I. Joe 3.