Paul Pope is one of my favourite artists. I’ve never read Dune, but I did play the video game as a kid and spent many an hour sitting and waiting while whatever plane or worm I was riding was out there trying to find a sietch and become friends with fremen, oh and mine spice.. it was a weird and boring game and while many people have told me that the books are pretty wrapped up in minute details, world building and other stuff that tends to  I didn’t really appreciate it at the time – I realize that the books must’ve spoken to a whole generation and I can’t really take that away. (Plus there was some dude called Gurney Halleck which if you squint could be an anagram for Tom Selleck)

Any way, for those of you who were blown away by Paul Pope’s Strange Adventures serial in Wednesday Comics, he wants to bring that sensibility to DUNE. Check out his comic and quotes below. (I should also point out that his website (Pulphope) is well worth visiting because he really shows his thought process and inspirations behind his work.) 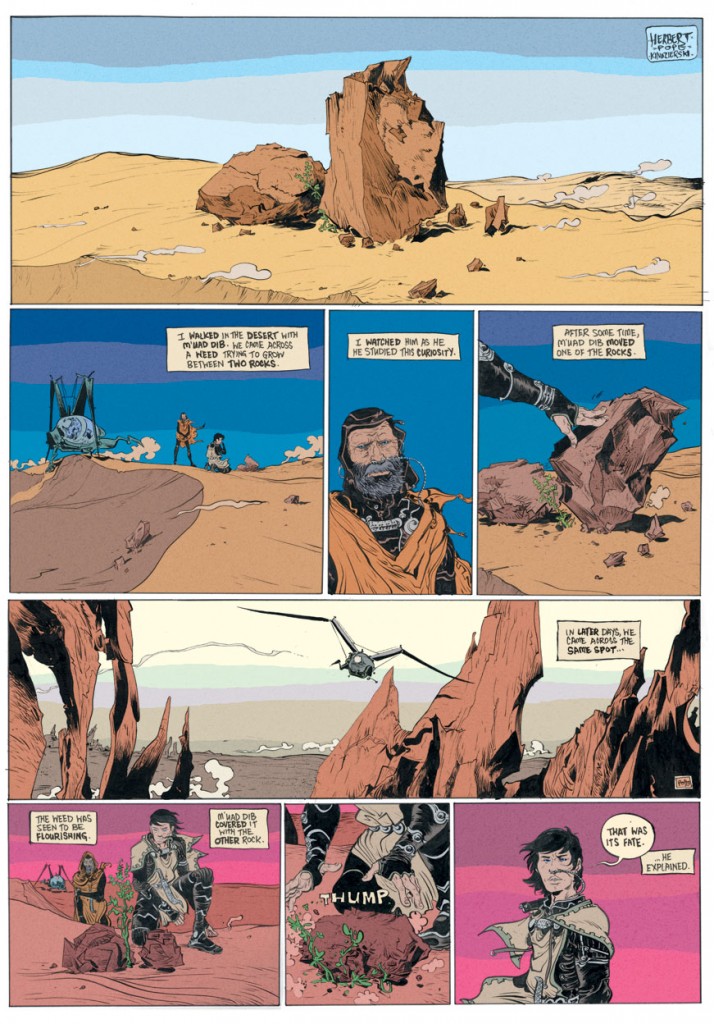 “It is said of Muad’dib that once when he saw a weed trying to grow between two rocks, he moved one of the rocks. Later, when the weed was seen to be flourishing, he covered it with the remaining rock. ‘That was its fate,’ he explained.” –From The Commentaries Of M’Uad Dib (DUNE, Frank Herbert).

I’ve always been struck by the taciturn Nietzschean aspects of M’uad Dib’s character as a leader. One of Frank Herbert’s points in DUNE was a warning– beware of charismatic heroes. When entrusted with great power, they can do great damage to a civilization. Even a brief sweep of history can illustrate this point.

I wanted to try applying the lessons learned from the Wednesday Comics experience to a different subject, here finding a source which would be difficult to illustrate as a page of comics, given that there is very little suggested action. I find that with the format of Wednesday Comics (which is really the traditional Sunday Comics page), one must condense the plot and action to the briefest yet most vivd bursts of information available– there is a lot of space on the page for the illustrations to really overwhelm the reader/viewer, but there isn’t a lot of space for story development in the sense of how we’d develop a plot or work up dialogue for a typical comic book page. In a comic book, one page may be well drawn or well written, but it is still just a single facet of a larger whole. One page can be preceded or followed by another, but no one page carries the entire weight of the sustained narrative. The Wednesday Comics single page format forces the artist to create a story unit which may well be part of a larger storyline, however it still must be able to stand alone.

This depiction of Paul M’uad Dib and the Fremen Stilgar is based on paintings John Schoenherr did for an illustrated edition of Dune published by Berkley Books in 1977. Frank Herbert said that of all the visual depictions of his ideas, Schoenherr’s work was closest to the way Dune’s people and things looked in his own mind. The colors here are by Lovern Kindzierski, who worked with me on the second half of the Strange Adventures strip.