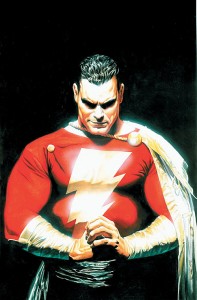 Over at Cinefools, Bill Birch; who is the writer for the upcoming Shazam movie alongside Geoff FRIGGING Johns! talks a little about the upcoming project and some other side projects he’s working on. To be honest, I wasn’t even aware they were this far into a Shazam movie project, because there’s been so little buzz about it. You tell a person on the street that there’s a Superman movie coming out and they’ll say “cool!”. You tell them that there’s a Shazam movie coming out and they’ll say “didn’t Shaq star in that?” So yeah…

Check out this except from the interview:

Obviously the one fans are going crazy over is that you are now writing Shazam with Geoff John? How did this come about?

Okay, first of all let me say that Geoff Johns is also a freakin’ stud. He’s young, smart, creative and has this crazy encyclopedic knowledge of everything DC. He’s so cool I almost hate him a little bit. Thankfully I’ve been able to put that hate aside and I’ve enjoyed every minute we’ve spent working together while breaking the new Marvel/Shazam story. Geoff and I are in the thick of it, creating a kickass update that still honors the lore that’s been created in over 50 years of Marvel storyline