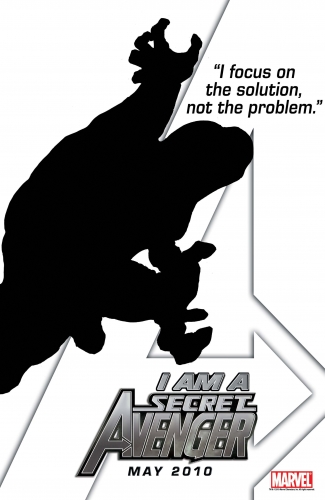 Don’t miss the brand new SECRET AVENGERS #1, from the superstar creative team of Ed Brubaker and Mike Deodato, this May!

That’s all we know right now – Marvel’s only released this teaser. This is the first I’ve heard of this series.. but I will admit to being curious. Brubaker on the Avengers seems just about right, and maybe could be a natural extension of what he’s doing with Captain America and Marvels Project.

Deodato though is an interesting choice. Seeing as he has dedicated his last few years to Norman Osborn and his various evil underlings, I wonder if this could be a continuation of that.

I’m lost as to who it could be. Will this back up my idea that Steve Rogers is going to be in charge of SHIELD and this is his black-ops team?

Everyone (and by everyone I mean most forums and Comics Should Be Good) are under the impression that it’s Beast.

I don’t know, I mean, he was an Avenger and I’d love for him to take his Team Science! and using them as their brain trust. Let’s be honest – the world needs more Doctor Nemesis.

But if you want my guess – It’s going to be Gorilla Man. I love Ken Hale.