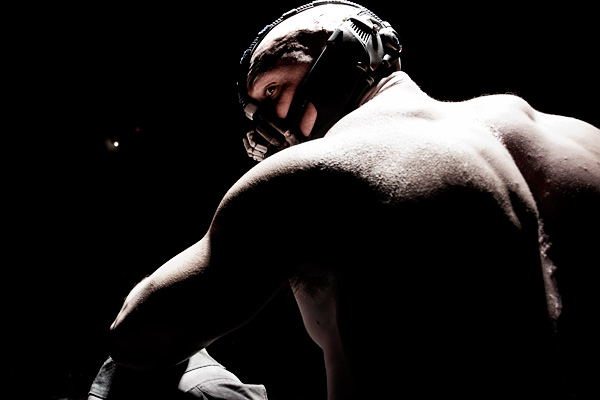 MTV seems to have been among the first to widely release the first image of Bane from The Dark Knight Rises. There was some kind of convoluted viral marketing program where fans could sift through audio clips that would eventually lead them to this teaser picture of Bane. I’m not really a huge fan of these kinds of viral marketing since I don’t really have the time to sift through clues for a little payoff. But I’m always glad when someone else does the legwork for me!

From interviews with the cast and directors, Nolan is apparently going with the original vision of Bane–almost a twisted version of Batman. He’s not going to be a massive steroid fueled brainless brawler that was last seen in Batman and Robin. Think more like the mastermind in his first appearance, when he orchestrated a crime wave to wear down Batman, before finally confronting him and breaking his back. Or, his current appearance in Gail Simone’s Secret Six, though a little less obsessed with providing a father figure for Scandal Savage. In the photo, they seem to have removed the cloth mask he usually wears, which is good, as I can’t really see it translating well to the movie screen. Instead, he’s got some kind of protective headgear that makes him look more like a MMA fighter than supervillain. We also don’t have any idea whether or not he’s going to make use of Venom, the strength enhancing drug that gives him a hulked out appearance. The helmet doesn’t look like it has the injection mechanism for the drug but maybe he already has it in his system which explains the weird wrinkly appearance of his skull. Either way, give us your thoughts on Bane.