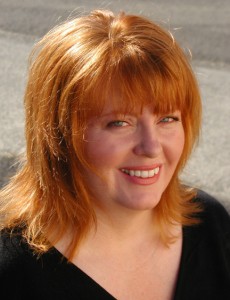 On the last saturday of the Toronto Wizard  World Con, I had the opportunity to speak with one of my favourite authors, Gail Simone. Here’s a transcript of our conversation….

Shelley Smarz: So I think I speak for everyone at Comic Book Daily when I say that we’re huge fans of your tweets and we were all really surprised when you of all people were labeled misogynist and homophobic leading to the wonderful Twitter thread “Gail hates women”. What was the story with that? By the time I came across it, so much had been deleted of the exchange between the two of you that I was just really curious. I know the storyline of how it started, but did this person just contact you and say, “Oh by the way, how could you? You are a betrayer of all that is good about feminism?”

Gail Simone: It was on a DC message board, so he didn’t contact me directly. 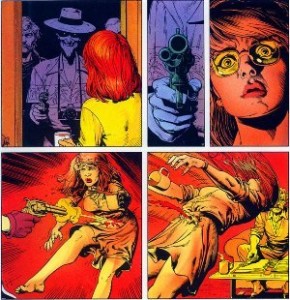 Gail Simone: I think it was already sort of on its way to changing when I developed the site, which was in 1999, so that’s a good thing because we were coming out of the ’90s and the whole bad girl comics and a lot of storylines where the female characters met pretty violent ends or were forever changed, as in the case of Batgirl being shot in the spine by the Joker. Now since she became Oracle, it’s now a story of survival; in the particular work of The Killing Joke it wasn’t. The site was never designed to say we can’t have bad things happen to female characters. If you’ve read my writing, you know that bad things happen to female characters anyway. It’s just that we don’t want a trend, and we don’t want it to be done so casually or the story to be designed only for the female character to be the plot device that gets the male character to stare off in the sunset and vow his revenge. Then the story becomes a revenge story, not a story about the victim. I think it has made a difference.

Shelley Smarz: Good. I think it has a lot to do with an increased presence of vocalization of female fans.

Gail Simone: Oh, I think so too. The online community has really made their wishes known.  At the time they were wondering why we don’t have more female readers of comics. My question was maybe you should take a look at this because if you’ve been a follower of a female character that you’ve really loved and admired and identified with and followed through their stories, then all of a sudden they are casually maimed or raped or chopped up and put into a refrigerator or whatever, it’s kind of hard to keep reading those stories all the time. It definitely has made a difference, the more diverse creators we get, the more difference it makes too. I think that over all, the industry is pretty great, right now.

Shelley Smarz: I think it makes writers, not more accountable for what they write, but more creative because you sort of get the feeling that if a writer is looking for something bad to happen to a female character, oh well she’d be raped, and there wasn’t much, I don’t want to say creativity, but that was sort of the go to point.

Shelley Smarz: It was never psychological, it was just “she needs to be raped” and that’s the only was that, if we’re going to have her grow, or propel her story forward. It was very troubling. 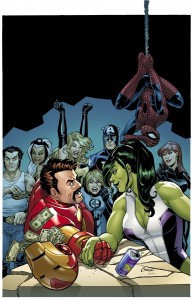 Shelley Smarz: So talking about getting more women to read super hero comics specifically, Marvel Her-oes and Girl Comics, do you think that’s a step in the right direction, or do you think it’s just Marvel Comics pandering to a market that they just don’t quite understand?

Gail Simone: I can’t really speak for Marvel, and I do know that the creators involved, the female creators involved, are really high calibre and really talented so I’m sure the work will be great.  I just look forward to the day where we don’t have to be separated, isolated and segregated like that. Also, to put out there that not all girls like pink bunnies and unicorns, so if you think that you’re going to market to a specific female audience, you might want to look at what the female audience actually does read. It’s pretty diverse. It’s not just quote “girly” stuff all the time.

Shelley Smarz: To go off in a different direction, I’ve been asking everyone here about the reaction to the Apple iPad. Do you think it’s going to be the doom for the print medium of comics, or do you think it’s actually going to help revitalize?

Gail Simone: I do not think it’s going to be the doom. I f we don’t do something, then we aren’t going to keep the younger readers who are so used to doing stuff digitally. So that is what I’m more concerned about personally, keeping a younger and a new audience coming in all the time so I think that if we approach it that way we’re gaining new readers by having more options to read the story. I don’t think it’s going to kill the print because most of us like the printed comics. We want to hold them, we want see the art and touch the art as much as we can, but I don’t see anything wrong with having a digital format. Personally, I just think that that’s the direction we’re going, and if you don’t open up to it, then that’s where the problems will start coming in. If you resist any of it for too long, then it might narrow the audience.

Shelley Smarz: I feel the same way.  I’m very excited. On the one hand, it’s like I want a digital reader. On the other, I know I’m always going to have my singles in my long box at home. That’s been pretty much the uniform response from comics’ creators that we’ve spoke to.

Gail Simone: I feel that it will do nothing but good in the long run.

Shelley Smarz: So we’re all sad to hear that your run on Wonder Woman is over. Do you feel you’ve said all you wanted to say with the character?

Gail Simone: I’m really proud of what we’ve done with Wonder Woman since I’ve been writing her, but like with anything that I write, I always feel like I could keep going.  I don’t know if it’s just that I talk too much or what, but I really get involved with the characters that I work on so if it came up and I was going to write Wonder Woman stories for another five years, I wouldn’t have a problem with that.

Shelley Smarz: So do you think that there will one day be a return?

Gail Simone: It’s hard to say. I do know that it’s not the end of me writing Wonder Woman. It’s the end for now of the monthly book for me. 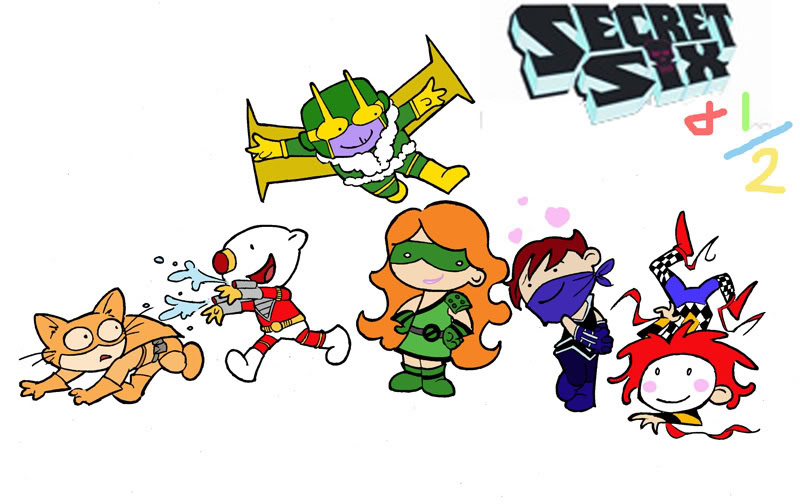 Shelley Smarz: The mark of a really awesome comic book creator is just making people care about characters that are sort of… I hate to use the term C-List, but you did this with Bane, and Catman in Secret Six especially, and you’ve made us really care about these characters that were sort of off to the side. Is there a potential that you see in these characters? Do you just root for the underdog?

Gail Simone: I do like to root for the underdog, and I do really like characters that are beaten down and then they’ve got to pick themselves up by their bootstraps and make something out of their life. So yes, I am attracted to those characters. But I love, DC has such a wealth of characters to draw from, and it’s fun for me to go and find one that maybe hasn’t been used for a while, or maybe has been used in a different way and try to show the potential that I feel they have by getting deeper and deeper into their character. I love manipulating the reader to get them to be on their side or at least find them interesting again.  So yeah, it’s one of my favourite things to do.

Shelley Smarz: We’re all excited for your return to Birds of Prey. Are there any teases of future story arcs that you can give us? Just a tidbit? 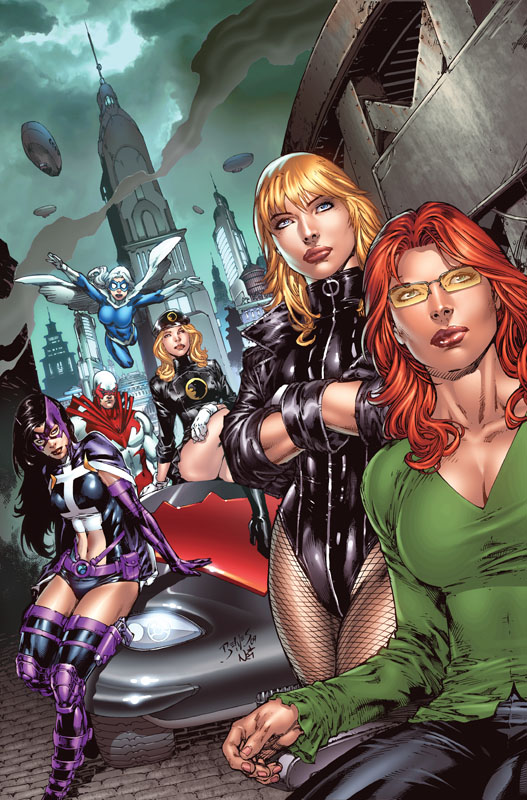 Gail Simone: You know how I am, if I could lie in the Previews, I would.  I think the one thing that I can say is that by the first page of Birds of Prey; you know who Black Canary is for one thing. And then I’ve created a new villain who is very scary and terrifying and scares even me when I’m writing in the middle of the night. I’m looking forward to the readers getting to meet her.

Shelley Smarz: Awesome. I cannot wait. I’m a huge fan. And finally, with your long awaited return to Welcome to Tranquility which was one of my all time favourite books.

Shelley Smarz: Do you think you will ever do separate mini-series where you will explore the retro back-stories of all of these retired super heroes?  Because I really want to learn more about their careers as superheroes.

Gail Simone: I have so many stories I could tell in Welcome to Tranquility. Anything is possible in the future for that.

Shelley Smarz: Excellent. Will we ever see you pen a Big Barda/Mister Miracle love story?

Gail Simone: Oooh, I don’t know.  That’s something to think about though.  I love both those characters so that would be fun.

Shelley Smarz: Excellent.  Thank you so much. 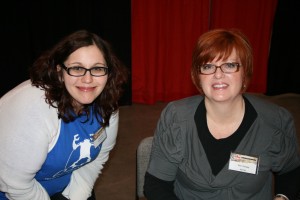 Shelley Smarz is a life-time comic book fan and a comic book scholar. She’s currently finishing her MBA at Ryerson University in Toronto, ON. She’s looking forward until the end of April when she can get to that giant pile of comics and graphic novels that has accumulated since Christmas.