Kayla Marie Hillier’s webcomic Galavant tells those tiny trip details that remain with the traveler long after most of the memories from the trip collapse together. Based on the three-month period she spent in the United Kingdom from December 2009 through March 2010, this once-weekly webcomic showcases the Hillier’s stunning artistic and storytelling ability. Having previously participated in Julia Scheele’s 69 Love Songs, Illustrated, we expect many great things from this up and coming webcomics’ creator. 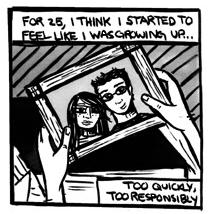 Galavant is going to be a ‘slice of life’, autobio type of thing. Just documenting the little moments of note throughout my three months of travel in the UK from December 2009-March 2010. I say “going to be” as I’m just starting out, so this is what I have in mind. I’m really just trying to capture this juncture which lead to complete abandon on my part. I’m usually quite reasonable, just somewhere down the line I decided to put responsibility on the back burner. It’s a little too
soon to really know what the tone will be, but I’m certain there’s going to be some silly pub moments, mixed with some sightseeing adventures and thoughtful soul searching on my part too. I had a lot to sift through.

What motivated you to tell this story as a webcomic? Was it your intent to do a webcomic based on your travels from the start?

It was never my intent to do a webcomic. I’d pondered just documenting a few pieces here and there for a mini comic or zine- if you’d talked to me even in late February I don’t think I’d have ever thought that I’d find myself here. To be honest I hadn’t really followed many
webcomics until January. One afternoon I decided to sit down and read all of Rene Engstrom’s “Anders Loves Maria” and that turned into a bit a gateway drug. I was already drawing snippets from a relationship I’d been in for my “Isolated Moments” zine, so between doing that I 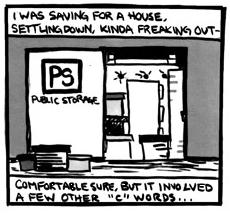 started to draw snippets of my trip thinking I could potentially print two zines for the Alternative Press Fair (held in London in February) with very different tones. When that didn’t pan out that’s when I started thinking about what to do with these pages. I decided to use them as a vehicle to ensure that I’m drawing something and putting it out there each week- then I could concentrate on other projects and ideas in my down time.

The main motivation really is to satisfy my own OCD desire to document everything. I just think it’s neat that while I’m documenting this one experience other people may dig it too. That’s what I like to call a pile of win.

You say that Jeffrey Brown is one of your influences – how so and why?

I started getting into comics pretty late compared to most people. I grew up in a tiny village with no comic shop and the internet wasn’t really what it is today- chalk full of comic-goodness. So I had limited resources.

I started out looking at people like Frank Miller deciding that although I dig the artwork, the stories weren’t really my thing, then moving on to people like Brian Wood who were much closer to the type of stories I liked- but at the end of the day, I’m not really into superheroes and that whole bit. I do like sci-fi but it’s not the top of my totem pole. Then I found Clumsy while perusing the “Little Books” shelf (one of my favourite shelves) in The Beguiling and I had
an a-ha moment. I’m just really that nosey. Even when I’m buying books I still tend to veer towards what I call “self deprecating relationship humour” – or just in general stories that talk about real people, things that are relate-able and human. I love that kind of thing. Now I pretty much swoon over the vast majority of Top Shelf and D&Q titles. 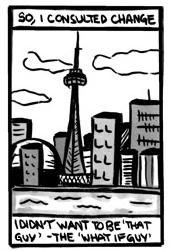 Jeffrey Brown pretty much just allowed me to see that everyone’s lives are interesting and worth telling. I would always ask myself if anyone would care about my own experiences specifically, of course I care because they’re mine and I lived through it, but that doesn’t mean someone else will give a shit. But it happens to me over and over again with more and more artists, that I do care and I want to hear their stories. So he kind of hammered that home for me, that what you
have to say is worth saying.

You’ve appeared in both The Everyday and Ellerbisms – both of those webcomics are similar slice of life type stories that sometimes delve into some fairly personal subject matter. What kind of tone can we expect from future installments of To Galavant?

There’s definitely going to be some silly moments ahead but my trip wasn’t a cake walk and I did do a lot of thinking while I was out there. So although you can expect some travel info and the general funny one liners. There’s probably going to be a few installments that cut a little closer. I did get lonely at times and although I started to date someone over there, there’s all the uncertainty that goes along with that- not to mention that looming over my head was always
the reality that when I came back to Toronto I would be unemployed, I wouldn’t have a place to live immediately, all my belongings were in storage and I’d have to figure out what my next step was. (I think I changed my plan of attack 12 times…) But I’m going to try to be as honest as I can at the end of the day. I’m not just going to highlight the “woo travel!” moments. Sometimes travel is shitty. 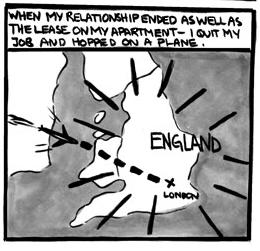 Once the story of your London adventure is over – do you plan on continuing the series with a different trip? Or this a finite series?

I think this is going to be a finite series. I may do other webcomics afterwards- but I think as far as this goes I have a specific period of time to work with and once I reach the end that’s it. Which is kinda nice to be honest. When you have things like The Everyday or Ellerbisms it’s harder to find a natural end because Everyday moments will keep happening and Marc will keep on living. I kinda got a bit of a break in that regard. I don’t have to make the tough decision of how to end things. It’s already there. I find comfort in that.

Does your background in film effect your layouts and maybe how you choose to tell the story?

I think on a subconscious level it does. You can’t study something for years without some of it sticking. I think it’d be most evident in how I choose to frame stuff and the types of panels I use. But I’m not as visual a thinker as some people that I know. In general words come first and then I decided how to place things on the page. Other people have the images in mind and work the words around what they’re already saying through what they’ve drawn. 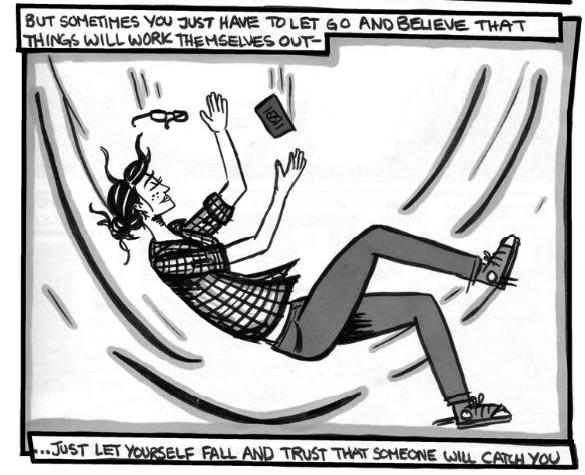 I think the major difference is that writing novels comes easier for me. I don’t think about it as hard as I do with the webcomic. I love both. Just writing is a bit more natural. Maybe this will change the more I do it, but the planning that goes into each installment of Galavant vs. when I’m workin’ on a book- is like night and day. I can sit and write page after page with the novels but I’ll agonize for hours over a single panel that I’m drawing.

How did you get involved in 69 Love Songs, Illustrated?

This question also answers “How did you get into drawing comics?” At TCAF in 2007 I met Tom Humberstone who is a fantastic comic artist based in London. At TCAF in 2009 we talked again and I let him know that I was going on vacation to London for 8-9 days in September so we kept in touch so we could hang out. In September he introduced me to Julia Scheele who is another fantastic artist living in London who I was aware of because Tom had done two comics for her 69 Love Songs, Illustrated project. At some point she asked me if I draw- I told her I do but that I hadn’t really touched it in at least 2 years. Her response was that I had an October deadline to get a song in and she promptly added my name to the list of artists on the website. So I got involved through Julia’s insistence that I start to draw again and that I better do it now. I took her deadline seriously and my illustration for The Queen of the Savages was the first thing that I’d drawn in ages and the first that I’d ever inked in my life.

And, finally, what would your high school/elementary school teacher think of your work today?

They’d probably think “yep, that’s about right”. I was “that kid” in elementary school- the one that could draw, there were a few kids who tromped in as competition but I still held on to that title pretty steady throughout those years. High School was a bit different because some people were just insanely good artists but I always did well in my visual art classes- I don’t think I’m doing anything right now that would blow their minds, so I think I’d just get a nod.