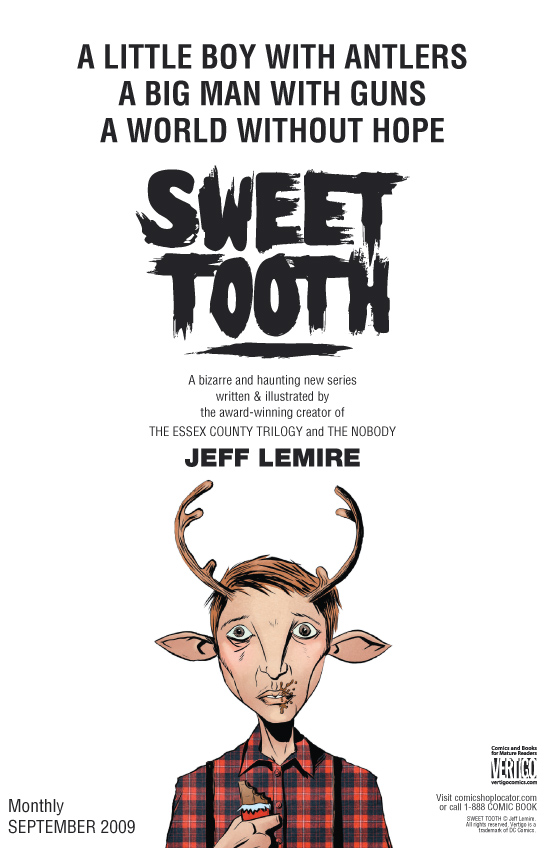 You don’t often come across that many brand new writer/artists working for the Big Two anymore, that could be the reason why Jeff Lemire seems like such a rarity in this industry.  He’s known for slice of life, lyrical biographical stories like Lost Dogs, the Essex County trilogy and the HG Welles inspired The Nobody.

He’s currently writing and drawing the sprawling  Sweet Tooth. A series about a boy named Gus  who is part of a rare new breed of human/animal hybrid that emerged from a unknown ‘accident’.  This breed is also apparently immune to the infection that still continues to kill.

Shawn Young: I recently read that you plan to end Sweet Tooth at or around issue 40?

Jeff Lemire: You know I have the story all scripted and I don’t really see it going much longer than that.

SY: So you don’t feel like there are any other areas or characters you would like to explore?

JL: No, that’s giving me a lot of leeway. I think it I really had to I could wrap it up at 25 or 30. But this is going to give me a little more room as I introduce more characters. So I think that’s a safe number 35, 40. 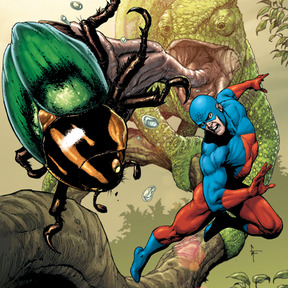 SY: You’re going to be working on the Atom? How are you finding your voice in superhero comics?

JL: You know it’s so early in the process of doing that work. I’ve literally just written an outline for one book and the first script for the Atom, so it’s literally the first steps. So I’m still feeling my way out. I’m still trying to figure out how to work with an artist and work with editors. And still maintain some resemblance of my storytelling voice and bring it to these characters. It’s interesting and at the end of the day I might not succeed, but it’s something worth trying and I love those old DC characters so much I couldn’t pass it up.

SY: There’s a nostalgic value to them?

JL: Yeah it’s nostalgia and I just love all kinds of comics and I still love superhero comics and the indiest indie comics. If something is good, it’s good. I’m not going to turn my nose up at the mainstream stuff. It’s done well and I’m totally into it. So hopefully I can do it well.

SY: How are you finding the editorial process?

JL: It’s very different from Vertigo. At first it was a little off putting, Vertigo gives me so much free rain. Basically I’m doing my own thing, I hand in the pages and they co-ordinate things. With DC it’s much more hands on, there are three or four group editors who are in on the story writing process to be honest on the whole direction of the book. At first I was like ‘Oh geez, how am I going to tell the stories I want to tell’ but the more you get into it the more you realize that kind of collaboration can be fun. Because I’m so used to doing everything on my own it’s a nice change to have this other project where I can get to bounce idea’s off guys. These are characters that they own and that they care about the direction of. And they want me to tell the stories and they want my idea’s.

SY: How closely are you working with Geoff Johns?

JL: We talk once a week. The two projects that I’m working on are directly picking up where Geoff left off. When does this interview come out?

SY: When would you like it to come out?

JL: Well there is an announcement coming out on Friday that I’ll be writing the new Superboy.

So I’m picking up a lot of the storylines and characters he introduced in Adventure Comics and taking them in a new direction. He didn’t give me any direction as far as what he intended to do or anything. On the Atom I’m pretty much on my own. But then there is some stuff we’re talking about doing next year that will be really closely related to things Geoff has planned.

SY: Is it leaving you enough time to work on your creator owned properties?

JL: Yeah, I’m still on my monthly Sweet Tooth schedule, I’m way ahead. And I’m doing another graphic novel for Top Shelf. On the writing side it is so much different, it’s challenging and it takes time but it doesn’t take nearly as much time as it does to draw. I can kind of balance the two, if I spend just one day a week writing and then I can draw the rest of the week.

Volume One of Sweet Tooth is available in stores now, with Volume Two to be released in October. You can follow Jeff Lemire at www.twitter.com/JeffLemire and jefflemire.blogspot.com.