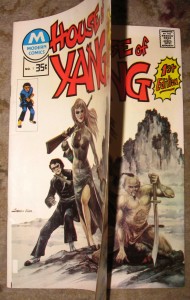 Basically a comic book with a double cover is the result of a factory binding defect. Somehow two (and sometimes 3 or more) covers get scooped up by the rollers and get bent and stapled to the rest of the book.

Double covers have always been coveted by collectors for their scarcity. In the last decade a very good financial reason to like double covers has been established as well. The CGC grading company will assign a grade to a double cover comic book based on the highest cover grade. Even when a comic book has 6 covers CGC will give the comic book a grade with each cover and note them on the label. The highest grade gets put into the main grade square on the left side of the label. Now just think about a comic book with a double cover for a second. The outside cover bears the brunt of the wear and tear leaving inside cover relatively untouched.

Double covers on newer comics are a bit scarcer thanks to better printing technology. Some modern double covers still do surface but because of the modern age nature of collecting comic books (namely read them once and then put then away) there is often very little difference between the grades for each of these covers.