Warren Ellis once said, sometime, somewhere long ago that, “the idea of superheroes dominating comic books was as ludicrous as all novels only being written about nurses.” What he means is that we have in ‘sequential art’ is a intelligent and groundbreaking medium that can tell wonderful stories, but we tend to dedicate a large amount of time to costumed gods with whom maintaining the status quo is what readers really want.

Crime comics began in 1942 with the publication of Crime Does Not Pay. As sales for superhero comic books declined in the years after World War II, other publishers began to emulate the popular format, content and subject matter of Crime Does Not Pay, leading to a deluge of crime-themed comics. Crime, especially those published by EC Comics, came under official scrutiny in the late 1940s and early 1950s, leading to legislation and the creation of the Comics Code Authority in 1954. This code placed limits on the degree and kind of criminal activity that could be depicted in American comic books, effectively sounding the death knell for crime comics and their adult themes. . This makes the resurgence of crime comics really exciting. While crime has never really gone anywhere; lately it seems like it’s really only been tagged as the second part of a hyphen.

I’ve never been a sci-fi type of guy, as much as I can appreciate the return of silver-age thought concepts in modern comic books (I’m looking at you Grant Morrison.) as well as the mature, humane side of superheroes (Oh, hey Brian Michael Bendis and Geoff Johns), I find it almost impossible to really care for these characters because they are corporate owned properties where death (perhaps the greatest threat that hangs over any superheroes head) really only means ‘brief hiatus’

A greater part of classic and enduring works of literature usually revolve around crime of some sort, perhaps this is why tales of super heroics usually fall flat in comparison to the very human emotion involved in a crime story. Shakespeare’s greatest works are often wrapped around crime, as it tends to shows the human condition at its most desperate. The possibilities available within the context of crime offer so much more in comparison to the standard of epic space battles, end of time era catastrophes, and time traveling paradoxes.

Marvel even realized the potential when it recast many of it’s heroes in the ‘noir’ line of comics that debuted earlier this year, something that was so successful that it not only spun off its own line, but as was announced at this years Comic-Con, has now spawned a sequel. Keep in mind that no one’s doubting that there’s plenty of crime archetypes available in superhero comics; Daredevil echoes more of the Jim Thompson crime school, while Batman embodies quite literally what Chandler said of the modern detective, “Down these mean streets a man must go who is not himself mean, who is neither tarnished nor afraid. He is the hero, he is everything.” 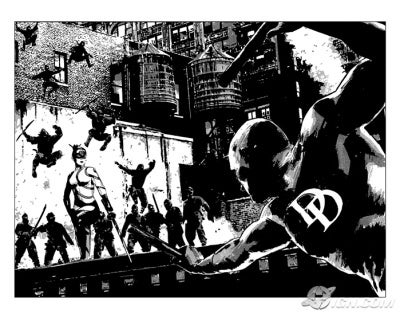 If you need more proof that we’re in the midst of a golden crime age just look at the fact that 100 Bullets, the 100 issue, eight year epic comic by Brian Azzarello (writer of the Joker GN) and legendary artist Eduardo Risso (more on him later). The success of 100 Bullets only urged on Vertigo’s decision to start up a new line of original black and white hardcover graphic novels under the Vertigo Crime imprint. The first two titles are set to come out this August. One being acclaimed Scottish crime writer Ian Rankin’s Dark Entries and the aforementioned Azzarello’s Filthy Rich. This does not even include the fact that Vertigo is home to Scalped by Jason Aaron, which has I could only describe as The Sopranos on an Indian Reservation, except grittier, dirtier and a whole lot meaner.

Meanwhile award winning artist and writer Darwyn Cooke is currently in the midst of adapting Donald Westlake’s (writing as Richard Stark) seminal crime novels featuring Parker, a ruthless thug who does whatever it takes to get what he wants (usually money), and he doesn’t care about a living soul other than himself. The first volume, The Hunter was released in July to positive reviews.

While back over at Marvel you can find Ed Brubaker doing the best work of his career with Criminal, four volumes, thus far, of compelling standalone, interconnected stories about thieves, killers, lowlifes and addicts. Criminal harkens back to his earliest works of slacker noir, Scene of the Crime and The Fall. Another Marvel scribe, many of us know Brian Michael Bendis for his talky superhero work of late. Bendis in fact started his career working as artist/writer on books featuring con artists and mobsters in Goldfish, the spaghetti western infused bounty hunter story Jinx, and the true crime story Torso which focuses on post-Untouchables’ Elliot Ness and his hunt for America’s first serial killer.

Europe, in comparison to North America, has a much broader scope in terms of its crime line. Eduardo Risso cut his teeth on such titles as Chicanos which follows an unattractive female immigrant trying to make it as a private detective in New York City. Jacque Tardi’s The Bloody Streets of Paris was a detective story set amongst the Nazi occupation of Paris during WW2 and is expected to be re-released later this year by Fantagraphics.

Back in North America Paul Pope uses European and Japanese influence to take on Phillip K. Dick’s futuristic drug addled detective with Heavy Liquid, a story that involves art that doubles as a drug, hoods who wear Halloween masks, and long lost love. At its core it is about ‘S’, an ex-cop in a snake-skin outfit trying to extricate himself from drug dealers and terrorists and find his missing ex-girlfriend. For more off the beaten path finds you can do no better than Matt Kindt’s inventive use of storytelling in the WW2 story of espionage Super Spy. While the art might not be for everyone, it’s a fantastic story told out of sequence that manages to amaze you on each page while remaining factually accurate. He previously released Pistolwhip concerning a hotel detective with dreams of grandeur that showcases his knack for kinetic and inventive storytelling style.

Union Station by Ande Parks and Eduardo Barreto is returning to print in a brand new edition from Oni publishing. Oni most likely wants to make sure that there are plenty of copies around now that the movie Public Enemies hit theatres. The two stories contain some of the same characters. The real-life lawman Melvin Purvis and outlaw Pretty Boy Floyd are showcased in both tales, and they even cover some of the same events. Oni is also responsible for Greg Rucka’s Alaska based murder mystery Whiteout as well as the forthcoming You Have Killed Me. James S. Rich and Joelle Jones partner up to present a more classic film noir story that could have come from a classic Bogart film complete with private eye, a dame from his past and a bunch of the emotional baggage he thought he’d left behind forever

Of course this is just tip of the iceberg. From reprints from EC Comic classic crime line of the 1940s and 50s, to even some of the best (which is saying a lot) of Will Eisner’s run on The Spirit contain some of the most intense crime stories ever put to paper. Crime comics are back with a vengeance and with a variety never seen before.