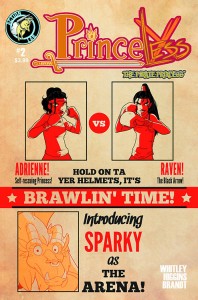 Picture it if you will: Thirty barely-pubescent human beings massed together on the parking lot of the out-of-business Wahoo Burger, across the street from Carson City Junior High School. In the middle of that mass is an area about fifteen feet across and in the middle of that area, Lavinda Copperthwaite and Cecily Snodgrass are beating the tee-total hell out of each other.

Part of that mass is the seventh grade version of me straining to see the white-hot action of the greatest girl-fight in history.

It was an honor and a privilege to be one of those select few to witness the most amazing throwdown since Kirk Morris squared off against Iloosh Koshabe in ‘Hercules, Samson & Ulysses”.

Lavinda was working the body, while Cecily relied on her speed to dodge and counter-punch. The Classic match up of Brute Force against Quickness. At the time, I was not excited about the pugilistic arts on display, or whether they were strict in their observation of Marquis of Queensbury rules. I was there because…well it was a Girl Fight, for God’s sake!

The only motivation the Male Human has when watching a girl fight is the chance that clothes are going to be torn and ultimately torn off. You can lie all you want, but if you have a Y chromosome, that is the truth.

No Clothing Was Harmed In the Making of  Action Lab’s “Princeless: The Pirate Princess’ #2

The dragon’s share of this issue is a knock-down, drag-out girl-fight. And it is fun to watch, despite the lack of clothes torn, let alone torn off.

‘Princeless’ wins the award for Truth In Labelling. It is dude-free. If the Disney Princesses banded together and gave the heave-ho to all their princes, and then had their own show on the OWN Network, it would be Princeless. 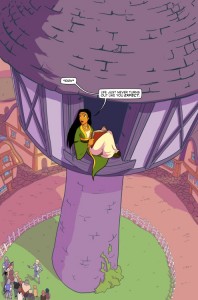 In this story, two of those princeless princesses go all MMA on each other on the back of a dragon. Swords, fists, and knees fly. There are cool moves, fake-outs and reversals ( the equivalent of Wesley telling Inigo Montoya: “I am not left-handed either”).

And it all works.

Jeremy Whitley writes nice dialogue. It’s got great pace and a terrific sense of humor. Characters develop, and change as do relationships..you know, the way they are supposed to in good story-telling.

The art by Ted Brandt and Rosy Higgins is what really makes this issue sing. If you do a 12-page fight scene you better have a great handle on movement, a firm grasp of lay-out, and a big bucket of energy. This art has it all.

But we must address the elephant in the room, especially since I was the one that opened the door and let the pachyderm in.

I do not know Ted Brandt or Rosy Higgins, but if I were a betting man, I would wager they each own shelves and shelves of Disney DVD’s (Maybe even VHS tapes). 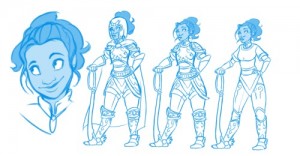 The Princeless comics appear to be unabashed in their love of the Disney princesses, up to and defined by, that Disney Princess look. And they nailed it! And there’s not a darned thing wrong with that. These are completely different characters with their own personalities, backgrounds, dreams, and flaws. It has a strong Disney presentational style in both words and graphics, but hey, it’s been working since Uncle Walt drew that skinny-legged mouse driving a Steamboat. I think that’s a proven template to follow.

This is the ultimate Disney fan Team-up book.

But I love it for another reason. I am always looking for good comics to share with my niece.

Pidge is three years old and is already interested in reading. We hunker down on the couch and read comics together. I do a lion’s share of the reading, but she is in charge of the wonderment.

This book is on top of my “Pidge’s Wonderment Pile”

I give ‘Princeless: The Pirate Princess’ #2