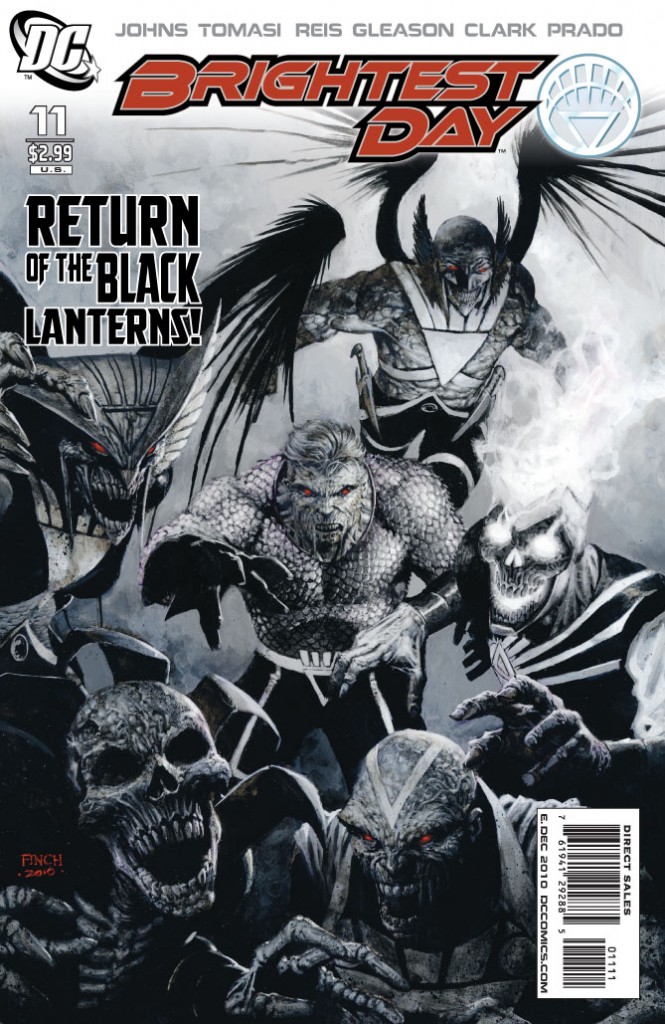 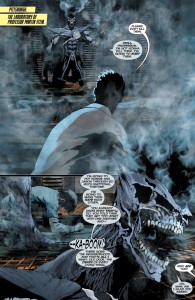 The Black Lanterns return! Johns and Tomasi return with the 11th installment in the Brightest Day maxi-series. How does this one compare to the previous issues? Will it blow you away like issue seven, or will it leave you grabbing for your own hair? Scroll down for something resembling an answer.

In the wake of Blackest Night, 12 heroes and villains return from beyond. Each of them has a purpose to fulfill before the next great hero arrives to embrace the white entity and save the universe. 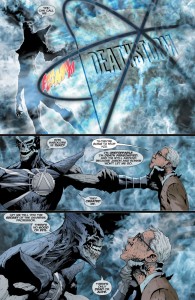 Picking up where the last issue left off, Deathstorm confronts Professor Stein and merges with him a la classic Firestorm. With that, the slightly cartoon ninja turtle Michelangelo-esque Deathstorm gains access to the highly tuned brain of Stein. In response, Ronnie and Jason merge to become Firestorm and fight Deathstorm. Knowing that they’re unstable, Deathstorm summons Jason’s dad to their location and merges with him as well. With both Stein and Alvin Rusch inside him, Deathstorm does what he can to unbalance the boys and cause them to go out with a big bang. Deathstorm goes on a “road trip”, and disappears. Jason and Ronnie follow him to New Mexico where the White Lantern rests. Deathstorm picks it up and it appears to get infected, and all of a sudden the black lanterns rise. Trouble is a foot.

In the other main story, we return to the battle between Aquaman, Manta, Jackson and Siren. Aquaman and Black Manta go head to head for several pages before Aquaman subdues Manta and escapes with Jackson and his father. Aquaman and company drive off the truck they more or less commandeered. Aquaman grabs Jackson’s arm and forces his hand towards the giant seashell he’d grabbed in an earlier issue. A map quickly appears, and then…

Martian Manhunter appears above the earth. Flying towards Mars, we finally see the forest he’s intended to burn. Mars is reborn. 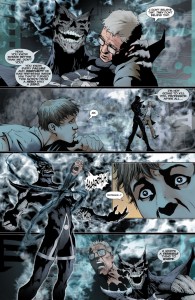 Ivan Reis and Scott Clark have provided consistently fantastic art, and with this issue’s focus on Aquaman and Firestorm, we get an overload of great work from these two. The fiery effects in the Firestorm pages, whether from Deathstorm or Firestorm are fantastic and flat just look cool. Meanwhile, Reis continues his solid work combining his attention to detail in characters’ faces, shading, and the environmental effects, which are on full display during the Aquaman-Black Manta battle. This may very well be the shortest review of a book’s art I ever write, it’s that good and there’s nothing more I can say that won’t sound like gushing.

There is however the matter of the Martian Manhunter art towards the end, which I still don’t like all that much. It pales in comparison to the rest of the book’s art, which is just fantastic. 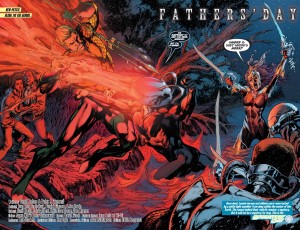 Very little happened in this issue, but that’s perhaps due to the rumoured blockbuster development in the near future. For the most part this issue sets up plot points for future issues, such as the revelation behind what’s inside the seashell Aquaman’s been carrying around. We also saw the return of the Black Lanterns as their own separate entities apart from the actual bodies they mimic. The first of these, of course, was Deathstorm who had appeared at the end of the last issue. Here he merges with both Professor Stein, and Jason’s dad, Alvin in order destabilize Ronnie and Jason emotionally in an attempt to trigger new big bang.

The plot revelations along with the art forged a solid issue here, one of the better one’s through the series’ first 11 issues. Johns and Tomasi broke away from their recent layout, choosing to alternate every few pages between the Aquaman and Firestorm stories. This layout works as well as the sandwich structure used in the most recent issues, but that’s because they’ve decided to focus on select characters for the individual issues. The more they try to include, the more problematic it becomes for the continuity of the issue and subsequently disjoints it. The only problem that still comes with this is if we’re going to focus on certain characters for extended periods, we’re not including stories like Hawkman’s or Brand’s, neither of which I can really recall at the moment. It’s a continuing problem with this format. Granted it’s been addressed fairly well since the opening issues, but trying to do too much and include too many characters has proved problematic.

I personally enjoyed the issue, but the problems I’m starting to see include a lack of accessibility to new readers. This issue, for example, doesn’t lend itself to anyone just picking up this issue; it requires knowing what happened prior. Otherwise, who cares that Deathstorm fused with such and such, or Aquaman opened a shell and found a map. Why should the reader care? The individual issues lack context, and

when you’re rotating these characters in and out, it’s not going to maintain consistent interest or bring new readers in. That’s too bad, because the series has dramatically improved since the first six issues.