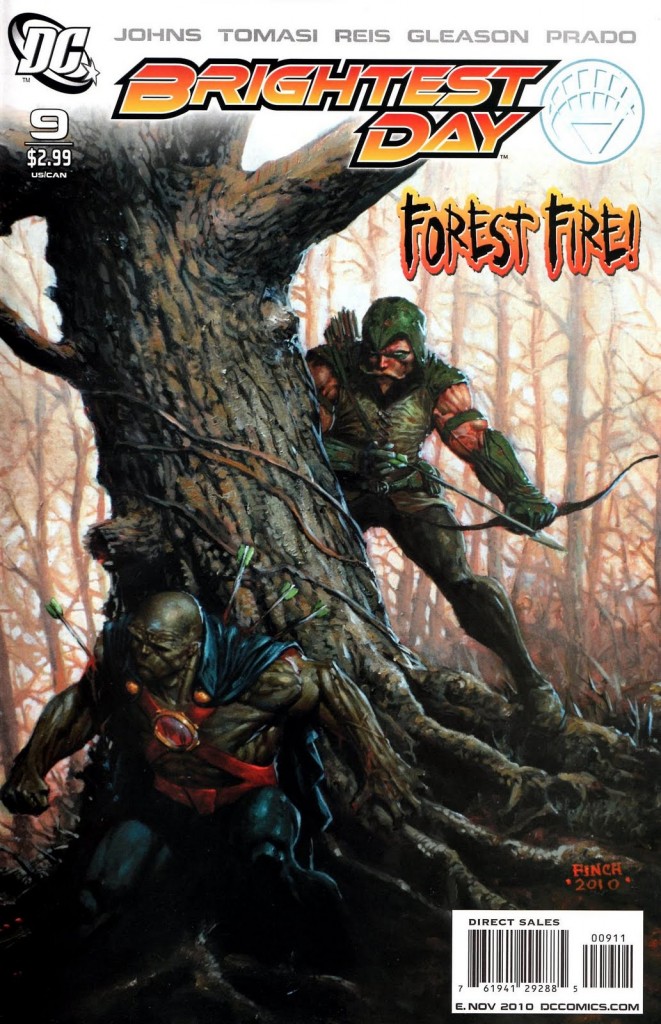 After a very brief hiatus in the wake of the pandemonium that was Fan Expo, I’m back again just in time to take another look at Tomasi and Johns’ Brightest Day maxi-series. Has the series kept its momentum after solid back to back issues? 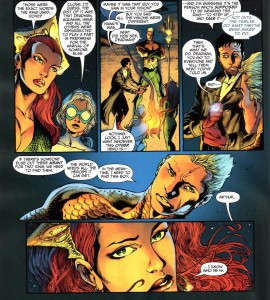 In the wake of Blackest Night, 12 heroes and villains return from the grave. After expansively searching, it’s revealed that these individuals have a role to fulfill if the chosen one is to be found. Brightest Day follows these heroes as they grapple with their renewed purposes and the weight that walks parallel to their destinies.

The issue begins with Aquaman and Mera swimming through the Atlantic Ocean, where Boston Brand and Dove appear. Despite asking to be taken to Hal Jordan, the white ring instead brings the ivory couple to Aquaman and Mera. It appears that the African-American boy named Jackson we’ve seen periodically throughout the series has a larger role to play. It’s their job to find him.

In the following pages, we see Jackson sitting on the porch of his parents’ home, gazing deeply into a ship in a bottle. The weather strangely picks as the skies open up into a downpour. The boy appears to have a mastery, or at least an ability to manipulate water. His eyes begin to glow blue, and on the next page his powers reveal themselves. And his hands are webbed, apparently. After he lets loose, his father comes outside and tells him it’s time he knows the truth about who he is.

After these scenes, we see Martian Manhunter flying over the forest in Star City. He touches down and immediately his powers go bonkers. He lets out a powerful blast into the tree canopy. Elsewhere, the other green martian strolls through a shopping centre, after considerably massacring everyone in the mall. 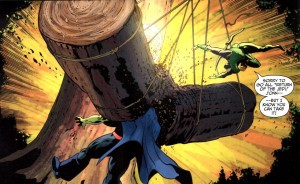 Back in the forest, Martian Manhunter’s powers continue to be out of control. After leveling part of the forest, Green Arrow arrives to put a stop to it. Well, he tries to. Ollie soon realizes it’s his friend, and pulls back. Manhunter moves towards the tree with the white lantern insignia on it and begins to embrace the tree, and by extension life and death if we pay any attention to the white entity’s message.

J’onn is shown a vision of Mars, where he fights the other green martian on the planet’s surface. It appears they share a psychic connection, and a love for Choco cookies. Progressively destroying the forest, Green Arrow takes measures into his own hands and unleashes a trap he designed to protect the tree. After Martian Manhunter gets smushed by two large tree trunks rigged to swoop down from the canopy, he comes to his senses and they leave the forest. Martian Manhunter explains everything he’s experienced, and after a short conversation, leaves Ollie to his forest.

In the final pages, we’re brought to Amnesty Bay where Black Manta is looking for Thomas Curry, Aquaman’s son. He’s quickly interrupted by Siren and her platoon. A short battle ensues, which ends as the issue does, with an apparent alliance in the making. 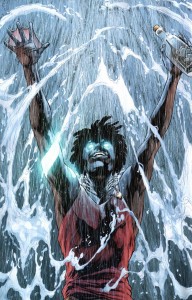 There’s very little to comment on in this issue where the art is concerned, primarily because there are only two story focuses in the issue. The Aquaman art is still very solid, using some nice illuminating effects on characters’ faces to highlight their features. The best work though is saved for both the scenes with Brightest Day’s worst kept secret, Jackson, and later in the issue where Black Manta goes toe to toe with Siren and her platoon. Concerning the former, I liked how Jackson’s ability to control water was indicated by the spiraling water around his arm and soon enough his entire body. The final page featuring Jackson looked really cool, as his eyes glow blue and the water contorts at his command amidst the continuing downpour. In the latter case, we get to see a real cool looking fight between Black Manta and Siren’s men. Similarly occurring during a downpour, Black Manta takes out two of her men in visually stunning fashion. This artwork continues to impress across the board.

The Martian Manhunter artwork though is less stunning. Previous criticisms aside, I did like some of the things done in this issue. The scenes depicting Manhunter’s shapeshifting powers going out of whack were pretty cool, as well as the panels where he’s embracing the tree. I especially like the scene where his psychic connection to the other green martian becomes clear. Just to see that struggle inside their minds split down the page was pretty cool. I’m still not high on the character models nonetheless. 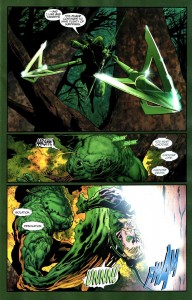 Considering I’m not a fan of either Aquaman or Martian Manhunter, this issue did little for me as a reader. I’m not that interested in either story, especially since the big plot point in Aquaman’s story was spoiled months ago in previews. It’s not a good way to hook readers when you’ve already given away your plot. I do like the apparent alliances that are forming within the Aquaman story, and I think they can add to the story. The problem is, there’s nothing really interesting about the story,

or captivating about the characters. There’s a slight twist in the addition of Siren to the mix in conjunction with Mera’s revealed history, but other than that it’s much of the same.

Overall the issue was a letdown, which was expected after the blockbuster issues that preceded it. I wouldn’t have used these two stories together in one issue, because I don’t think there’s enough there to carry an issue, but that’s purely subjective as I’m not really a fan of either character.

The book’s structure is still maintaining itself. After several issues where it was a disorganized mess, Johns and Tomasi have continued to follow the basic structure of beginning and ending with the same story, and sandwiching the remaining plots between it. As I said though, I wouldn’t have used these particular stories to focus an entire book on.