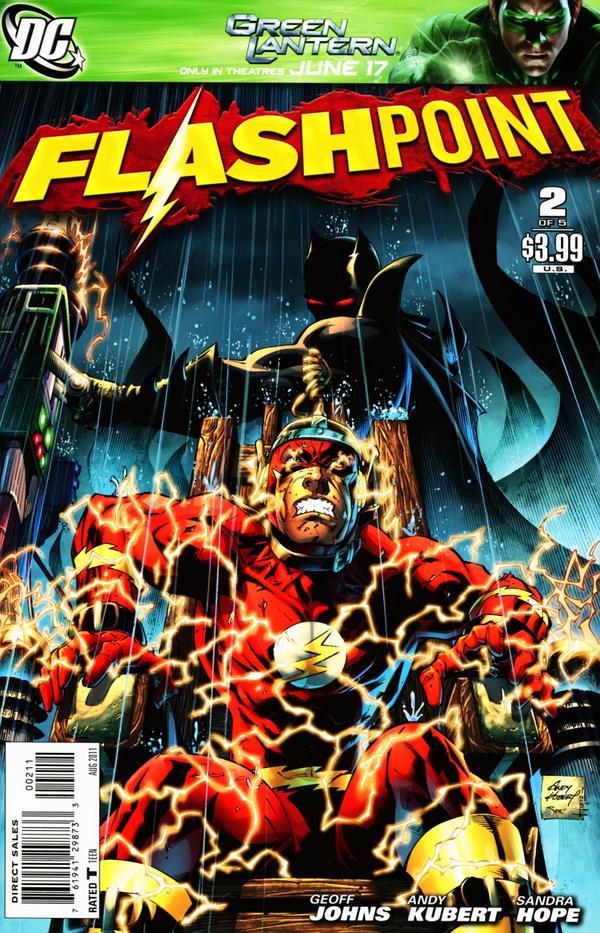 We’re back again this week with the other major comic book crossover offering this summer, Flashpoint. This week Flashpoint and Fear Itself both saw releases so it only seemed fitting to look at them both. Here…we…GO!

In a flash everything changed, and not just Barry Allen’s life. The world changed. Waking up to what seems like a dream, Allen quickly realizes something is wrong and he begins to investigate what’s happened and who’s responsible. Allen visits the one place he knows he can find answers, but another surprise awaits him in the depths of the Bat Cave.

On a ship sailing the seven seas we find Deathstroke, who’s a pirate, sailing deep into Atlantean territory near Paris. His ship is boarded by Aquaman who quickly attacks him and orders his brother to take no survivors as they attack Slade’s crew. Back in the Bat Cave Barry tries to explain to Thomas Wayne how he knows about Bruce, coming to the conclusion it was Bruce and Martha who died in the alley that night while Thomas survived. After further interrogation, Barry tries to explain to Thomas what he believes happened and who’s responsible for it. His memories begin to shift as his brain realigns according to the changes Zoom made to the time line. Thomas Wayne gradually comes to believe Barry, and agrees to help him on the notion doing so will ultimately save Bruce’s life.

In London, the Amazons are attacked by Steve Trevor, but he is subdued by Wonder Woman who uses her lasso to uncover Trevor’s mission to find Lois Lane. It’s revealed the Amazons have an informant among Cyborg’s ranks, and they decide to find Lois, while Trevor’s fate is left undecided for the time being. Back in Gotham Thomas Wayne helps Barry prepare an identical experiment to the one which gave him his powers. After preparing the right chemicals, Barry hooks himself to electricity conductors to attract lightning. Lightning strikes again, but Barry is badly injured in the process.

Kubert’s pencils are delightful in this issue. Each page is nicely detailed and flows together quite well. I enjoyed looking at the early Bat Cave pages with Allen and Wayne, with each successive panel of Thomas Wayne’s torturing of Allen captured in Kubert’s pencil work. Another great page is the split page featuring Allen’s two sets of memories. It’s here where Allen begins to realize how much of the time stream Zoom has changed, and not only does Johns’ writing disclose this but Kubert’s art highlights it along with Sinclair’s colouring. I also enjoyed the Amazon pages which were nicely dissected to create small freeze frames of each moment of action. As an example, on one page as Trevor looks up at Wonder Woman and tells her Lois Lane is one of the most beautiful women he’s ever seen, Wonder Woman’s face is reflected in his eye. In turn, in the next panel we see an awestruck Wonder Woman simply gazing longingly down at Trevor. Kubert’s best work comes at the end outside the Wayne mansion. Aided by Sinclair and Hope, the three artists pull together a dark, dreary, rainy, moody atmosphere reminiscent of a mad scientists’ lab. I loved the pouring rain upon the landscape, the streams running down their faces or bodies, the crackling thunder and lighting around them. Finally, Allen’s experiment is nicely done, while the final page itself is gruesome beyond words.

With two issues down in the mini-series, I’m not clear on where Johns is heading with this story. All that is clear at this point is that Zoom is responsible for the time stream changes, while Barry Allen will do everything in his power to stop Zoom from causing further damage. However, we’ve yet to discover the motivations behind these actions and with only three issues remaining in the mini-series, all we know thus far is that the time line is messed up and nothing is what it was. The story feels convoluted at this juncture, surviving alone on successive moments that don’t feel as though they’re leading anywhere or are perhaps playing out elsewhere amid the droves of Flashpoint tie-ins. If that’s the case, if we learned anything from Final Crisis, this is no way to tell a story. While the first issue was promising and accessible, I don’t know that the momentum was maintained into the second issue. There are still interesting plot points that can play out and I’m interested to see how this all reconciles by the end of the series, but this shouldn’t be mistaken as being a well plotted story. At this point I’m not quite sure where it’s all leading or what’s going on, but I feel like it’s worth your cautious attention all the same.