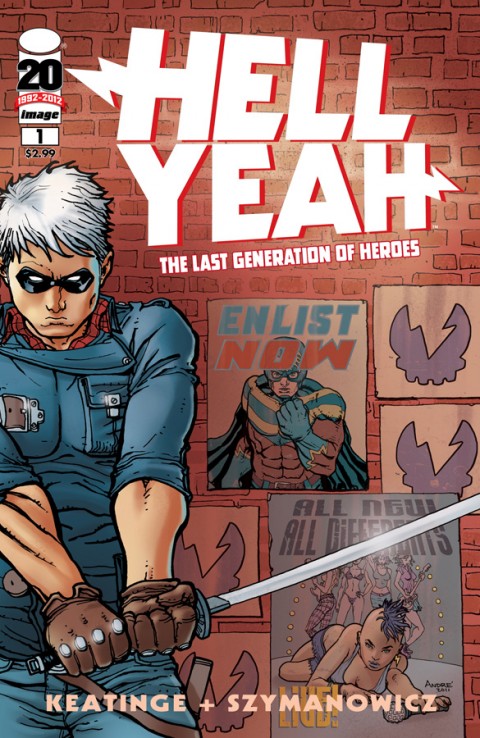 After 80 years it’s difficult to put a new twist on the superhero genre of comics, and yet that seems to be what Keatinge and Image Comics have attempted to do with one of their latest releases, Hell Yeah.

The story focuses on a young man named Ben Day. The son of a marine from the first Iraq war, Ben is enrolled in a college specifically for individuals with superhuman abilities, although how Ben came to possess these powers wasn’t highlighted in the opening issue. This first installment worked to establish the framework for how this universe operates by chronicling the history of superhero activity and the heroes’ attempts to improve the standard of living for people across the globe. With the connection between Ben and these heroes not yet revealed, much of the issue focuses on establishing the relationships that matter to Ben, namely that of his friendship with a schoolmate named Sara, as well as his father. His mother, who was presumably a superhero, is not seen in the issue although what is known is that he healthily fears her.

Hell Yeah‘s first issue also works to establish a generational “torch passing” or assumption of responsibilities between generations of heroes and would-be-heroes, evident in the work laid by their forerunners and their education at the superhero college, Kurtzberg University. The prestigious nature of the school implies some sort of social intervention of the societal whole into the production of superheroes, treating it almost as a religion unto itself not unlike a separate school system teaching a specific faith. It’s an interesting take on the development of superheroes, leaving open the possibility for the “bad eggs” to fall through the cracks of the system, creating more of a realistic, alternate view on the creation of the super villain in opposition to people acting villainous simply for the sake of being antagonistic. It grounds the book in a way that differentiates it from other superhero books by normalizing the story by rooting it in the familiar facets of socialization, but dressing it in a cape and tights to create a solid comic book story founded in that premise.

This series, as an underlying objective, feels primed to explore the nature of what it means for a young man to become a superhero, accomplished through three instances of potential heroism. First we find his father, Sergeant Daniel Day fighting overseas in Iraq for his country, struggling against uncertain odds as a P.O.W.. His father displays his bravery in his refusal to not surrender, until he is rescued by super-powered people. The second instance displays the good deeds of the heroes and their search for acceptance into the social caste, while the third implies Ben’s importance in the greater context of saving the world in the present when three female warriors appear at the end of the issue and assert their pleasure in finding him, citing that he’s dead in every other dimension they’ve travelled to. Despite their clearly being some form of rebel faction, the three examples are all off-set by the reality that Ben Day is still a young man trying to find his way, while trying to juggle life, his parents’ lineage and the pressures that accompany those trials. It’s an intuitive take on the genre unlike most, with the potential ever present to further peel back the layers on the question of what it means to be a superhero. While the traditional elements are in place such as the possible love interest and the classic directionless, albeit young man aiming to find his way, Keatinge’s story is a fun, engaging read which prods at the greater questions the genre poses that all too often are left unexamined. In Ben’s words, he is not a superhero, and it’ll be fun to watch his development as the character moves further in that direction with each left-cross.

Accompanying Keatinge’s plotting is the great art of Andre Syzmanowicz. Each page from the front cover to the final page features fun artwork, from the cool cover featuring Ben holding a katana blade while wearing a domino mask to the emphatic introduction page three pages into the issue displaying Ben socking a thug in the mouth with a violent left-cross while proclaiming, “ka-pow, asshole.” Both pages are very action oriented to degrees, with the former depicting him in a cool pose versus the outright violence of the intro page. It isn’t all violence mind you. Despite a panel showing an Iraqi’s head exploding into little pieces of bone and flesh, the book’s more finely tuned moments really strengthen the issue. The transition between Ben’s meeting with the Dean of his school to the recollections of his father in Kuwait are artistically seamless, and are also nicely differentiated in their colouring; the preceding pages are presented in full colour while the the flashbacks are in complete black and white save for any gore. There are several other instances of similar techniques throughout the issue, many of which occur during the Sara-Ben interactions. These were much more subtlety done, where the art clearly depicts Sara as having something of a solid crush on “Mr. Day,” while Ben, for his part appears completely oblivious to this fact. Still, the interactions between the two characters set the relationship in place, and it’s one that appears genuine. The Sara character is a nice foil for Ben’s antics and Syzmanowicz did a great job playing their emotions off the other by visually representing their mannerisms in how they interact with one another.

Hell Yeah was a good read, and another good “number one” from Image Comics. Keatinge has a very good concept on his hands with this book, and its potential for success is very high. Its story is very much centred in the superhero comics we’re familiar with on the conceptual level, but it actively branches beyond those confines and explores another facet of the comic book reality. It’s a very engaging read, one that’s accompanied by equally impressive art. In a genre hard-pressed for new ideas, Keatinge somehow found a layer to peel back to reveal a potentially very good story.