With the final pages of my submission idea complete, it’s time to send my little ‘snowball’ off to Hell – and see what kind of impact it has on the fiery landscape that is graphic publishing.  The end product is fairly pleasing to look at though, it’s not without its faults – knowing what Chris Ryall, (the Chief Creative Officer at IDW) suggested at the London Super Con… I’ll be lucky to receive any advice at all on my pencil style and level of detail.  The idea in itself could  be an interesting story… if there was ever a real life chance to flesh it out and develop the characters.  At this point I’d just be happy with an acknowledgement of receipt, I’ve learned so much from this project – new tools that I can bring to the table for the next project… so, I’m happy either way.

While this is a pencil submission, I also wanted to volunteer a story that could be engaging if the right time and effort is applied.  A dark and slightly crazy man believes himself to be a Jedi in every sense, though he clearly isn’t.  His plan is to assassinate Lord Vader, something the Jedi would not condone directly.  In hatching his master plan, he’s also developes his own form of lightsaber which – behave like ‘nun-chucks’ in close combat with the light-blade attached to the handle by titanium wire – which allows him to swing the Lightsaber in multiple directions.  This, again isn’t something the Jedi would allow since it wouldn’t result in the graceful and respectful close combat that a sword weapon would.

The idea of a slightly crazy man with good intentions at his core, whom IS capable of incredibly dark things… and completely believes them to be for the ‘greater good’ – is interesting for sure.  He’s clear on being a Jedi as opposed to a Sith, but his mindset and philosophy is ‘derailed’ from the core beliefs of the Jedi – though, they do run parallel.  This frees up the character to be allot more sinister in his behaviour but, you would absolutely be rooting for him. 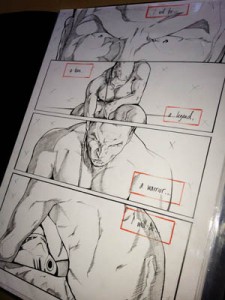 The 9 pages I’ve created to submit, show our (still nameless) lead character declaring to himself that he will be “A hero, a legend, a warrior…” he goes on – “I will be a Jedi.” At which point we see him in full Stormtrooper dress (minus his helmet) which immediately puts the character in a well defined pocket of ‘wrong’… with a good heart – or, at least it does to Star Wars fans.  The written story is a direct narration of his plans to “destroy the darkness.” and the panels that accompany the story show him working in (or infiltrating) the Stormtrooper army and being in direct contact with his sworn enemy… Vader.  The story of how he would actually achieve that -could be interesting in itself.  How would he operate in a large Army claimed by the Dark Side – originating from it’s clone base – and then expanding out as The Stormtrooper Corps after Palpatine allowed the addition of recruits and conscripts alongside the clones.

With limited dialog from Vader and his commanders we learn that Vader is spending some time on finding Obi-Wan following their clash at the end of episode 3, Vader takes a small team down to a quiet moon in distant corner of the galaxy (sensing a disturbance in the force), a small team that our lead character manages to volunteer for – and upon reaching a quiet space, he realises… his chance has arrived and he must take it.

The final pages of the submission are full-page-splash and show the reflection of our ‘hero’ in Vader’s’ helmet, with the final page showing our hero rushing toward Vader with his glowing lightsabers swinging in full attack, having slaughtered the other troops and his hurried journey from the Tydirium. 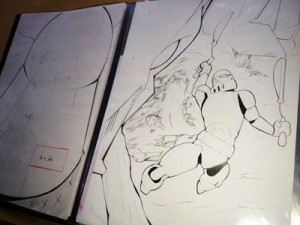 Another interesting addition to the story would be a greater plot to assassinate all the leaders of the Empire – and how we might achieve that in one hit.  The series would (obviously) either need to end in failure for our hero, OR it would need to be a kind of… ‘what if’ alternate timeline (of he were to succeed).

I’ve packaged the submission in a page-turning folder – and will detail the idea behind it all in a brief note to the recipient.  I shall also add some copies of artwork from other projects… and then I’ll cross everything and hope for the best.