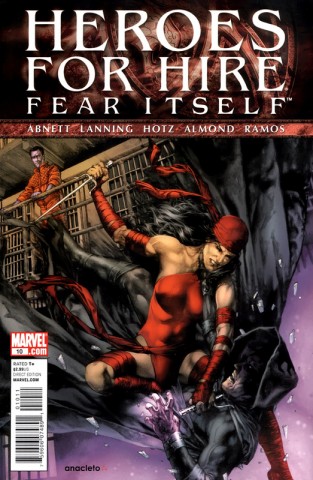 For our second review this week, we’re looking at the highly acclaimed Heroes for Hire. Now tying into the Fear Itself mini-series, Misty Knight’s band of mercenaries are doing what they can to protect the streets and not lose their payment. It’s surely very admirable. Onward!

The hammers of the worthy have plummeted to the earth, with each recipient now serving an ancient god of fear. One of these hammers arrived in the hands of Ben Grimm, better known as the Thing. Now an unstoppable abomination, Thing rampages throughout his neighbourhood while former prisoners of the raft run loose–among them the fear mirroring fiend known as Monster and Purple Man. The only thing standing in their way? Paladin, Gargoyle, Shroud and Elektra.

Shroud and Elektra stand alone among a rioting band of Raft inmates, all influenced by the mind manipulating villain known as Purple Man. With their backs against the wall, Elektra finds it typically difficult to not kill the inmates, which Misty reminds her of before being socked across the face. Shroud blankets the room in darkness, giving he and especially Elektra an advantage against their foes. The duo quickly and easily dispatches their quarries. At the command centre, Misty watches on as Washington and San Francisco are overrun by The Worthy. Paladin is finally able to check-in, but reports that Yancy Street has been leveled by the Thing. After a brief discussion on what to do next, Misty agrees to join Paladin and Gargoyle on location. Meanwhile, the two move forward down Yancy Street, spreading out to cover more ground before Gargoyle is turned to stone by an unknown entity. Paladin runs back to him to find him kneeling and begging for mercy, only to meet a visage of his worst enemy: himself. He’s quickly beaten down, and we quickly discover Monster is responsible for their defeat. Back on the raft, Purple Man tires of Shroud’s cloaking and forces him to let his guard down, while encouraging Elektra to put one of her sais through his throat.

I really enjoyed the artwork in this issue, which I felt was really fun in a weird, chaotic sort of way that maintained a high attention to detail. The skirmish inside the raft between Elektra, Shroud and Purple Man’s mind controlled lackeys was especially nice, notably the pages where they fight in complete darkness and devastate the inmates. I particularly enjoyed Elektra’s panels where she displays her martial arts training through an array of punches, elbows, kicks and flips until not one inmate is left standing. The Paladin-Gargoyle work is a little spottier though. Although I liked the great scene of the two heroes standing on a building’s rubble overlooking the city block left devastated by the Thing, Hotz and Ramos came together to present Yancy Street as a completely destroyed mass of smoke and rubble as silhouettes of people struggle to navigate the wreckage. I liked how Hotz switched the perspective from the top panel to the bottom panel, beginning by first showing us the devastation and then showing us their reactions, although I think the page would have had greater impact had the panels been reversed or perhaps move the top panel to the next page and make it a two-page spread. The rest of the Paladin-Gargoyle scenes up until the Monster pages were lesser in impact and intrigue, while the revelation of Monster as being responsible for their beatings and seeing it glowing a yellowed green was truly amazing to look at. Ramos did a commendable job colouring it, as did Hotz drawing it. The artwork was very good, although not compelling in stretches. I feel like it did an adequate job of telling the story, but some of the panels could have been arranged better to complement the story more than it did.

The series has greatly improved since I last read an issue, however I suspect that has more to do with its tying into Fear Itself than being a nod to its own storytelling. Much like the other tie-ins, this book focuses primarily on one of Marvel’s heavy hitters after their acquiring one of the worthy’s hammers. In this case, Thing poses some problems for his former comrades as he destroys an entire city block. It’s a tired element that’s too similar to the other books, leaving this book hardly in a position where it stands apart from the books on the shelf, let alone those carrying the Fear Itself label. The book’s cast of characters hinders it a little, and although I enjoy seeing Elektra in any book, she’s miscast in this series while the others are of little consequence in the larger Marvel landscape. There’s very little here that kept me wanting to turn the next page, and because of that I had a hard time getting into the story, although the prologue page does a good job of bringing readers up to speed. It’s hard to assess this book as it’s solely a tie-in, so perhaps another look post-Fear Itself is in order to fully grasp where Abnett and Lanning are taking the book moving forward.