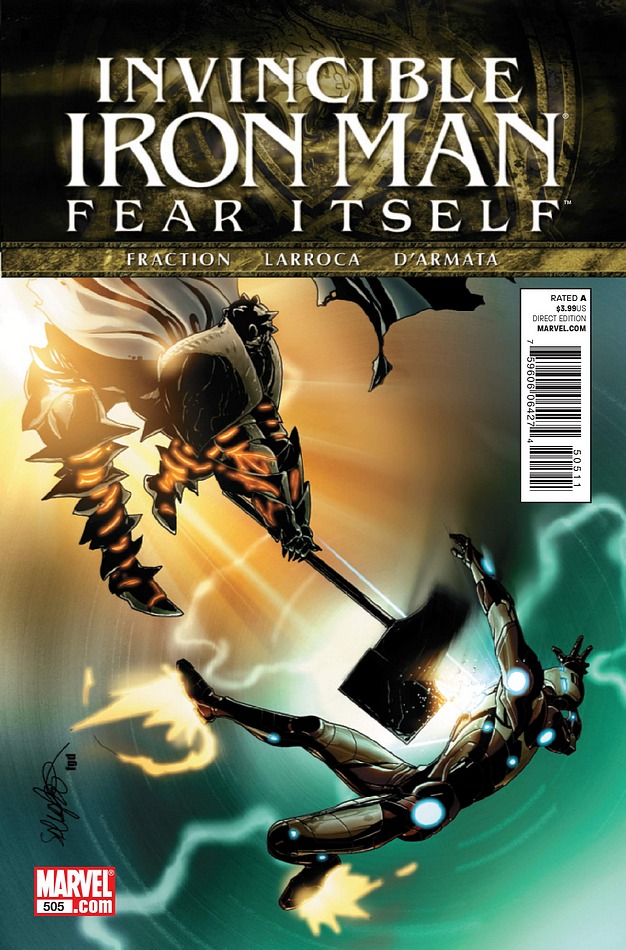 Fear Itself continues this week with the second part of a story centering on Iron Man’s struggles against Grey Gargoyle, who is now in possession of one of the Serpent’s mystical hammers.  Read on, true believers.

Fear reigns and some of Marvel’s physically strongest characters now carry mystical hammers, using them to strike fear in the hearts of their former allies. How can they stand to fight when their worst fears are coming to life? Even more, can they?

After a brief flashback to a conversation with his father, Tony Stark regains consciousness but notices quickly he’s resting upon an island of dead humans; each turned to stone by the Grey Gargoyle and piled one atop the other. Iron Man quickly rises to his feet only to see his transformed adversary closing in on his location. The two clash, but Iron Man is not a match against his godly foe. After sustaining a beating and losing more of his comrades, he uses his repulsor ray to create a sword which is able to damage the transformed Gargoyle and quickly retreats. Stark arrives at his office where he meets Pepper Potts and Bethie. Iron Man leaves them behind after telling them he has to go patch up his suit and meet with the other Avengers.

I felt like the story was methodical and contained, but altogether short with very little transpiring in the issue. Much of the book centres upon the fight between Grey Gargoyle and Iron Man, and all it really drives home to me as a reader is the direness of circumstance this story is defined by. If the greater story is dependent on the concept of raising the God of Fear and anchoring it with its own unbeatable acolytes, this book is nothing more than a supplementary work that emphasizes the primary directives of the plot. In this, the book was successful in communicating the reasons to be fearful if you’re a character in the Marvel universe.

Larroca’s artwork was solid and dynamic, complete with finely detailed pencils. Larroca did a nice job of drawing Stark in the early pages as he pulls himself off the ground to realize he’s standing atop the bodies of the dead. His shading of the petrified stone characters as Stark stands highlights the terror characters face in this specific comic. On the same page, we see Gargoyle in the foreground with Stark far off in the distance as a small shaded character standing upon the same mountain of bodies. I also enjoyed the panel in which Gargoyle quickly turns his head and lunges at Iron Man. The following page offers full throttle action as Gargoyle approaches Iron Man for round two, swinging his hammer at the island of bodies and shattering them into a shower of stones. At the bottom of the page, Iron Man unloads his best weapons in a fantastic display of aggression. This page was altogether wonderful, brought to life by D’Armata’s colouring work. The team offers some other great work towards the middle of the issue when Detroit Steel arrives on the scene to try and save Iron Man. The entire page is wonderful, as is the the majority of the issue.

Issue #505 of Iron Man was a solid comic which completed its task of complementing the greater story of Fear itself. As a book on its own, very little happened within it beyond highlighting another piece of the greater puzzle as the main mini-series pushes forward towards the next issue. I felt like the artwork was the strongest part of the issue, with the story somewhat lagging behind in its overall depth and quality. This book is very little beyond a tie-in to the main story, meaning we can very well deduce what will happen throughout the issue based on what story premise has been established with Fear Itself, inching forward as the main story progresses. With that piece of the story established and being thread through the other books, the stories are quite predictable which I feel draws away from the story and overall reading experience.