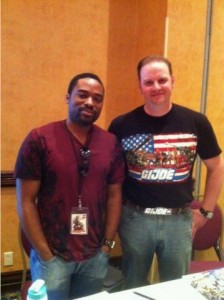 This past weekend was the 2011 Canadian G.I. Joe Convention in Toronto.

One of the special guests was comic book artist Valentine DeLandro.  I got the opportunity to sit with Valentine and talk to him about comics and of course G.I. Joe.

Ed (E): When was that point when you decided you wanted to be in the comic book business?

Valentine (V): When I was in journalism school, I started to miss drawing.  I was drawing for the majority of my teen years and through high school.  I went to a high school that specialized in visual arts, so doing that and taking away from that and writing, which I also enjoy doing, but I like doing art more.  If push came to shove, then that would be the one.  So it was sometime in university, that’s when I realized I really wanted to pursue this, and try to figure out a way to do this.  I knew that meant going to a lot of conventions, getting portfolios together and meeting editors, and getting turned down by editors, and picking yourself back up.  There was a lot of that.  It was some time around there that I realized this is what I wanted to do.

E: You live in the Toronto area?

E: What is it like living up here, but mainly the business is in the States?

V:  It’s better now with how much the publisher’s are relying on the internet, and just communicating digitally these days.  Beforehand it was trickier.  There was a lot of Fed Ex’ing going on.  When I first started, people were shuttling boards back and forth, to get them inked and stuff like that.  It did make it seem much more of an advantage being closer in the States.  I guess it would be a little easier transporting material back and forth. Besides everything is going digital, not much of a difference.  That’s why a lot of the publisher’s are reaching out and looking out for talent in places they probably weren’t looking before.  Especially over seas in Europe and other countries instead of North America now.  It’s great, it’s a great thing for the industry, I think that they are getting past borders, and branching out, there’s a lot of talent out there.  So it’s a good thing for the industry, it’s keeping it healthy.

E: How many kids do you have?

V:  I have one and, another on the way in November.

E:  I have three kids myself, and the business I am in, I have to juggle work life and family life.  Is it tougher having a family and being in the business?

V: It’s tough, I wouldn’t say it’s tougher than anybody else trying to raise a family and work.  It is work ultimately and that is the best way to approach it.  As much as I love this and as much it is a passion, I have to step back and say this is how I am providing for my family, and this is how I am putting food on the table.  The best way to approach it, is treat it as a 9 to 5, even when my hours tend to stretch past 9 to 5.  You have to find that balance.  I want to spend time with my family, and watch my daughter grow up. It’s tough sometimes.  You have 3 kids, I’m sure you know how difficult it could be, to have to do work, when you would rather just spend time with your family instead of work.  It’s finding that balance.  I’m still trying to find it, and come November (when his second child arrives) I’m probably going to find it again.  It’s going be interesting.  It was a bit of an adjustment, when my daughter was first born.  A lot of books were late around that time.  Everybody goes through it.  Everybody struggles.  I don’t think my situation is any different.  It’s not better or worse than anybody elses.  We don’t have much of a choice otherwise.

E: Who are some of your biggest influences on your work?

V: That is a very long list.  I grew up, as far as comics go, really into Super Hero stuff, leaning more towards DC stuff.  Mainly Jerry Ordway, John Byrne and Garcia Lopez.  Then I started shifting over to Marvel stuff, not because I preferred one over the other. My introduction to comics was through cartoons.  I grew up watching Super Friends and Spider-Man.  Spider-Man was the only real introduction to me, as far as the Marvel stuff.  I always loved the Spider-Man stuff.  The Ditko’s, the Romita’s, that is the stuff that really influenced me.  There are so many.  I am leaving people out, if this was a different day, I would have a different list.  They are the guys I first remember following, wanting to pick up their books.

E: When we talked at ComiCon (Fan Appreciation Day), you said your Mom gave away your G.I. Joe collection.  Since  we are here now, what is your favourite G.I. Joe memory?

V: Growing up, my favourite Joe memory was collecting them with my friends.  We used to collect them as a group.  One friend would have certain figures and they would bring them over.  And you would complete the set.  I had two friends that I used to hang out with a lot, who used to collect Joes.  We tried to keep them pristine and make sure all the weapons were there.  That is probably my favourite Joe memory.   Who doesn’t like that time?  All you had to do was pull out some plastic guys and play with them for an afternoon.  Then maybe take a nap.

E: How many did you have?

V:  Somewhere close to 25, 30 Joes.  I had something like 6 or 7 vehicles.  I had a younger cousin, who used to get more Joes, and toys in general than me.  We used to play with them all the time.

A big thanks to Valentine DeLandro.  I really enjoyed talking to him.  I turned off my recorder and we talked more about G.I. Joe and comics.  He was selling some pages from G.I. Joe Declassified and G.I. Joe Special Mission Brazil.  I purchased a beautiful page from him, from Declassified #3.  You can visit his page to check out other pages available for sale.