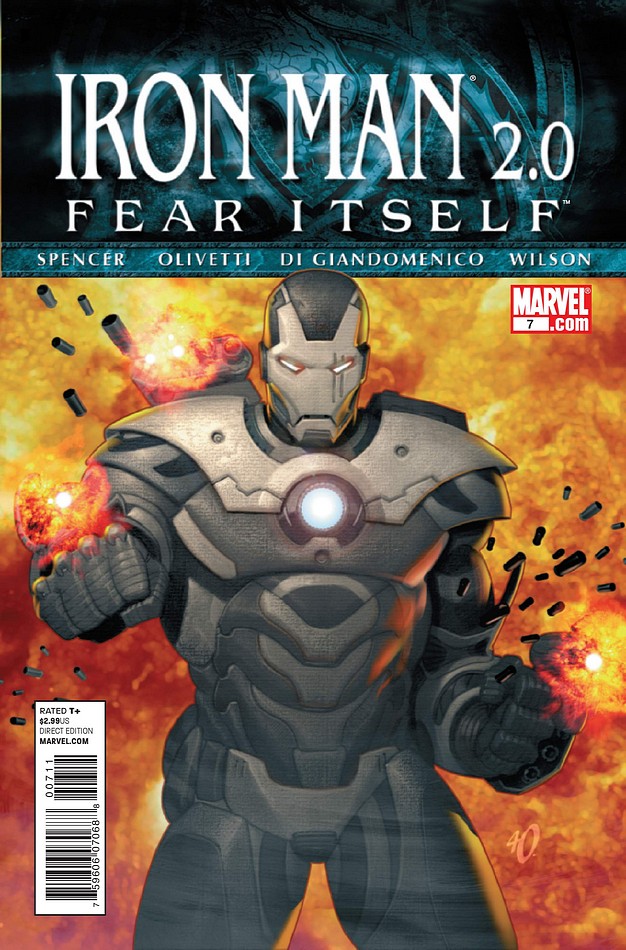 Fear Itself has taken the Marvel universe by storm this summer, and along with it, it’s consumed many of its titles. Iron Man 2.0 wraps up its tie-in to James Rhodes’ adventures,  an arc which included the Immortal Weapons of the seven cities and a little twist towards the end. Onward!

Hammers have fallen from the sky left and right, one of which lands in Beijing near Sun Wukong, the Monkey King. After failing to lift the hammer, Absorbing Man and Titania arrive to secure it. Soon after, the Immortal Weapons arrive after being summoned together to close the gate to the eighth city. Wukong awaits them as they regain consciousness, while James Rhodes struggles to understand why he’s there with them at all. 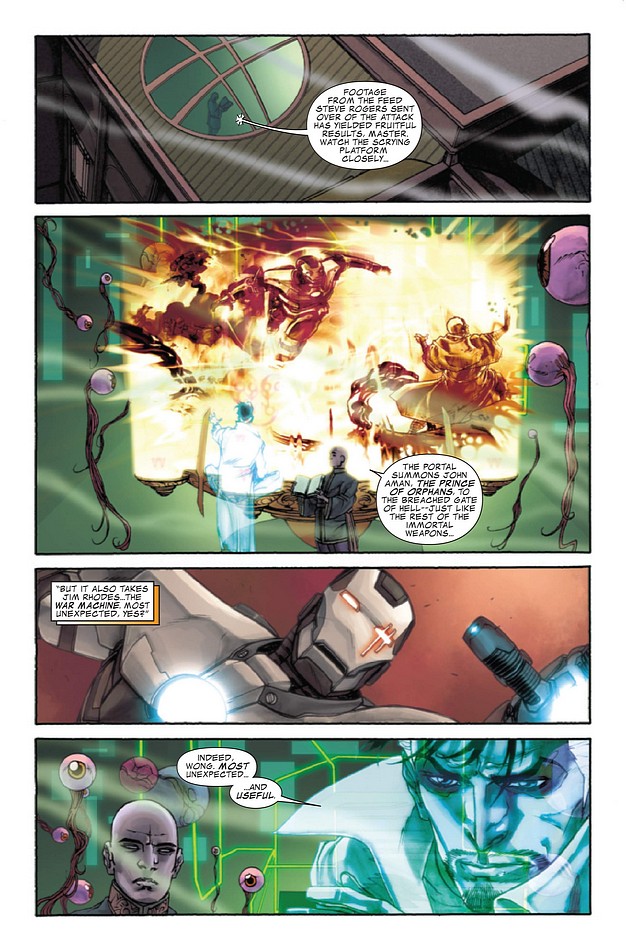 Scattered about a city block, the Immortal Weapons, accompanied by James Rhodes, come to their senses while Sun Wukong taunts them from afar. After a brief, but cryptic conversation with Wukong, he leaves while the Weapons refocus their attention towards the large gate and ensuring it will be closed. The Immortal Weapons decide to meditate and focus their energies towards this goal, but are interrupted by Danny who appears to be possessed by Agamotto. He unceremoniously defeats many of his friends until James Rhodes is able to interject into the situation and subdue Iron Fist.

In the final part of this Fear Itself tie-in, we find Rhodes again teamed with the Immortal Weapons to find and locate the hammer that had dropped into China. What they find however is something else entirely. I feel this issue did a good job of pushing the story forward, but the overarching connection to Fear Itself  was very loose in this issue, instead focusing more on the completion of the Immortal Weapons piece of the story rather than moving Rhodes’ story forward. The additional emphasis on this dynamic both takes the spotlight away from War Machine inside his own book, but also feels like it’s intended to set-up future stories for the Immortal Weapons, specifically Iron Fist. This three issue arc was okay, if not uneventful, but considering much of the story has shied away from the larger events of Fear Itself, the tie-in is only such in name.

I really enjoyed the prologue and epilogue pieces penciled, inked and coloured by Di Giandomenico and Wilson, which I felt was one of the artistic highlights of the issue. The spectral images of Dr. Strange watching the events unfolding in China through a magical window looked very nice and particularly well detailed. For his part Olivetti did a fantastic job as well, drawing some great panels such as the one early where the Immortal Weapons are sprawled across a landscape’s rubble. The photo realistic work contains several nuances such as stone columns having fallen on the heroes and obscuring their bodies in part, War Machine’s compartmentalized fingers folding around his head joint-by-joint, while the body language of the characters themselves is varied and unique depending on the piece of the environment they’re laying in.

Another page that caught my eye was the one where Prince of Orphans stands on a cliff with War Machine, gazing up towards the dimensional gate that threatens this plane of existence. The page’s composition highlights the immensity of the landscape, and more, the somberly toned concern that envelops the characters. In other instances, we can see the characters’ pupils when the panels are drawn into their faces as fully organic parts of their bodies as opposed to blank pieces of canvas, exemplified by a panel featuring Iron Fist as his will becomes compromised.

Olivetti’s work also lends itself to non-verbalized story telling. In one page where Sun Wukong introduces himself as the Monkey King, Olivetti draws a panel without any dialogue where War Machine just looks at Iron Fist, who simply responds by shrugging his shoulders. It’s as if he says, “it beats me.” Once he leaves, the group of Immortal Weapons plus War Machine share a laugh at Wukong’s expense, as both Fat Cobra and Iron Fist smile noticeably. I further enjoyed how Olivetti characterized Iron Fist’s bodily reactions to his possession, growing weaker and more compromised, thrusting his arm back as if to say, “please, stop. Don’t come any closer.” Altogether he does a great job of telling a story with his artwork that complements Spencer’s story.

I enjoyed the three issue arc, although by the end the Fear Itself label is very misleading. In that regard, the story is a disappointment for not really adding to the ongoing story happening throughout the rest of the Marvel universe beyond the first issue and part of the second. Moreover, it seems the events of this book will play out in other stories over the next few months, relegating this arc as sub-supplementary work for a greater story. If you grabbed this issue and expected a proper tie-in, you were probably let down. Regardless, the story was still good and, as I said, sets up some future stories featuring both the Monkey King and Iron Fist. The action itself was paced well, while the dialogue felt natural and was nicely complemented by the artwork. If you’re a fan of either War Machine or the Iron Fist/Immortal Weapons stories, you likely enjoyed this arc. Otherwise, much of what’s going on inside the front and back covers may be a little lost on you, making this not a very accessible book to some readers.