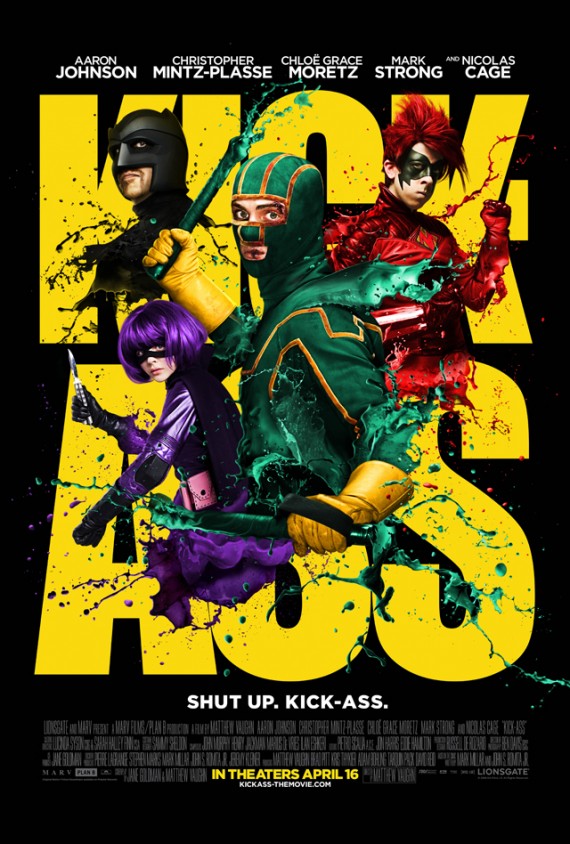 So it’s been a week and if your surfing this website, chances are you’ve seen Kick Ass.

Okay now it’s into your own damn fault territory.

Last weekend, I went to check out Kick Ass along with a bunch of other nerds.   I was the only one in the crew who had read the entire comic, Sean had read everything but the last issue, and the others hadn’t touched it.

I loved the movie.

It’s not as close to the comic as a lot of the reviews have said it is.

Not that that’s a bad thing…. let me explain.

From top to bottom, I loved the flick, it will  be a dvd purchase for me.  Aaron Johnson does a really good job playing over his head in a world of violence that he couldn’t have imagined.  I really liked Mark Strong as Frank D’Amico. Christopher Mintz-Plasse was a bit different then I was expecting but not really stretching that much.  It was kind of like McLovin in a leather suit. 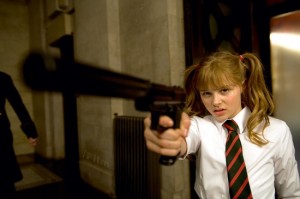 But it’s Chloe Moretz who steals the show.  Yes Hit Girl is just kind of an awesome character and it’s kind of hard to go wrong with it but Chloe brought a weight to her acting I didn’t expect.  Even Nic Cage wasn’t terrible.  I rather liked the fact that he kind of brought this weird stilted speech pattern whenever he was in the Big Daddy costume, like he was trying to do every super hero from the tv shows he had watched growing up, it was a really interesting character choice I would have never thought of.

In fact between this and Bad Lieutenant:Port of Call New Orleans, Nic Cage is starting to dig himself out of a creative rut.

Matthew Vaughn has done a great job with this film. While I’ve enjoyed his previous director efforts in Layer Cake and Stardust, I was a little leery.  Vaughn has been associated with two other super hero films in the recent past (X-Men 3 and Thor) and both of which he dropped out of last minute.  I’m glad to see he went through this one. 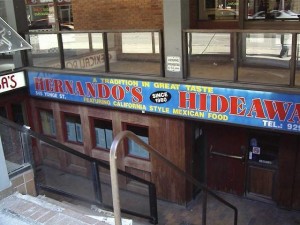 And as a side note, I loved the fact that Kick Ass gets stabbed behind my favorite Mexican restaurant in Toronto, Hernando’s (right by Yonge and Welsley, I highly recommend the Mexican Flag Chimichangas).

But as the second act started, I admit I was a little curious what movie my fellow comic reviewers and patrons had seen.  A number of reviews I had read before seeing the movie mention how close the movie is to the comic and while I will say say, in spirit, that’s true.  All of the major plot points are covered but there are a good chunk of changes made for a film audience. Kick Ass gets the girl, Big Daddy is not some comic nerd playing hero and Hit Girl’s mom is dead.

None of these bothered me mined you, in fact I’m happy Kick Ass got the girl in the end.  Lord knows that us nerds need a little bit of cinematic hope.  But at the same time, I can’t help but wonder what the reviewers meant.    Changing Big Daddy from a comic nerd who kidnaps his child to a rail roaded cop is a pretty major one.  But at the same time it’s kind of like taking the same trip by a different route. This may bother some (much like how the changes to Watchmen bothered a lot of people).

But as I said, the changes didn’t make me like it any less.  Although I still wish the Hello Kitty backpack flamethrower was in it.

Over all I highly recommend it.  You’ll be able to get a whole whack of opinions on it when my podcast TATANS airs our special Kick Ass episode next month.