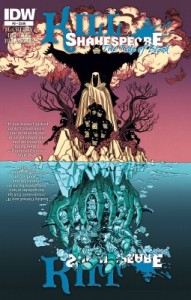 The Kill Shakespeare series — the original volumes and Tide of Blood — has made it habitual to grip, captivate and keep you thinking as a comic reader. Del Col, McCreery and Belanger’s one-two writing-artistic punch has yet to fail the team and that dynamic is still ever present in this second issue of the new volume.

Tide of Blood #2 follows the central characters — Juliet, Romeo, Hamlet and Othello — as they travel with the mysterious Miranda to the Island of Prospero to help her release her father from the evils that have overtaken him. As the group travels further inland, the island’s madness overtakes them and leads each down their own path towards insanity. Their madness envelopes them as they venture deeper into the island, leading to their separation with Othello, Hamlet and Miranda ending up elsewhere, while Romeo and Juliet find themselves alone in the forest after an attack from Caliban. The issue focuses on two primary reveals, specifically the unveiling of Miranda’s identity and the passion and love that enveloped Romeo and Juliet in the original Shakespearean play coming to light in this story. These revelations give the series an essential jolt in the arm, providing both a primary antagonist while giving the protagonists additional tension as it relates to the inevitable love triangle between Hamlet, Juliet and Romeo. 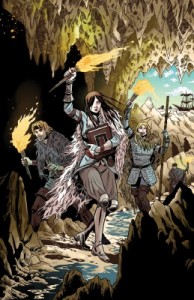 Andy Belanger’s knack for complementing Del Col and McCreery’s script with astounding visuals is ever present. His style creates a measure of depth across several pages, including the first page as the reader’s eye can follow the former Prodigals’ path from the exterior of a cave into the interior where Romeo, Juliet and Miranda stand in the foreground. Their trail winds behind them as Hamlet and Othello walk behind them, their silhouettes transfixed on the rocky wall as they follow their companions deeper into the island’s core. The artwork shifts a bit as the group becomes overwhelmed by the island’s madness, a purplish background emphasizing their insanity as their subconscious assaults their senses. Several panels are drawn, notably a host of group shots with the same purplish effect, highlighting their collective plight. Each character reacts differently, corresponding to their Shakespearean back-story, making each unique. He displays each astutely, making for a great series of pages. Belanger, who also provided the cover, executed the mirrored images two-page spread, matching Romeo’s movements motion for motion, and nuance for nuance. The pages represent the duality of not only the island but the inner turmoil within Romeo, which the island itself reflects throughout the entire issue. These two pages encapsulate that theme rather well. Belanger saves his best for the end of the book as Romeo and Juliet find themselves alone in the middle of the forest, embracing each other before kissing like long lost lovers, as we knew they would before long. The final panel on the page is one of Belanger’s best entirely because of its simplicity —  the expertly drawn, quiet image says everything it needs to say, and it’s a hallmark of Belanger’s work.

Kill Shakespeare at no point has wavered in its quality prior to this second issue, a trend that has continued with its release. The series has been consistently excellent, founded on the creative trifecta of Del Col, McCreery and Belanger — the three continue to offer twists and intrigue that spell the marks of a great comic. Kill Shakespeare: Tide of Blood is everything the original series was, only made better with the experience and evolution of the creators behind the title.