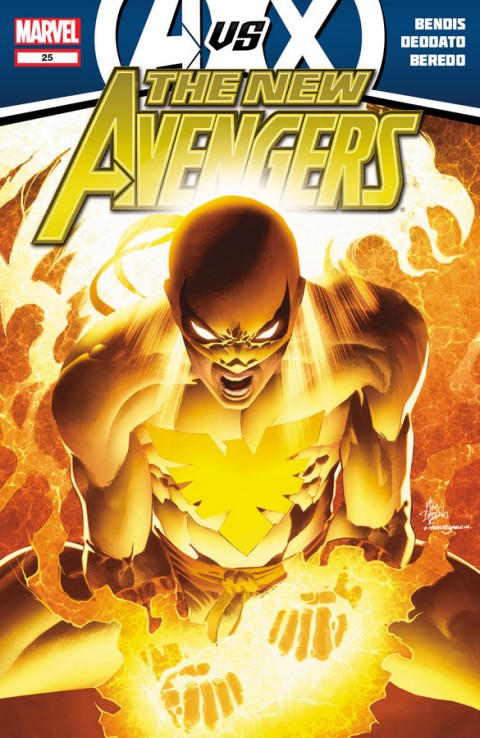 Artists: Mike Deodato and Will Conrad

Much like any other major company’s crossover event, there are always side stories intended for two purposes. First, they help enhance the main story by building upon elements in the primary plot line by using secondary characters to supplement the arcs and round out the total experience for readers. Secondly, cynically speaking, they are often ways for companies to bleed the bank accounts of readers dry on books which may not be worth their time otherwise. These tie-in books rarely ever rest entirely within either extreme, but it’s safe to say that all usually fit in somewhere between the two points. While the Avengers vs. X-Men event has begun to pick up momentum with the release of its second issue, we’re beginning to see events transpire elsewhere that complement the main story, such as the recent issues of Secret Avengers and Uncanny X-Men. Both stories addressed different facets of the plot, such as the struggle in space by the Avengers to stop the Phoenix from descending on Earth, while in Uncanny we discover the inner thoughts of characters like Hope, Namor and Colossus as the battle begins on the shores of their home. New Avengers #25 was a bit different from those books though, adding something very new, very different and something altogether intriguing as the crossover marches forward.

Like most crossover tie-ins, the focus of books tend to shift and adjust according to what the main plot demands. In this case we find Bendis focusing entirely on the mythology of Iron Fist, building upon the original stories and the more recent Fraction/Brubaker and Swierczynski Immortal Iron Fist series. Issue 25 is set entirely in K’un-L’un, split between two periods unevenly with emphasis placed on Master Yuti as he discovers a young red-headed girl destined to be both the next Iron Fist and host to the Phoenix Force in the past. In contrast, a single page features the miscast Yuti (still as K’un-L’un’s Master) and Lei Kung discussing the prophecy of the Phoenix and the tireless mission Danny Rand will quickly find himself embroiled in during the present. While Bendis successfully evolves the Iron Fist mythos, this minor mistake in casting Yuti as still being the Master of K’un-L’un departs from the established canon of the Immortal series. Despite this, the building of the mystical legends surrounding both the dragon Shou-Lao and the Phoenix Force itself and their apparent interwoven histories adds a level of intrigue as the greater story pushes forward, asking questions of us such as who the red-headed girl was or to what extent her experiences as an Iron Fist Phoenix had on the legend of the mystical city’s guardianship. The plot thickens more so at the end of the issue upon both seeing an ancient drawing on parchment paper of an Iron Fist battling the Phoenix, combined with the cover of the next issue which clearly shows Danny Rand protecting Hope.

If there’s one fault to be found in this issue, it’s simply the exclusion of all Avengers characters. Instead this issue feels like it could be issue 28 of The Immortal Iron Fist series. With its setting entirely in K’un-L’un, the necessary prerequisite of the Iron Fist legend’s foreknowledge could be a deterrent to enjoyment for casual Avengers fans. Despite Bendis’ minor mistake, the issue is a fantastic addition to the lore of Iron Fist. To that end though, the issue is very slow and plodding, functioning more as a set-up for things to come rather than any measure of entertainment for readers.

Mike Deodato, a longtime Bendis collaborator, continued his fantastic work on the series, pencilling breathtaking panels throughout the issue. The Phoenix pages displays his work at its best, combining what looks like a Jean Grey/Phoenix with Iron Fist garb; the cosmic forces or chi of the dragon Shou-Lao and the Phoenix intertwine and weave together amid a beautiful clash of energies leading to the red-headed girl’s erecting as a new force altogether, wielding both power sets. Will Conrad joined Deodato on this issue, offering artwork that closely mimics David Aja’s work on Immortal. His work captures the mystical tone and beauty of K’un-L’un while its colouring closely resembles other darker toned down martial arts comics which fits completely with the nature of the story.

While New Avengers 25 is a let down from the perspective of it not truly being an Avengers issue, the comic establishes a crucial piece of the Avengers-X-men story as it gradually unfolds. Bendis added more layers to this tale, apparently sliding the current Iron Fist into the role of Hope’s guardian while both sides are fighting over her life and what it means. This issue takes a step in that direction, showing the history of the Phoenix and the cosmic entity’s relationship with Shou-Lao, K’un-L’un and the Iron Fist legend. Considering the next issue’s cover, this appears to be a very important issue to the mythos of both characters, making New Avengers #25 a solid, interesting issue that appeals to Iron Fist fans and those looking to understand the greater complexities of the story; while admittedly falling short and potentially displeasing readers who bought it looking for Avengers related action.