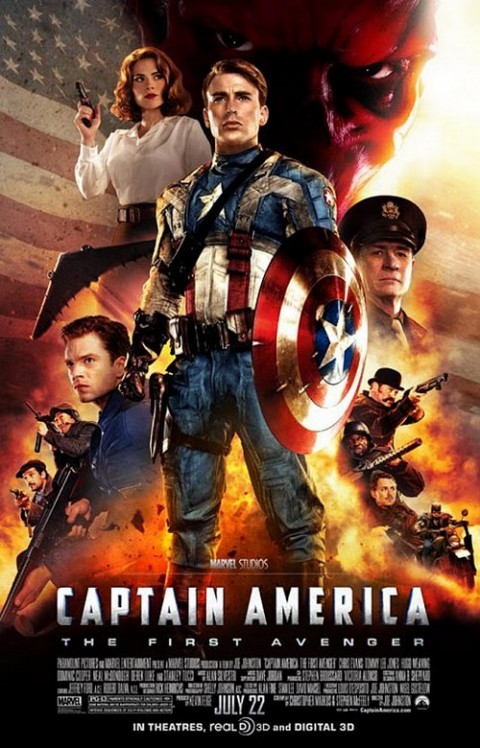 In preparation for the Avengers movie CBD is taking at look back at the films that led to this monumental cinematic occasion. This week the Road To The Avengers defrosts Captain America.

Anthony: This was my favourite of the 5 movies. Another rock solid cast, the script keeps the story moving, and they did a great job of capturing the essence of the comic book. There was a lot of critique on how Captain America was too one-dimensional a character, too good. Heroes that good just aren’t that believable. But that is the point. That is who Captain America is.

Leigh: It’s true Captain America is suppose to be the ultimate good guy, and agreed the cast in this is amazing! Although Hugo Weaving’s accent bugs the crap out of me, his amazing makeup/CGI as the red skull make up for it. Speaking of CGI I love the skinny version of Steve Rogers, they did a great job making him look small. It makes Chris Evans look much larger and impressive when they show him after the transformation.

Anthony: The special effects were great. The design was a perfect mix of old-timey sci-fi and lasers. I also really enjoyed the little additions that tie the entire Marvel Movie-verse together. Using Howard Stark, having the Stark Expo, talking about Odin’s treasure room, and the cosmic cube. It was a great way to get everyone psyched about The Avengers movie.

Leigh: I did like the tie-ins to the Avengers, they were more subtle than Ironman 2. I was surprised by their choice of the girlfriend character Peggy Carter, so far the girlfriend has been played by very high profile actors like Gwyneth Paltrow and Natalie Portman, but Peggy was played by the less known actor Hayley Atwell. Who, I think, was a great pick for the part because of both her talent and looks.

Anthony: The extra scene totally psyched up the fans. There was a total nerdgasm in the theatre. Say whatever else you want about these movies but Marvel and Disney have done a great job hyping it up and it is expected to crush records when it opens on Friday.

Leigh: It’s true! I know I’m excited to see it! I hear some cities are already starting to sell out tickets for it.

Anthony: There won’t be this much excitement for a superhero movie until Warner Brothers gets their act together and makes a JLA flick.

Well faithful readers that is all. 5 movies locked and loaded to prep you for the big blockbuster of The Avengers. Check it out this Friday and be sure to let us know what you think!