I have only read a few of the manga created by Natsume Ono.  My favourite and, in my opinion, her best manga is not simple.  not simple is about Ian.  He comes from a very dysfunctional family.  The only person who really loves him is his sister.  He has a horrible childhood yet he still has a child-like innocence when he’s gown up.  Unfortunately, he gets separated from his sister and, when he is old enough, he goes searching for her.  We do not directly follow him on his search.  We hear of his progress whenever he visits his friend in New York. 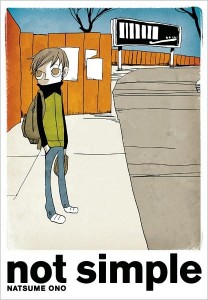 This story is not told in chronological order.  You see how the story ends and then see how it all began.  Sometimes, this method of storytelling feels gimmicky.  However, it works well for not simple.  The epilogue is more poignant because it is out of sequence.

What I liked the most in not simple is Ian.  He is very likeable.  I could not help but root for him and hope he finds what he is looking for.  Even though I knew how it ended, the journey to that end point is very compelling.  Knowing the ending does not ruin the story at all.

Natsume Ono’s art is very unique.  Her drawings are not very cartoony like a lot of mainstream manga.  It is simple and a bit rough.  I like it.

At TCAF, I asked Natsume Ono how she wrote not simple.  Did she write the story from beginning to end first and then carved it up?  She said no.  She actually had in mind of a scene that she thought would make a great beginning to a story.  That became the beginning scene for not simple.  Then she created Ian’s story from there.

Manga is more than stories about ninjas or lovesick schoolgirls and schoolboys.  There are very good manga out there for a more mature audience and not simple is a great example of it.  I highly recommend it.  Just read the prologue and you will be hooked.

For more information about not simple, go here.

not simple is $14.99 (USD).  It is an “indie” manga so you should probably call your local comic shop first to see if they have it in stock.  However, you can easily find a copy of not simple at your local library.  There are 10 copies in the Toronto Public Library with one hold on it.  There are 3 copies in the Hamilton Public Library with no holds.