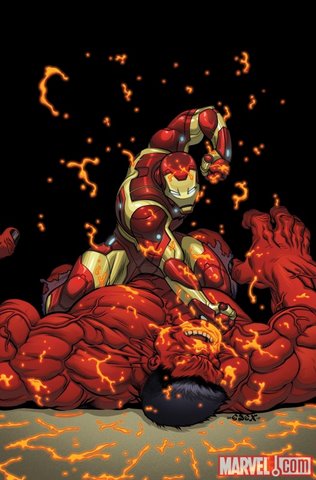 Wow, this book was a pleasant surprise. Ever since this series was started by Jeph Loeb I’ve found each issue to be cringe worthy with things like the Watcher being punched out by the Red Hulk. The series started out as a sort of murder mystery with the identity of the Red Hulk being a big deal as people were trying to figure out who he is with red herrings being tossed this way and that. The whole identity of the Red Hulk became a running joke when they didn’t reveal him. I mean, they promised it by the 6th issue but it wasn’t until it was past issue 18 and it wasn’t even in the normal Hulk title! But this issue was a huge shift in tone with top notch writing and characterization. Why the huge change in the quality of book? Well, after I read this book and thought to myself: “wow, this was pretty damn good for a Hulk book.” I turned to the front cover and saw that it probably had something to do with Loeb no longer writing the book. This week’s issue was written by Jeff Parker who has written great stuff like Agents of Atlas, Mysterius the Unfathomable and X-Men First Class.

This issue dealt with the aftermath of World War Hulks and Red Hulk has been held captive by Banner. After the Intelligica were defeated, they had some fail safes in place to cause destruction all around the world and Steve Rogers has charged with extended Hulk Family with taking care of business. In an effort to extend a hand to Red Hulk, Steve Rogers and Banner take steps to humble General Ross before asking him to lend a hand. In keeping in with the cover theme of Iron Man beating on Red Hulk, there is a communications snafu that leads to brawl between the two. And the issue ends with the menace they’re fighting ganging up on them with a to be continued.

In addition to great writing for what is pretty much a brawl issue, the art by Gabriel Hardman is excellent. If they continue to be the creative team for Hulk, I could definitely see myself buying these issues instead of just reading them off the shelf.