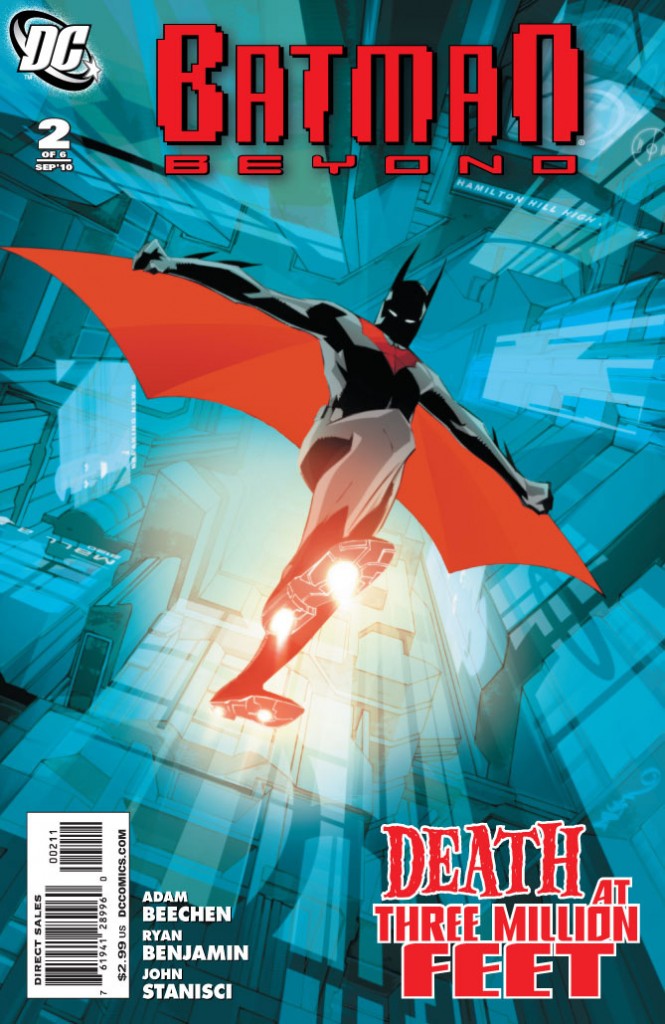 Beechen and company are back again with another installment in their Batman Beyond story, featuring the polarizing Bat-villain known as Hush. What does this issue have in store for Terry and Bruce, and just who is the man behind those bandages? Let’s find out…or not, because that would ruin the mystery. This is only the second issue after all. Don’t be silly! 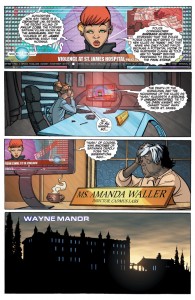 We only know Bruce Wayne as Batman. Sure, some have stepped in for him, but for all intents and purposes, Bruce Wayne is Batman. Yet, what happens when he can’t do it anymore? When he physically can’t do it anymore? Enter Terry, a down on his luck teen with a tragic story of his own. Together and with Bruce’s blessing, Terry fights crime in the Gotham City of tomorrow as Batman Beyond

After a brief police report by Commissioner Barbara Gordon, Terry flies into the cave while Bruce replaces the sheet covering the new gadgets for Terry’s utility belt.  They quickly discuss the events of the previous issue, where we saw a man purportedly named Hush attacking a hospital. Terry recovered one of the bandages around Hush’s face and handed it to Bruce for analysis. We’re quickly given a recounting of Bruce’s last encounter with Hush, where although Bruce believed him to have died, he admits to never having found his body.  Bruce says no matter who is behind the bandages, there’s a mad man loose in Gotham who won’t stop killing. As he says this, Hush strikes again at the family of another of Bruce’s old enemies. 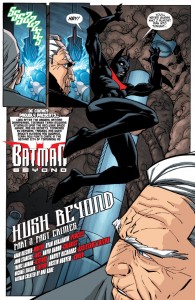 Next we’re introduced to the new Catwoman doing her lineage proudly as she attempts to break into a corporation’s building. Staying true to the established Batman-Catwoman relationship, the two quickly hit it off (more or less) and verbally joust back and forth. It is, as Terry says, a tradition. After several pages of chasing/eluding the other, Catwoman gets away. Bruce however tells Terry to leave her, and sends him to a senior assisted living centre, arriving just in time to prevent Hush from killing Calendar Man, but can Terry save himself?

As I pointed out in the previous issue’s review, the art leaves something to be desired, feeling fairly flat and almost a little too cartoony. I still think the action sequences were done quite well, so that seems to at least be a strong lynchpin in the series despite its shortcomings. The art however is missing the minor nuances I thought were nice additions in the first issue, leaving the overall presentation lacking relative to it.  The chase scene between Catwoman and Terry over several pages was especially well done, capturing the top-view of Gotham’s skyline as Terry flies after Catwoman. Much of my impressions remain the same, with the art being drawn well, while the inking is too cartoony for my tastes, perhaps pandering to the character’s younger fan base. 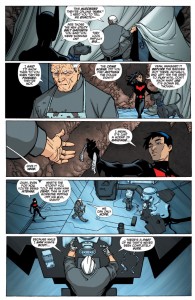 I think the book continues to add another layer to the Batman-Hush relationship, building upon the Jeph Loeb, A.J. Lieberman and Paul Dini Hush stories from recent years. The fundamental story has been adapted obviously to function in a futuristic Gotham, but the elements key to that story remain. Hush continues to cerebrally attack Bruce and his legacy, using limitless means to achieve his objectives. The story is building itself quickly, as it seems Terry and Hush will have a showdown quicker than expected. I think the story is a little rehashed however, as this basically supplants the “who is Hush?” plot device from Loeb’s original Hush story. The question remains whether this is the original Hush, someone impersonating him or even acting on his behalf. This is a fair adaptation of the story in the Beyond premise, one that is shaping up decently. I liked the introduction of Catwoman, albeit also a rehash of the Bruce-Selena relationship. It was kept lighthearted with Terry joking about the Batman-Catwoman history, referring to it as tradition and making note of their rapport and banter. The writing continues to be strong, although it feels like Terry is being written as Dick Grayson-lite. I still feel though that the book has its niche audience who will be instantly attracted to the book, while others will be a more difficult sell. The book isn’t overwhelmingly spectacular, but its writing is very consistent and does enough to warrant a read through in what is turning out to be a fun book.