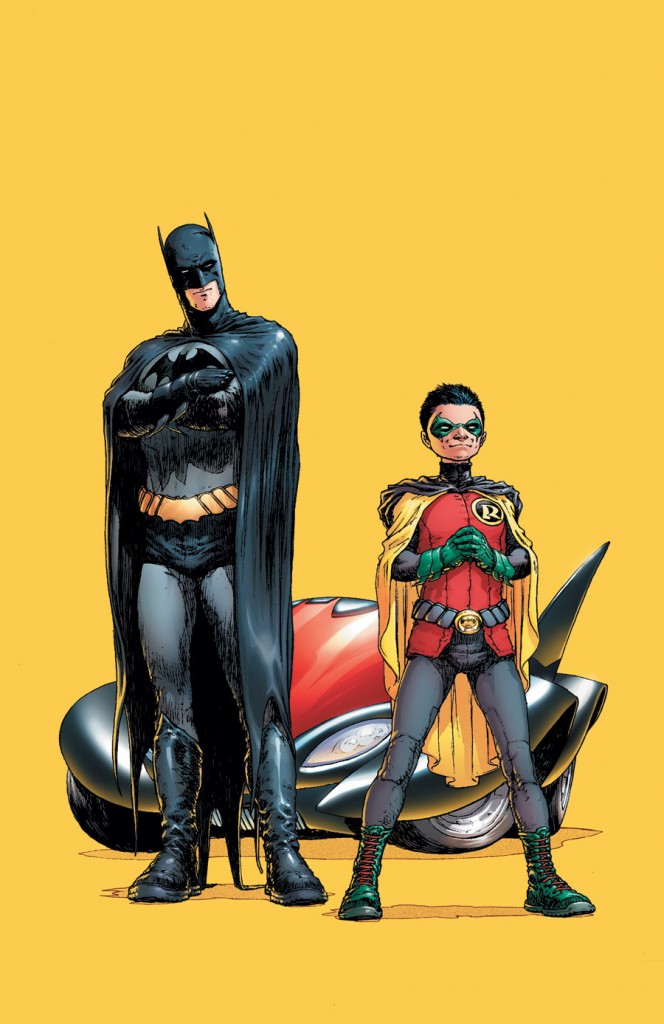 I’m a big fan of trades and hardcovers. I like having complete chapters to read. My typical Wednesday ritual is to go to the comic shop, gab with with the employees and some of the customers for a bit and eventually make my way home. I’ll grab a drink (usually a bottle of water or a can of coke), plop down on the couch, read the floppies first and then break into the trade or hard cover I may have picked up that week.

As you know from past columns, I’m a big Buffy fan and it’s the only monthly I get. Unfortunately even Buffy got a little short shifted this week as Wednesday heralded the arrival of the deluxe hardcover of Batman and Robin. 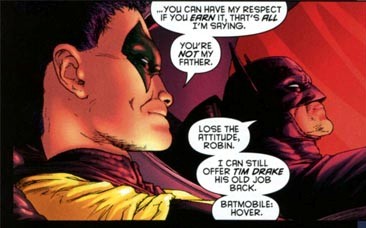 I have sung the praises of Grant Morrison’s run on Batman before but Batman and Robin is a slightly different animal. A fantastic animal.. it is like a gun-toting unicorn of comics it is that good.

For those of you living under a rock, Bruce Wayne is dead/mia/trapped in time/etc and Dick Grayson has taken up the mantle of Batman. Joining him as Robin is the slightly psychotic Damian Wayne the son of Bruce and Talia, grandson of Ra’s al Ghul. We join them on their first week out as a team.

I am not going to get into plot specifics as it will take some of the fun away from this book but I will tell you that I pretty much don’t care if Bruce Wayne ever comes back. Stay a pirate or whatever.

Morrison has set this book up so it is fresh and new but yet it’s still Batman. A lot of reviews have commented on the fact that the roles are kind of reversed which makes for an interesting read. Dick is not Bruce. He’s not brooding, he’s kind of a fun guy. Damian however is Bruce’s son with a touch of psycho, while he promised his father he would never kill (and he’ll stick to that) he see no harm in really laying in beatings.

Speaking of which, I love Damian. If I were a kid, I would so dress up like Robin for Halloween now. Just his attitude towards everything is really interesting to watch 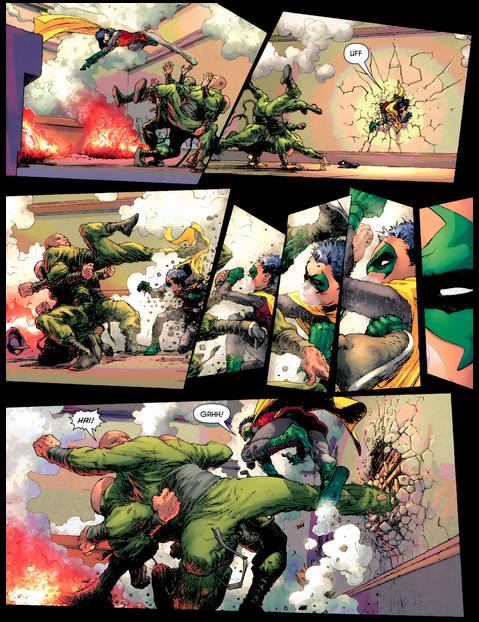 But where I find the genius in the book is the fact that this Batman and Robin are still getting their acts together. They are not the well oiled machine Gotham or the reader is used to. They screw up, not only that, they don’t particularly like each other. It is really fun to see this dynamic play out, a personal favorite is that fact Lucius Fox keeps wanting to talk to Dick about the business and Dick has no idea about anything business like; at the least he’s a circus kid at the most he’s a beat cop and vigilante. Damian laments “It’s just numbers. I can do that.”

The first half of this hardcover is drawn by Frank Quitely and it is honestly the best work of his career. While I’ve been a fan of his since his run on The Authority, I do get why some don’t like him. My friend Dan best explained it as “He draws everyone like pro wrestlers.” and if you look at the run on The Authority and The New X-Men, you can see what Dan means by his statement; a lot of broad shoulder, lot of flat faces, lot of beefy people. And while he improved that issue slightly in All Star Superman, it is in Batman and Robin where he finally sheds it. The art is fantastic, the layouts on this book are nothing short of phenomenal.

Unfortunately there is a blip when the second half of the book is taken over by Phillip Tan. I’m not hugely familiar with Tan’s work beyond that in Final Crisis Revelations which I really enjoyed. I don’t know what happened here but something doesn’t seem to click quite right. It’s hard to put a finger on what exactly the problem is. Maybe it’s just the fact he had to follow Frank Quitely (which is kind of like a guitar player going out on stage right after Eric Clapton play Layla). Don’t get me wrong, it doesn’t ruin the book but I would have preferred Quitely to stay on longer or maybe Cameron Stewart to start sooner.

All in all, this to me is what superheroes comics should be like. Fun, well written and unexpected. Now just an agonizing year until we get a second hard cover (estimated guess based on DC’s trade policy or lack there of).

But in the meantime, BUY THIS BOOK!