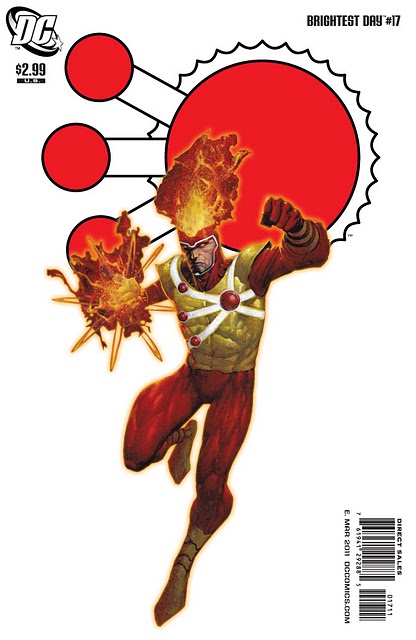 It’s hard to believe that there are only nine issues left in this 26 issue maxi-series after this one. But yes, we’re that deep into this Blackest Night follow-up featuring most of the resurrected heroes yearning for both a second chance at life in comics both on the shelves and on the pages. Get comfortable folks, and don’t forget your snacks, drinks, and anything else you’ll need as Comic Book Daily brings you another look at this hit-and-mostly-miss series.

Twelve heroes and villains returned from the grave in the wake of Blackest Night. Each has been charged with a task that must be completed if earth’s next champion is to arrive. Brightest Day follows Firestorm, Hawkman and Hawkgirl, Boston Brand, Aquaman, and Martian Manhunter as they grapple with life and all its wonders. 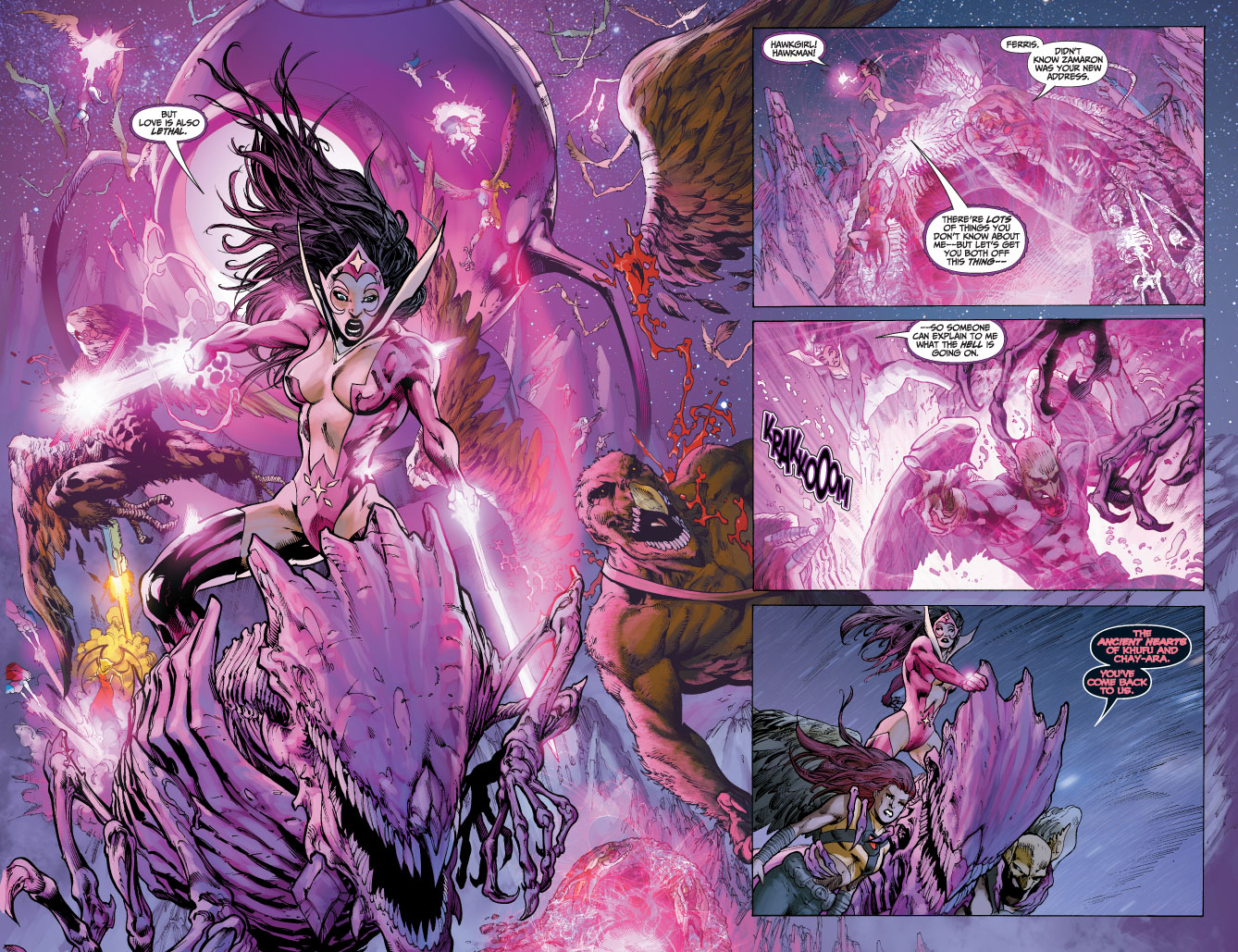 This issue picks up from the Firestorm teaser in issue 16. As it ends we are led to believe that Ronnie and Jason’s argument destroyed the universe. The story continues with Firestorm surrounded by complete darkness. After some tense moments, Ronnie deduces where they are and that they didn’t destroy it. He realizes they’re surrounded by the Anti-Monitor’s Shadow Demons and that they’ve been transported to the Anti-Matter universe.  After disposing of them, they hear the white lantern calling and move towards Qward.

On the planet Zamaron, Carol Ferris and the Zamarons defend their power battery from Queen Khea, and her Man-Hawks. Aided by the predator entity, Ferris is fairly successful in saving Shiera and Carter from certain doom as she frees them from the dimensional portal. Shiera and her mother battle, until the Predator entity senses the blackness in Khea’s heart. It goes to her and embraces her; Khea then becomes the new host of the Predator.

Meanwhile in Georgetown, Dawn and Boston share morning cheeseburgers, a kiss and their plans for the day. Boston tells her he had Oracle look into his family tree, discovering Boston’s grandfather was still alive. Dawn convinces the apprehensive Boston to go visit him. He decides to visit him in his assisted living community and they tearfully embrace each other. Boston tells him about his return until he spies a photo of his grandparents, immediately recalling a story his grandfather had told him when he was young about his Harley Davidson record for a long distance jump. Boston finds a sidecar motorcycle and takes him out for a ride. A white construct of a ramp appears and they launch into the air as the white lantern power ring begins charging incrementally from one to four percent.

As has been the case throughout the series, the art in this issue maintained the book’s standard of great art. This issue blended together some great panels featuring Brand, Firestorm and the Hawks.

Scott Clark’s work on Firestorm was relegated to four pages, but he continued his trend of startling amazing work. Most notable was his two-page splash where Firestorm sets off a small nuclear blast to irradiate the Shadow Demons, blasting them off their body. The page is indescribably amazing, made all the more visually astounding by Steigerwald and Sotelo’s colouring. Overall Clark’s work on this issue is on par with anything he’s done on Brightest Day. 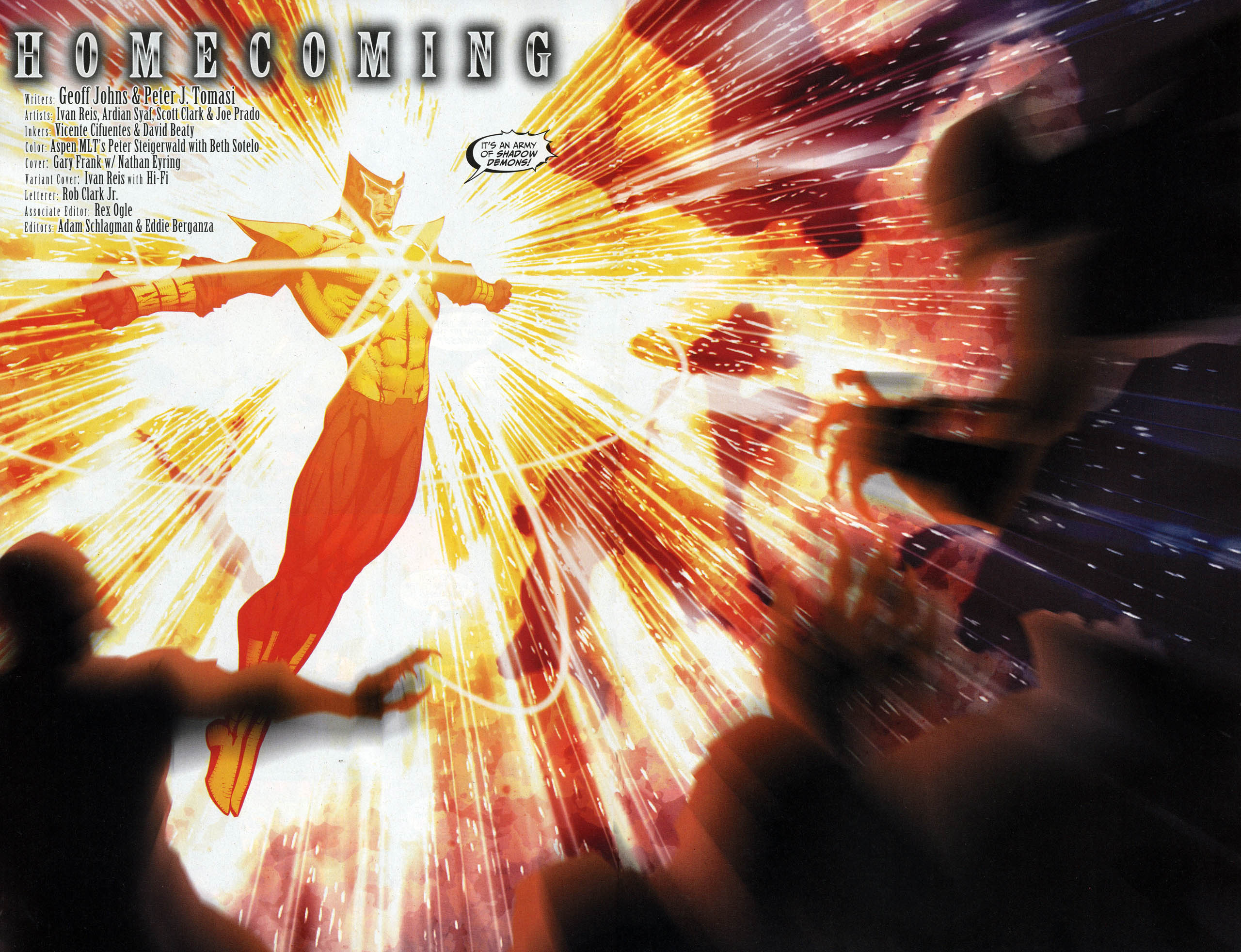 Ivan Reis’ work is also well done. He delivers some nice work throughout the issue where his work isn’t drowned out by the darker inks as usual. Rather, Reis’ pages are lighter and more cheerful, notably in the first set of Brand scenes where Boston wears a light blue apron with a dove on it. Reis also hits his mark in capturing the emotions of the characters, held together with some great panel transitions. We can visually see the happiness shared between Boston and Dawn both on their faces and in their eyes. In the following page Reis creates more of a dichotomy between the well-adjusted Dawn and the still adjusting (to life) Boston when he tells her about his grandfather. He glumly tells her he’s not sure if he should visit him, while Dawn is over-excited at the news. Reis simply has a knack for creating very expressive character models and showcases them in this issue.

Reis delivers another great scene while Boston visits his grandfather that’s mostly silent. Reis transitions from Boston’s grandfather looking at Boston, to a panel where his hands shakily try to clasp around Boston’s until he reaches them, and then two scenes where Grandpa’s eyes well up while tears stream down his face just as Boston does the same as he smiles. This sequence ends on a silent note, with Reis pulling the page back leaving only Boston on his knees with his head in his grandpa’s lap as they embrace. It’s simply a great sequence of panels. Reis finishes his work on the Brand story as he and his grandfather ride through the countryside on a sidecar motorcycle, flying through the air aided with a white lantern construct. The happiness in their lives is clear, finally flying free for the first time in a while alongside some doves. These are well placed allusions to both Dawn Granger’s alter ego Dove, and the apron Boston wore earlier with the dove on it. 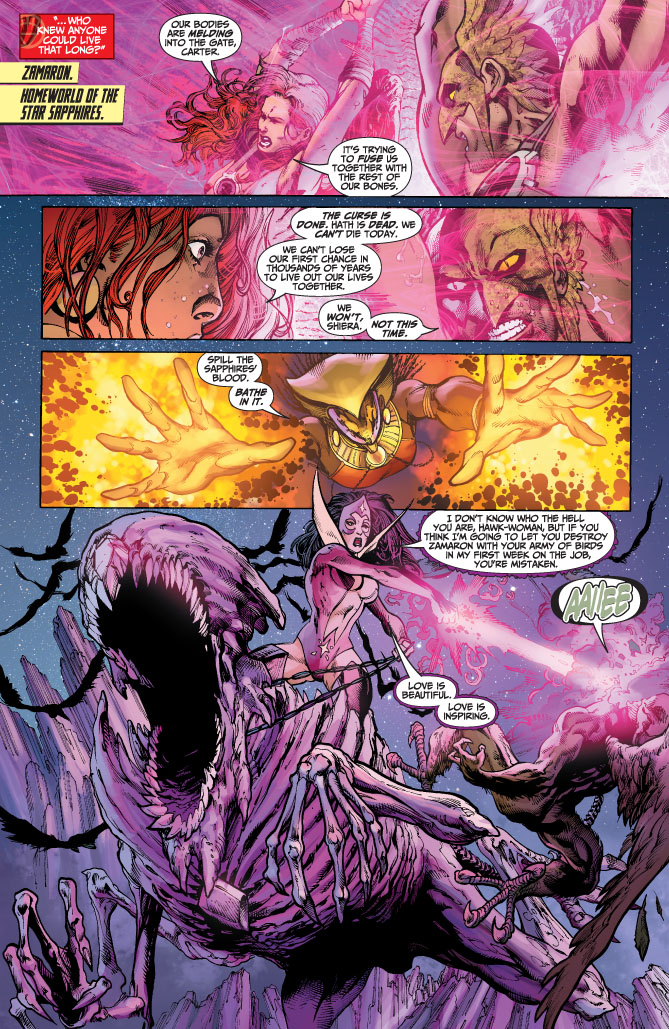 Completing the art trifecta this issue is Ardian Syaf’s work on the Hawks’ story. Syaf’s work is hit and miss, depending on what he’s trying to draw on a given page. Some of the pages featuring Carol Ferris riding the Predator feel weaker than the body of the work. The characters look stiff, almost like cardboard in some panels to uninteresting levels. He does however deliver some solid work otherwise. Any close-ups of the Hawks or of Ferris are imaginative and detailed, especially the one page with the Star Sapphire power battery in the background. Syaf otherwise does a good job altogether.

I feel like this was one of the best issues of the series, which until this point has been mostly underwhelming. Sure you can joke that such a statement is empty since it’s been so bad, but altogether the writing, art and structure came together to create a very good issue that was well paced and nicely put together. The issue focused on three stories, albeit relegating the Firestorm story to the first few pages to complete the tease from the previous issue. For the most part then, the issue focuses on the Hawks and Boston Brand. The two stories alternate every few pages, which rarely has made sense in this series, but it does here due to the natural breaks in Boston’s story that help soften the transition between stories. The Hawks story does this to a lesser extent, but that’s because it feels like very little happened in their story. The entire issue was mostly a throwaway in that regard for them, as the Hawk story wasn’t really moved forward. In contrast Brand’s was nicely paced throughout the issue and was nicely executed.

I’ve felt from the beginning that Brand’s story was the best overall and had the most potential. This issue delivered and lived up to the potential of Brand’s story as the lynchpin of the series. It has sadly taken a back seat at times to lesser narratives, while I believe this should be the running thread of the series. Although I personally enjoy the Firestorm and Brand stories, this series is still a polarizing book. I can’t recommend this beyond following the characters you like, although I must say that most of the stories are lackluster and are either too predictable or are just poor altogether. The Brand story is the best of the series easily, and brings this issue above average relative to the whole.