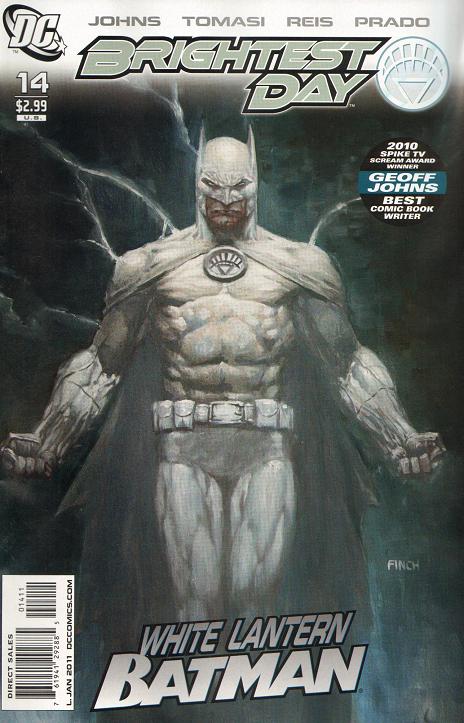 Guess who’s back! Yes, despite all my misgivings about this series I’ve returned with yet another look at Johns and Tomasi’s year-long maxi-series. The book’s had more downs than ups, but Batman’s on the cover and that makes everything potentially cooler. So strap in folks it’s going to be a smooth (or bumpy) ride.

Twelve heroes and villains were returned to life by the white entity during Blackest Night. That same entity later gave each of them a glimpse into what their destinies held for them. We know the destination, but the journey is always the fun part. Brightest Day follows Firestorm, Aquaman, Hawkman, Hawkgirl, Boston Brand, and Martian Manhunter as they fumble their way through life.

It’s the beginning of the story and Boston thinks he’s Daredevil. Leaping into action, Brand suits up as the ring tells him a replacement has been chosen, heading quickly towards the Bat-Signal. Brand flies through the air with the greatest ease (without a trapeze), while the ring asks him what’s he doing. 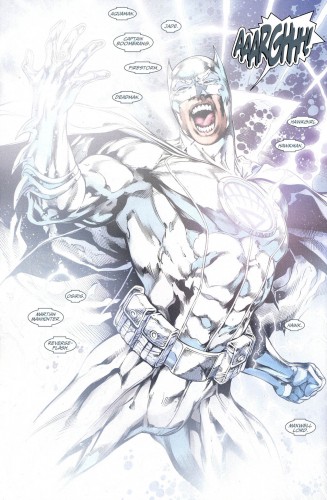 During his travels, Brand stumbles onto some thugs as they rob a warehouse. Bullets and bad puns start flying as Deadman leaps into action against the six, seven if you count Mr. Freeze standing behind Brand. Batman arrives and smashes his old foe’s protective glass helmet. Bruce and Boston talk a little before Boston wills his white ring onto Batman’s hand much to the perplexing of Batman and the recently arrived Dove.

Bruce transforms into white Dark Knight (Shakaka?), who explains why Brand was chosen to wield the white ring until the chosen is found. It also tells him he chose poorly in coming to Batman, as one of Freeze’s thugs stir. A gunshot rings out, and Deadman dies.

His life flashing before his eyes, Boston witnesses scenes from his past; a heart to heart conversation with his grandpa he walks out on to watch television; a date with a girl in high school she walks out on because he’s more concerned with why their diner order is so late than he is with her.

Flashes of his final night alive are shown as he takes to the trapeze; shot dead moments later from a clawed man in the crowd. Boston’s spectre witnesses his own death and how he treated everyone around him, ultimately concluding he doesn’t want to die.  He proclaims he wants HIS second chance, and the ring tells him to stop hesitating and take it. The ring imparts one final message before Boston springs back to life, tears streaming down Dove’s eyes. The issue ends with the two embracing, kissing as Batman does his grim Christian Bale-esque “thing”.

At this point I really feel like I should just record my comments where the art is concerned, or maybe limit it to grunts of various tones t 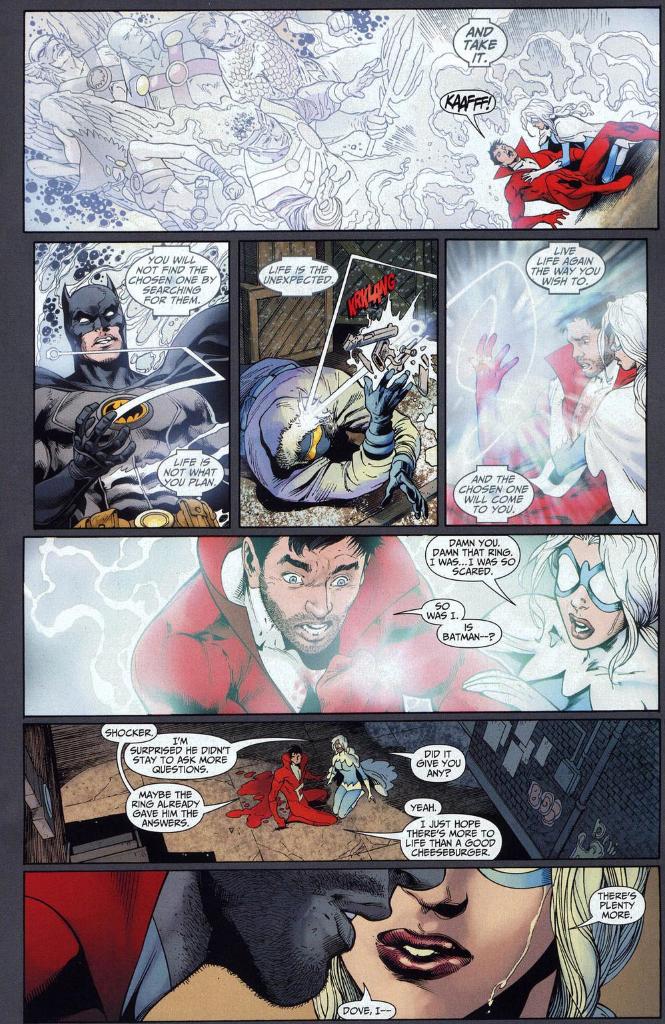 o communicate what I think about the art. Seems like an idea, but for the sake of the folks just tuning in I’ll soldier on. 🙂

Considering the story told in this issue, the art was top-notch. Ivan Reis has drawn the artistic duties for both Boston Brand and Aquaman throughout the entire series so far and he has yet to disappoint. This issue is clearly not an exception. All of his trademarks are present, dark inks complemented by panels with real cool looking elemental effects such as the light emitted from the white ring, or from Brand’s eyes; both on the first page. That’s followed by a nice splash spread of Brand leaping out in the Gotham night without a care. The Batman scenes where he attacks Freeze look great too, both where Bruce smashes his helmet and later as Freeze is grabbing his throat, gasping for air.

Where Bats is concerned, the white lantern page looks pretty close to marginally fantastic with a twinge of soiled under garments. I thought the art during the flashback sequences was really nice. A standout panel, and one I thought was very fitting the moment was where a younger Boston was speaking to his grandpa and storms off to do something more “interesting”. Watching idly as a spirit, the younger Boston walked directly through non-corporeal Boston. The most emotional scene though is saved for the end where Boston and Dove do something truly shocking that no one could have ever expected; ever. They kissed, and it was a nice way to start Boston towards the meaning of life.

And Batman is just Batman.

This issue entirely focuses on Brand’s story, which I still feel is the best of each story this series has to offer. Since his return, he’s been unsure why he’s back, and here we see his story take a positive turn towards understanding who he is and what he has to offer the world.

Despite enjoying the Brand story more than any other this series has had to offer, I don’t agree with issues like this where the entire issue focuses on a single story. It’s no different a situation than the last issue structurally. I feel it’s detrimental to the book as a whole. 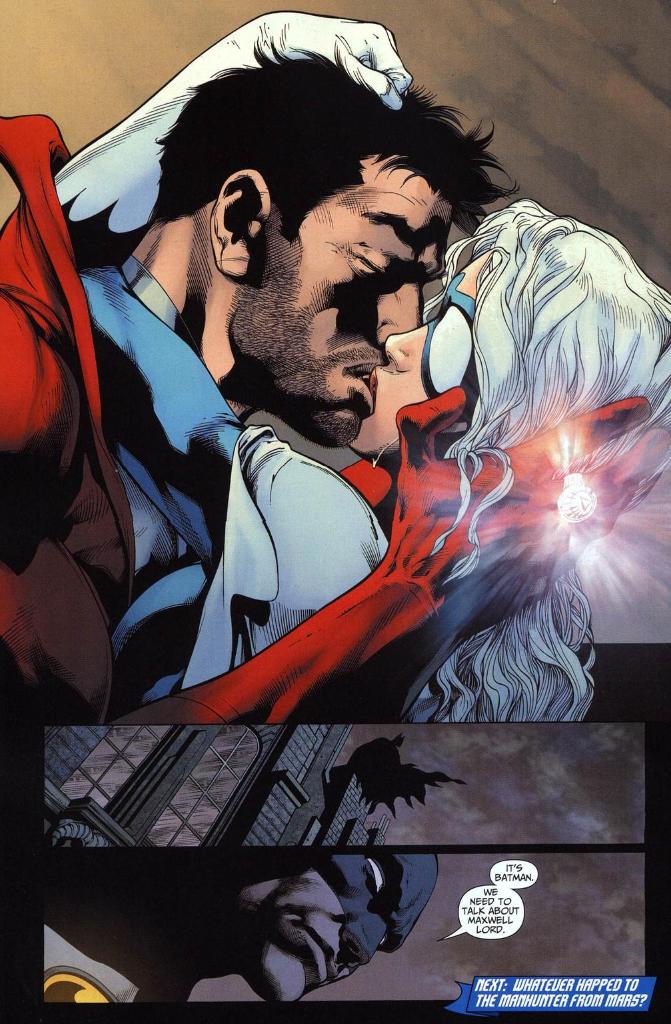 For the sake of those who have yet to pick up an issue, I’ve had issues with this series from the beginning because it feels too much like 52 or Countdown, neither of which were particularly good. This is more the case concerning the latter. Like Countdown, the story feels disjointed and lacks focus more often than not. There were times earlier in the series where the book could focus one story for seven pages, but then shift to another for two, then back to the first for several, and then another for a couple. It jumped all over the place and held many of Countdown’s trademark problems.

The middle issues of the series were the best, using more of a sandwich style to structure the book. In those issues there would be a main story at the beginning and end of the issue, and then two secondary stories told back to back before finishing with the first story. Those were the most coherent issues. Yet, now Johns and Tomasi have reverted back the original format, if not abandoning it entirely now for consecutive stand-alone issues. I suspect that the preview towards the end of this issue means we’ll be going back to Mars next, and if so, don’t expect a review if it’s anything like this.

Johns and Tomasi are solid writers, and again this is not a knock against them. Conceptually, this 26 issue series is a bad idea that no one can pull off. It’s a structural issue with the series where it’s trying to do too much with too many characters. The story as a concept is fantastic and I completely understand what Johns and Tomasi have in mind, and even who this white ring bearer will be. It’s just being poorly executed. However, it will read well as a collected trade. I’m very sure of that.

Once again, I would have to recommend picking and choosing which issues you buy, or just waiting for the trade entirely. It’s really not worth it to buy this in serialized format unless you’re completely invested in each of the characters, which I can’t see how you could be at times where each seems to disappear for several issues at a time.

I love this series as a concept and understand it, but the road to the conclusion is painful; much like life ironically. I swear, if that’s the killing joke here, I promise the final review will be two words long.

Until next time folks!