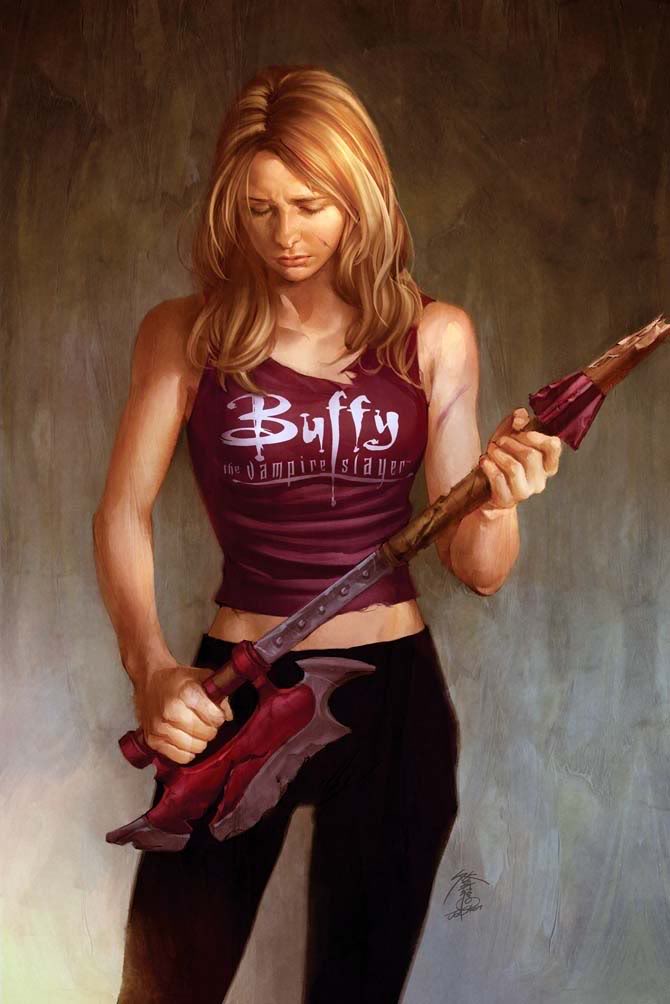 Full disclosure – big Buffy fan since I was 16. I actually watched the premiere episode when I was very young with my sister and it scared the pants off us both. While we both grew to love the television show, I have been following the comic series or ‘Season Eight’ since issue one, four years ago. I came in with no expectations, Joss changed everything at the end of season seven and anything was possible. Well, turns out, it most certainly was. So here we go. 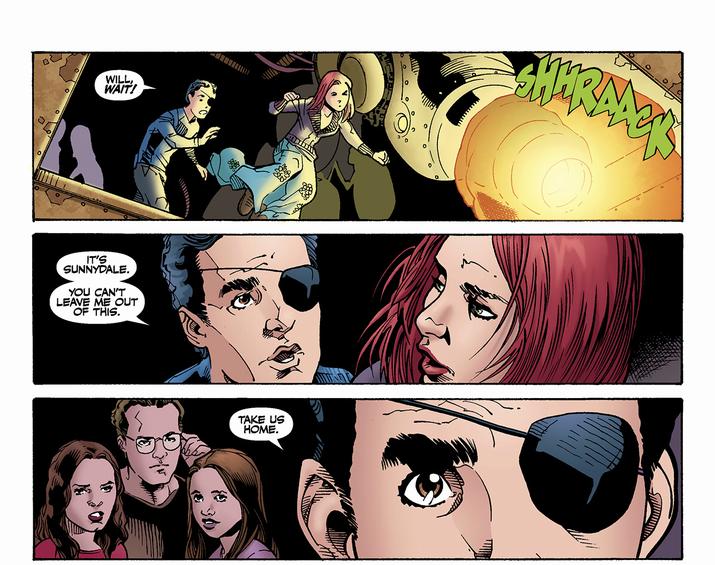 Basically Angel is Twilight. The Scoobies and for lack of a term Team Slayer have been fighting Bad Big’s for what seems like ever. There have been a number of breakthroughs in past issues like utilizing werewolves, wrestling with magiks, fighting goddesses, and the appearance of Buffy as Super Woman.

Of course a Super Buffy and Super Angel come together, oh boy, do they come together. We’re talking a whole another level – rather universe. But being our hero Buffy goes back to save the world. The only problem is, Buffy just banged the Big Bad. Enter Spike.

BTVS #36 start’s with what else, a prophecy revolving around Angel – although the only information we get about it is that it’s a “reward”. Enter a bleach blonde British vampire and his army of cockroaches.

Buffy tells Angel to go and fight the good fight and its right back into battle. Aboard his ship, Spike tells Buffy not to trust Angel. Then he tells her about the Seed of Wonder. Which we learn on the final page is being guarded by the Master.

In BTVS #37, Spike tells Buffy about the Seed of Wonder. In its most basic form its the source of all the magic in the world. It’s also in Sunnydale, keeping a cork in it, the Hellmouth that is. We also learn when Buffy and Angel had sex they created a new universe that Buffy subsequently abandoned. Cut to Xander promising Dawn they’re going to get an apartment when it’s all over.

Meanwhile, Angel and the Slayers are fighting for the world. The Scoobies upon realizing the seed is in Sunnydale they attempt to come up with a plan as Willow passes out cold.

Aluwyn, Willow’s goddess and secret love, tells Willow she has to stop Twilight from removing the seed and opening the gateway to hell. Or else they will have no other way to communicate with each other.

As Angel fights the good fight, the Scoobies arrive in Sunnydale only to find an army fighting some big, Big Bad’s overtop the Hellmouth. Buffy flies Spike underground where they confront the Master. Buffy promptly smashes his head in the ground. Angel on the other hand is being greeted by an unfriendly force. 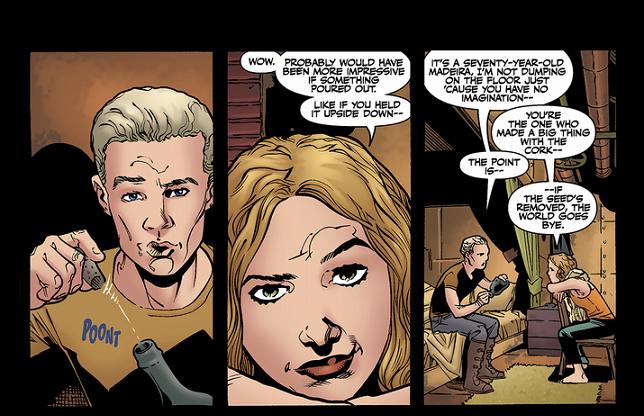 BTVS #38 starts with Angel at battle with some sort of demon lion force who tells him to finish what he started as Twilight.

As the team finds their way underground Willow admits she knew the Master was watching the seed the whole time, to which Xander replies “And you didn’t tell anyone?”

Then Xander makes a Lord of the Rings reference calling the seed “his precious” and ten minutes later his girlfriend, Dawn, is being pushed into rubble by a demon army. As he carries her to safety Buffy tries to stake the Master and Willow stops her. Now, the Master is on the team. Willow suggests they use the seed’s magic to connect to “spiritual sex Eden” she and Angel created to “heal the earth, chase the demons out”.

The Master turns on the team and they realize the seed is like “Buffy Kryptonite”. Buffy and Giles discuss, yet again, the imminent need to slay Angel. After, it’s a quick pep talk and Buffy’s back to doing what she does best, slaying demons. 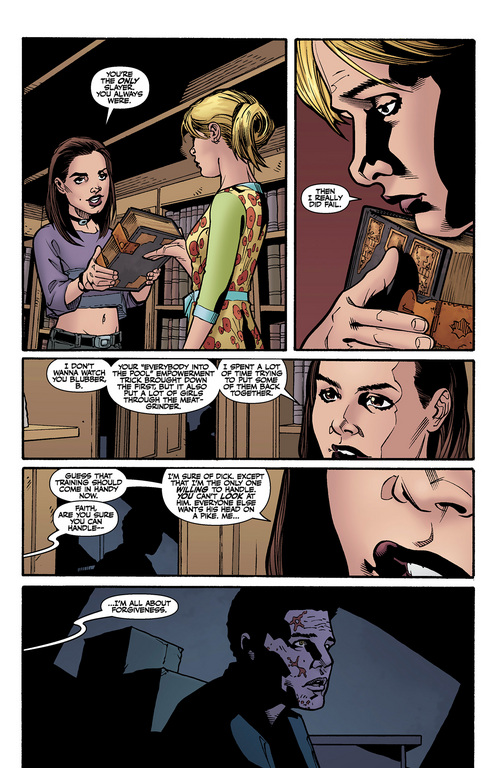 In BTVS #39 Willow’s gone bad, Twilight’s back and everyone is at battle. Willow is so high on magic she joins in, supercharged.

As Buffy battles her former lover, Xander watches on and out of the darkness Giles approaches with the Scythe. Xander warns Giles not to get between the two of them. Giles is convinced he can end this and takes a step into battle. Seconds later Twilight, Angel, grabs Giles by the neck and kills him. Heartbroken and in tears Buffy takes the Scythe and destroys the Seed of Wonder. The battle ends. Willow falls to the ground screaming for her goddess in tears. All magic ceases to exist and Willow cries to Kennedy “We lost! This is the end.”

Buffy falls to the ground, the scythe and her heart-broken.

BTVS #40, season finale, and the issue we were all waiting for. The world has changed again and now Buffy is back to…waitressing. Willow lost her powers and subsequently left Kennedy, who is leaving. Willow is a mess, in shock, obsessed her inability to create magic and suffering the loss of Aluwyn.

Dawn and Xander have their apartment, and Buffy crashes on the couch. After Giles funeral the Faith and Buffy learned he left everything to the former – “the money, the flat, the farm, the horses…” Buffy gets the leather-bound book of the Vampyre, because she’s the only slayer.

The reader gets a glimpse of Angel, a mess, underground and cuts back to Spike and Buffy at Dawn’s window where he tells her he understands her choices. Then our hero is alone, “every night.”

The book finishes with Buffy on the streets, where she belongs, doing what she does best. Slaying vampires. 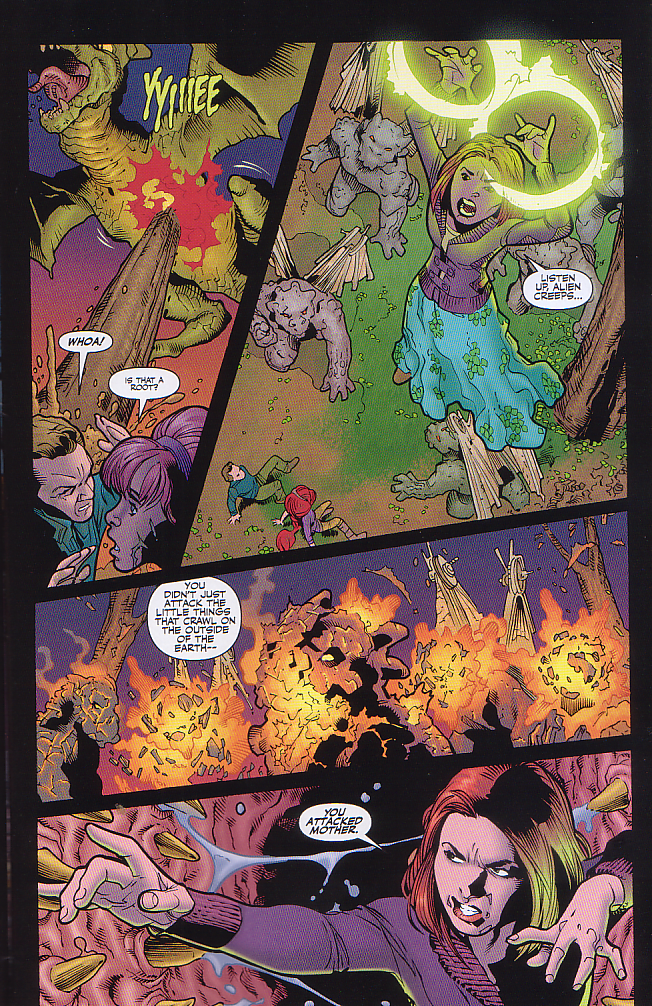 Jo Chen, Andy Owens, Georges Jeanty, can the artists get any better for this project?

Chen has been doing covers for the series since the beginning. They are gorgeous. The way the first cover and the fortieth cover connect the entire run is incredible. I prefer his covers to the variants because she makes the characters look so real, and emotional. Chen’s covers, I can honestly say made season eight a standout on the shelves. They have movement, and heart.

Owen on the other hand makes the characters look cartoonish. This is fine, because Jeanty keeps continuity, and the characters generally look the same panel to panel and this is a feat considering the big cast of characters. The panels throughout the arc are imaginative, creative and filled with demonic beasts of all sizes, shapes and colors. Jeanty does beautiful close-ups of the characters faces during high points and does a tremendous job of capturing some of the emotions key players are feeling, especially in #39 when Willow falls to the ground in tears upon loosing her magic.

The visuals in this arc are at times outlandish and at others startlingly human. Also, for a bunch of guys, they do great fashion! 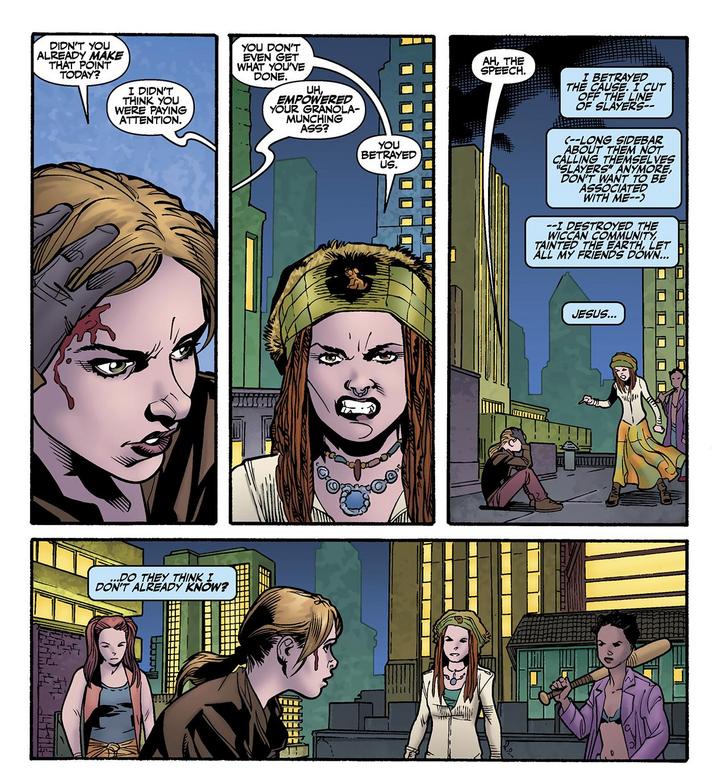 It’s been a long run to sum up in just a few issues, let alone one. I think most fans and casual readers would agree it was a fun time getting here. Leave it to Joss to give us a tragic end.

Giving Buffy superpowers changed the dynamic of the book. I think some of the writers felt that as well. Buffy really is best when she’s doing her thing – slaying nitty-gritty with her Scoobies. Buffy fans like our hero a little bit down and out. Unfortunately the comic book medium made this battle seem like the longest in Buffy’s history. I really wonder if they ever stopped a second to eat between all that fighting.

Bottom line, we all love Buffy because she’s a superhero, but she’s also just a girl.

Joss does an amazing job of spinning a web. He plans the beginning and the end and everything in between, even if it seems like we’re going really far off track. The series answers a lot of the questions we’ve been asking for a long time.

Now looks like fans are going to get a bit of a throw back.  I like the idea of Spike hanging around the window and Buffy slaying in the back alley. They writers also set up story arch’s for many of the major characters. No doubt Willow’s going to get her own spin-off series at some point. Angel’s going to be coming back from IDW so there’s a lot for fans to look forward too.

Finally, Giles’ death was heartbreaking. It was the last thing I saw coming. Joss really did “do it again”. I read in an interview he felt Anthony Stewart Head’s incarnation of Giles was not represented well in the comics. That the bookish-British type didn’t translate. Let just hope they work it into the next storyline with some grace, because his character is one that will be missed.