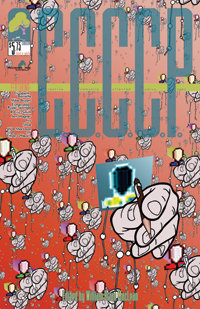 I’m the first to admit my limitations so here goes.

I’m not much of an indy comic guy.

It usually takes something special to grab me in terms on indy comics. Bone for instance grabbed me the minute I saw it.  My cousin once brought up this colour collection of Teenage Mutant Ninja Turtles which not only introduced me to the comic book Turtles but something about this weird Aardvark named Cerebus that appeared in the trade really grabbed my attention.

This doesn’t mean I don’t support indy comics per say.  If you can put together and print a comic book, if you have the sheer will and commitment to do that, even for one issue, I salute you and wish you the best of luck.

However if you’re just retreding ground that Chester Brown, Terry Moore or Dave Sim have already left their marks, don’t expect me to shell out four bucks for it just because you’re lonely at your booth.

Do something to make yourself stand out. Make sure your production quality both in art and story is the best that it can be even if it’s photocopied. If it’s a photocopied comic, make sure it’s the most creative photocopied comic you’ve ever seen before you try to convince me it’s worth buying.

That being said, Comic Book Daily recently asked me to take a look at CCCP, an anthology comic created by a bunch of web-based creative people.  In doing this, I’m also going to use this as a way of hopefully helping out some of you indy comic types. CCCP stands for Creative Community Collected Comics Pages.

As far as the actual book, it was money well spent by the creators.  A solid cover stock and decent quality paper within.  Other indy books might want to take notice of this. Decent production values can go a long way of attracting a potential buyer.  Not only that, decent paper stock can make your art look like how it’s supposed to.  Crap paper however can have the opposite effect.

Now in terms of the actual stories within, it’s not fair to throw them all in the same boat as they were produced by different people. So here goes.

The Adventures of Wrist Slashing Girl
This series of one page strips (it appears through out the book) is…well I’d say it may be trying to make a joke but it’s hard to say. The lettering is so small in these strips that I gave up trying to figure out what the point was.
Remember when I mentioned production values affecting your work? Here’s a great example. This could have been a printing mishap or a problem in translation for a scanner but at any rate, someone should have caught this problem.

The Engineer in His Cups
Easily the standout story in the anthology. Crisp art that serves the story well, a story that’s funny but doesn’t overkill the joke. Once again the only issue is the lettering.  It occasionally blends in a little too much with the backgrounds but a great effort.

Magic Hour
A photo comic that I…er..um…got no idea. No production complaints, just have no idea what the artist was trying to get at.

Shockingly True Tales of a Car Title Loan Officer: Episode 1
I recognise the customer in this comics…I dealt with him when I was a repo man.
Kidding aside, the art was ok as was the story but for a one pager nothing really caught my attention nor did anything leave me wanting more.

The Magic Cheese
To be honest, nothing in this little two pager.  The art wasn’t great and the story lacked anything interesting.

I Love You Lula
Again, okay but nothing really stands out other then it the story of a little girl’s cat as told by a little girl.

The Tragic Tale of Lou, The Self Aware House Fly
A resounding meh.

Chateau du G’yargh’thraxx
The tale of an alien (I think) wanting nothing more to enjoy a drink out of the skull of his enemy and everyone criticizing his choice in booze. Decent art and the story was alright.

Ten After Ten: The Unfortunate Tale of Rose the Exotic Dancer
A one page photo comic about the murder of Rose.  I rather liked it. This showed what you can do with a one page narrative.

And there you have the comic. Would I buy another issue? Honestly, no.  If the creators of the few stories I did enjoy did their own books, I’d probably give them a look but unfortunately the bad or more appropriately, the boring out weighed the good in this anthology.

And there be another lesson.

If you are assembling an anthology, make sure all of the work is up to par.  Just because someone can draw and has a few bucks to throw in for the publishing, doesn’t mean he’s good or that it will help your comic. Had the other stories all been up to par with the good, I would have given a second issue a shot.

But hey, that’s only my opinion, if your curious, check it out at www.roostertree.com.