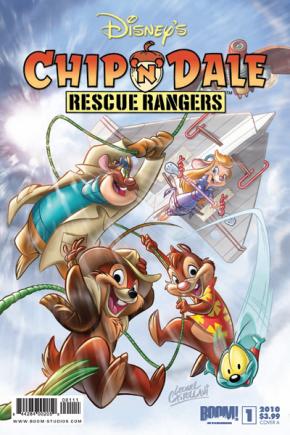 Covers: Leonel Castellani (A), Jake Myler (B and C)

As was first revealed here at Comic Book Daily back in August, Boom! Studios announced at Fan Expo in Toronto that they would be expanding their Disney Afternoon line to include the classic cartoon characters of Rescue Rangers in a new series. That time has arrived, friends. So I ask, will the series chip away at the mediocrity of every day(le) comics with the array of gadgets at its disposal, or will it be high on the Monterey Jack, like this joke?

Leave your hatred and jeers in the comment section.

Starring the chipmunks Chip, Dale, Gadget, Monterey Jack and their ever loyal house fly Zipper, they solve cases while fighting the forces of the kingpin of crime, the ever dangerous Fat Cat.

The issue focuses on the gang’s search for the first part of the super-key. The team ventures deep into the sewers, guided by Monty in search of the first part of the key. Years earlier a group led by Gadget’s father used a device called the animal rescue signal to respond to worldwide attacks on animals by humans.

Feeling that the machine could be used for evil, Gadget’s father locked the door to the ARS with the key and entrusted its safekeeping to Monty. Revealing its hiding places at four points across the globe, it was thought that no one would ever be able to get inside the group’s lair to use the machine. But with the recent increases in strange animal occurrences, Monty fears the worst about the machine, who could be using it and to what end. After navigating past sewer alligators, the Rescue Rangers find the first part of the key, and move on to Brazil to find the next piece. When they arrive, it takes Monty time to recall where he left the map to the key, eventually remembering that he left it in the captain’s quarters of a shipwrecked ship. The group enters it to find  the map has already been commandeered by Pi-Rats, and have captured to Dale to boot!

Keeping with the lighthearted theme of the other Disney Afternoon titles published by Boom!, Rescue Rangers’ art is light, colourful and does a great job capturing the character models and translating them into the comic book. Castellani’s art hardly does anything new, nor does it take chances. It doesn’t need to though. The expressive nature of each detail of the characters and their environments are well penciled and coloured, showing a real talent and knack for the characters and the cartoonish nature of the book. It feels like you could be watching an episode of the cartoon. The models are that accurate.

The art also includes other minor touches such as differentiating between present day and flashback sequences by adding a yellowish tone or hue to those specific panels. Like its sister books, the detailed art is light, cute, and altogether really fun to look at. 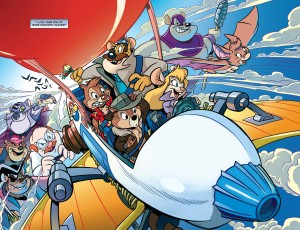 It’s hard to come into this book with any expectations other than it being just a fun departure from my usual pick list. With that understanding, the issue delivered as much as could be expected from a first issue. It’s also one which is the first time to my knowledge the characters have been used since the cartoon went into syndication and eventually off the air entirely in 1993. Ian Brill turned in a solid first issue with these beloved Disney characters, putting them directly into the thick of a case, while the villainous Fat Cat appears to be up to his old devilish tricks. Each of the characters from Chip to Monty, down to Zipper the superhuman fly all maintain their classic characterizations complete with the expected quirks. Whether it’s Chip’s seriousness, Dale’s jokes, Zipper’s heroics, Gadget’s ingenuity or Monty’s…knack for overzealous storytelling, each is given equal attention. Similarly to Darkwing Duck, Rescue Rangers was a quick, yet fun read filled with everything you should expect from Boom!’s Disney line of comics.