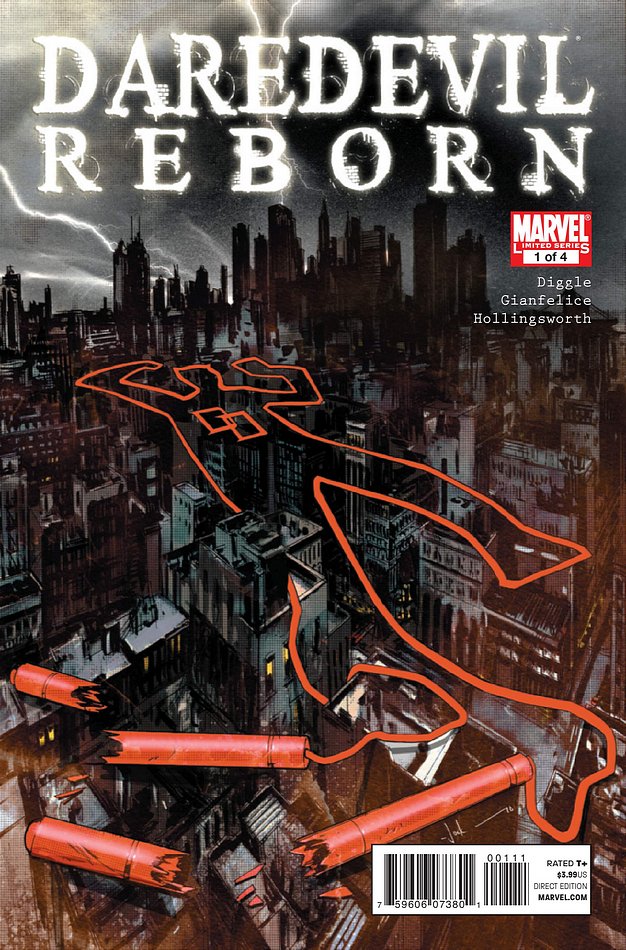 Come one, come all! Witness the rebirth of a(nother) comic book character. Excuse the cynicism, but it feels like there’s a rebirth in comics every few minutes. With this issue Marvel comics brings readers yet another one in the form of Daredevil Reborn, a mini-series focusing on Matt Murdock. Taking place in the aftermath of Shadowland, Reborn hopes to chronicle Murdock’s redemptive path towards finding the man he used to be.

Crossing a line he could never come back from, Matt Murdock killed Bullseye. The death of his nemesis was the catalyst for the events of Shadowland and the eventual downfall and ultimate corruption of the man without fear. Now self-exiled from his home, Matt Murdock tries to find himself within the solitude of a small town within the United States’ Badlands. The locals, however, don’t take kindly to the presence of strangers… 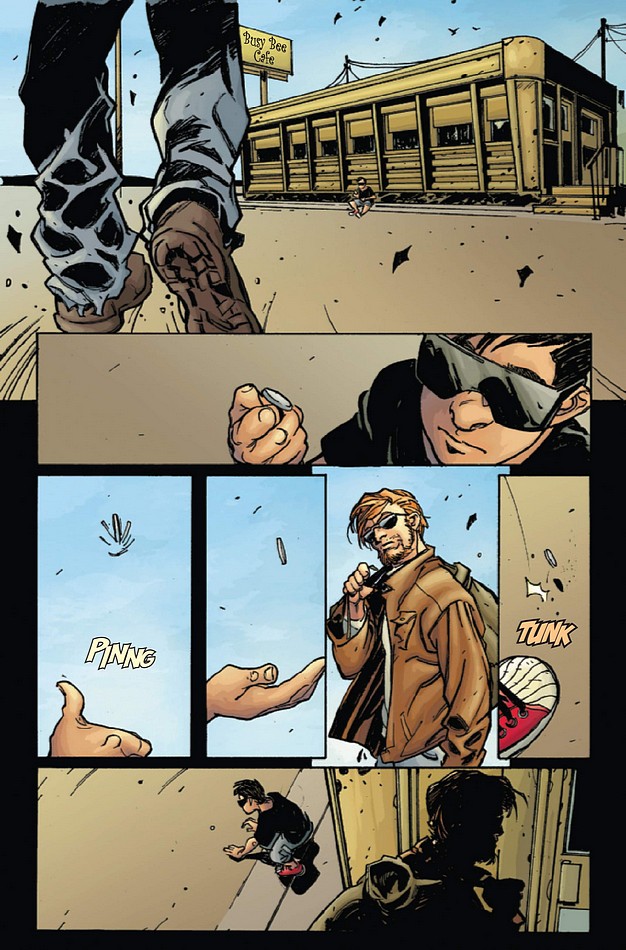 Now at the end of the long walk he began at the end of Daredevil #513, Matt arrives in a small Badlands town. Stopping at a diner, he spies a young blind boy flipping a coin and trying to catch it before going inside the diner. Once inside he orders a meal despite the waitress giving him a hard time. She delivers his meal, and leaves to the kitchen where she immediately phones someone in a hushed tone.

Leaving the diner, he walks up to the blind boy and gives him advice. He teaches him to single out the sounds of his surroundings, especially the coin when he tries to flip it. The boy tries again and catches it successfully, then imparting his own story to him. A group of men arrive and give Matt more trouble. Despite being more than capable of beating them all, he takes the beat down they give him. The town Sheriff arrives to break up the skirmish, sending the men on their way and carting Matt elsewhere where he can spend the night. The Sheriff leaves him, but not before strongly advising him to leave town the following morning. As they leave, the boy calls to him as the car door closes. He asks him not to go.

The Sheriff’s office starts doing research on Murdock and come across the available information on him and his connection to the Daredevil persona. They decide they don’t like the idea of having a super-hero in their town and decide to go find him and put him out of commission. Now far from where the Sheriff dropped him off, Murdock wanders into a junkyard where his acutely tuned senses pick up the stench of dead bodies. He starts to dig and uncovers a small burial site with a presumably previous sheriff included among them. The Sheriff’s men arrive and nearly run Murdock down with their squad car. Leaping to safety and out of view, the officers exit their car and try to find him, not realizing Murdock is in mid-air and about to pounce on them under the moonlit sky. 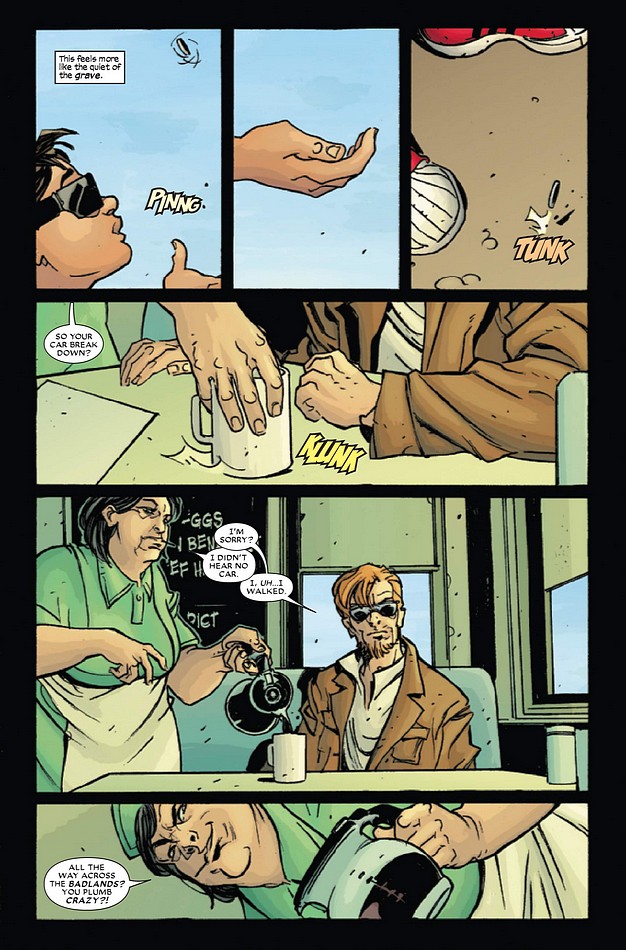 Matt Hollingsworth follows Diggle onto the Reborn title as the colourist, maintaining continuity between Shadowland, Daredevil, and Reborn concerning the colouring of the artwork. There are noticeable similarities in the issue’s presentation and Hollingsworth’s hallmarks and colouring style are very noticeable despite Gianfelice’s pencils. He does what he can to bring out Gianfelice’s work. The artwork itself I felt was not as good as it could have been and is sub-standard comparably to past work on the Daredevil titles. The art doesn’t feel as realistic as it could. The pencils altogether were lacking as a whole.

The pencils aside, Gianfelice does a good job of telling Diggle’s story visually, capturing each moment of dialogue with each successive panel.  This is mostly noticeable in the earliest part of the issue during the scenes where Murdock interacts with the young boy in front of the diner and in the following pages after the diner exchange. Gianfelice draws a number of panels following the coin flipping sequence with the boy and Murdock; one panel sees the boy fail to catch the coin, and then Murdock walking up to him, picking up the coin, a panel zooming in on the coin, and finally Murdock kneeling beside the boy and showing him the coin.  Gianfelice continues the sequence, showing each moment of the boy’s successful catch. The scene then gradually pulls back as Murdock and the boy talk, ending with a wide-shot of the diner. There are several other examples of this kind of layout throughout the issue, and despite his pencil work, Gianfelice performs strongly here. 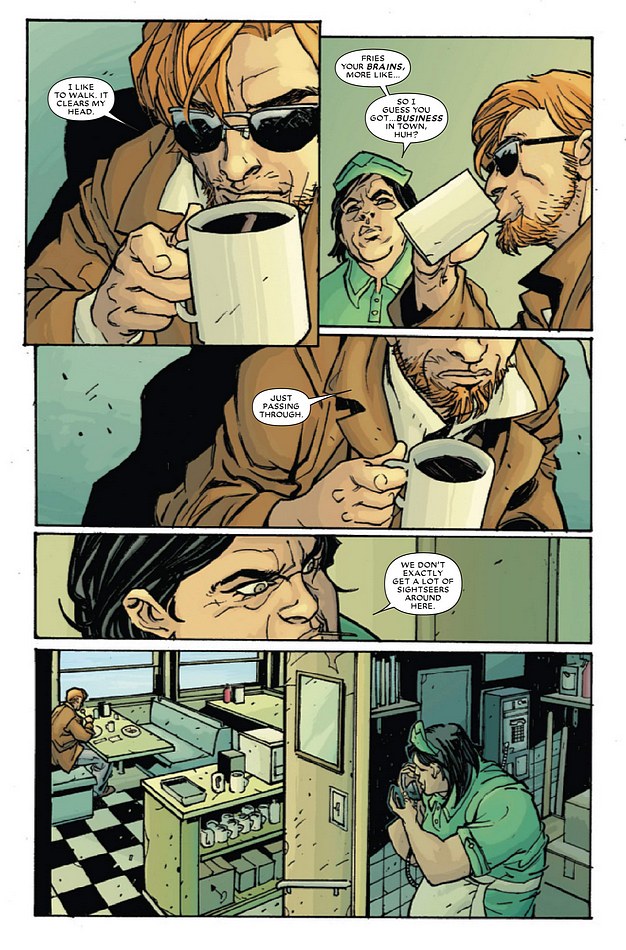 I’m not particularly enthused about the story after the first issue. It feels at least from my perspective that it’s another epilogue for the Shadowland story, which if you’ve followed the story arc of Murdock’s fall from relative grace, it’s something we saw both in the main Daredevil title as well as the Shadowland: After the Fall story. This feels like a continuation of that. Although the Daredevil issue primarily sets up Reborn with Murdock’s cross-country trek to find himself, I’m not sure yet what this is going to add to the overall story beyond the obvious plot point of his finding salvation at the end of the mini-series.

Overall the story was fairly ho-hum, which we should have expected as it’s a first issue after all. It sets the pieces in place for the rest of the series, but not in a way that it’s particularly interesting to anyone other than Daredevil fans. There is certainly a mysterious dynamic to the town and how events may unfold, but a lot of it feels like a rehashing of elements from the Daredevil: Redemption mini-series from several years ago. As a story unto itself, it’s easy to predict what is likely to happen and what will follow coming out of the mini-series in terms of Murdock’s eventual reintegration into the greater Marvel universe. That’s never a good sign. What will make or break this mini-series and ultimately define Diggle’s stamp on the character will be the interactions between Murdock and the characters in the story, and how any development in character from his fall in Shadowland moves the character forward. Following the successes of Bendis and Brubaker, this storyline will define how we perceive Diggle’s entire run on Daredevil and where he falls within the lexicon of Daredevil writers. We’ll see how this fleshes out three issues from now, but I don’t feel like non-Daredevil fans are missing anything but not reading this story.