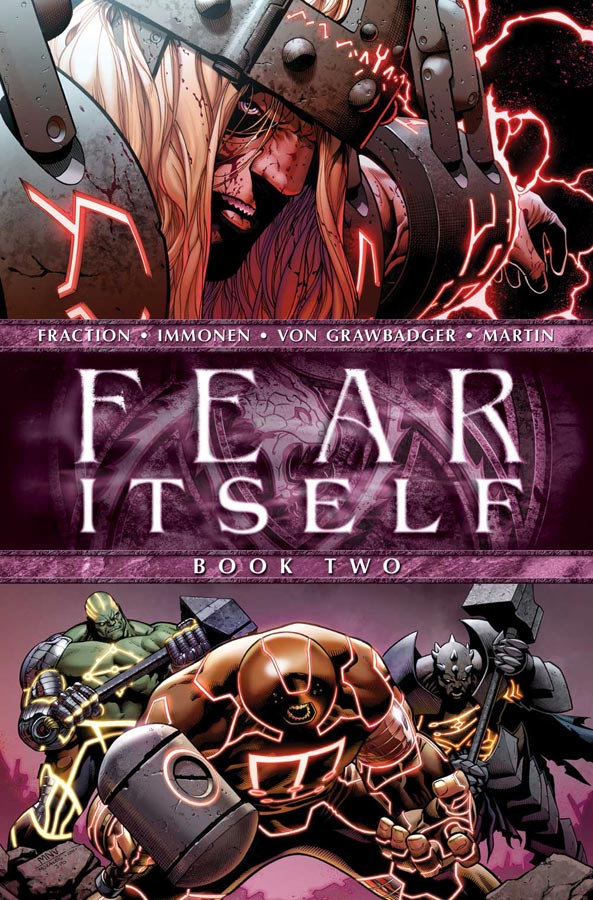 Issue two of Marvel’s huge summer blockbuster series is upon us. I felt the first issue was a little underwhelming, but let’s see if this installment improves the mini-series’ stock among this summer’s biggest books. Forward we go!

There’s nothing to fear except fear itself. In this case, the characters of the Marvel universe are faced with their worst fears as the Serpent slithers into their lives, while Skadi rises with her hammer in tow to reign fear upon the Marvel universe.

With the Asgardians having returned to their plane, Odin moves to prepare for the coming onslaught from Skadi and the Serpent. However doing so includes imprisoning Thor after he questions the authority of his father’s decision to return the Asgardians to Asgard. Odin has Thor shackled and then delivers a speech to the Asgardians, telling them that he has witnessed the rise of the Serpent before, knows what to expect, and knows how to defeat him. Meanwhile on Earth, prominent and physically strong Marvel characters are possessed by entities after touching various hammers that had fallen to earth. They’re infused with god-like capabilities and are completely overtaken by the entities. Elsewhere the Serpent moves his forces out from their Antarctic stronghold and begin to terrorize earth’s citizens, as Steve Rogers, Sharon Carter and Maria Hill watch helplessly from the Shield Helicarrier as events unfold around the world.

Immonen comes through in this issue with some solid pencil work, shining his brightest during the early pages while on Asgard and during the sequences where Marvel characters are possessed once taking ownership of any one of the eight stone hammers scattered around the earth. Martin’s colours add to Immonen’s pencils to create a more cosmic, wondrous element to the book’s art which is otherwise fairly straight-forward. These scenes which take up much of the issue are central and entertaining in their own way, ranging from Juggernaut trashing the Raft, to Hulk’s pseudo-intellectual presumptions about the harmlessness of the hammer, to Absorbing Man’s failure to pick up what would be another’s property. Each contained their nuances which tell their own stories beyond Fraction’s explicit dialogue. Overall I was impressed with the artwork.

Although the first issue was rather lackluster, the second issue of Fear Itself delivered. From Odin’s rallying call and speech to the Asgardians about the forthcoming threat, to the possession of some of the Marvel universe’s physically strongest characters, to the feeling of sheer helplessness Marvel’s brightest are faced with, the issue offers enough punch to carry the story forward. The issue instills a sense of dread for these same characters when faced with the realization that some of their best hopes for success in this battle have been unceremoniously recruited to the other side by the Serpent. With the Marvel heroes’ hands tied, it’s evident the Asgardians will play a central role in saving Earth from the God of Fear and the Serpent’s growing army. This issue creates senses of immediacy and urgency within the characters and the reader, instilling a very real possibility that things couldn’t possibly get worse for these characters, and yet with five issues left, there’s plenty left to fear. After a sluggish start, Fraction’s summer mini-series is off to the races and seems to at least at this point be a worthwhile read that promises an epic battle in every sense.