On May 5th 2011 Heritage Auctions sold the original art from Batman: The Dark Knight Returns issue three page ten for $448125.  That’s right, just shy of half a million dollars for a piece of comic book art. 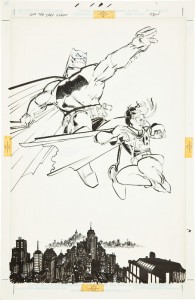 Recorded as the highest price ever paid for original comic art, including Frazetta covers.  This has caused a huge amount of buzz in the collecting community; I can’t imagine what the Dark Knight covers would go for.

There’s no question it has a lot going for it: the seminal comic series of the 1980s that began the dark turn of comic books, penciled by Frank Miller, one page of art that sums up the series in a classic splash page.

I’ve been collecting comic art since 2002 and have seen a dramatic, possibly ridiculous, increase in the price of not only published work but sketches and commissions as well.  While we live in a system of supply and demand hype and nostalgia play a large role.

We’ve seen some crazy prices lately for comic books and now comic art is seeing a big jump.  This is an excellent page but there are so many iconic covers and images out there this may only be the beginning.  Overpriced?  Yes.  Would I like to own it for its place in comics history and as am amazing piece of comic art: absolutely.

As a complete aside Heritage does a great job of posting large scans of their auctions including comic art; go have a browse.